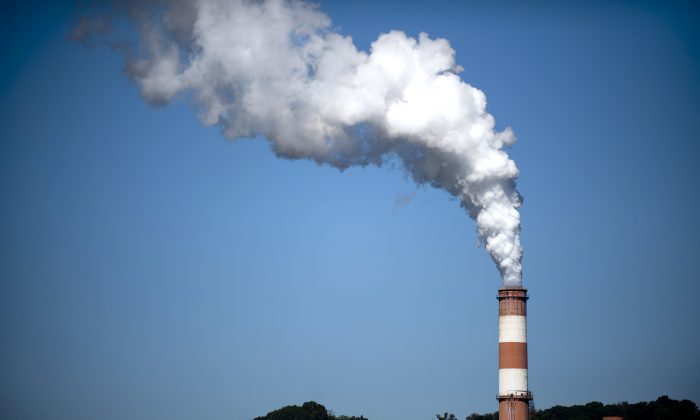 A plume of exhaust extends from the Mitchell Power Station, a coal-fired power plant built along the Monongahela River, 20 miles southwest of Pittsburgh, in New Eagle, Pa., on Sept. 24, 2013. (Jeff Swensen/Getty Images)
US

LOS ANGELES—Air pollution from cars, factories, and power plants are known to trigger asthma attacks. Such pollutants are also linked to heart and lung disease.

And while fossil fuel-fired power plants are the largest source of carbon dioxide gas emissions in America, there are no national limits on emissions from power plants.

The Obama administration’s new proposed plan seeks to change that.

“In just the first year these standards go into effect, up to 100,000 asthma attacks and 2,100 heart attacks will be avoided, and those numbers will go up from there,” said the President on Saturday.

The plan is to reduce carbon emissions 30 percent by 2030, which would approximate the levels from 2005.

At the present stage, the plan is within a 120-day public comment period. Individual states are allowed to come up with their own proposed plans before June 2016. But if a state doesn’t create a viable plan, the EPA may impose a federal plan.

Critics of the proposed regulations, such as Senator Ted Cruz of Texas, said the coal industry will suffer and jobs will be lost within coal mines, power plants, and energy-dependent businesses.

A highly-cited report by the late Stephen M. Meyer of MIT published back in 1995 said, “Neither national nor state economic performance have been significantly or systematically affected by environmental regulation.”

“I think what’s really important here is just to realize that this is just the single largest step that the U.S. has taken thus far to combat climate change, and it comes at a very timely moment,” said Kinman.

Implementing the new plan will be a very lengthy and complex undertaking. However, supporters say the benefits clearly outweigh the cost.

“We’ll also see anywhere between 48 [billion] to 82 billion dollars in health care savings as a result of the programs put in place to curb global warming emissions,” said Kinman. “That’s a really I think stark figure, and a really important figure for people to have in their minds.”

The EPA estimated that for every dollar invested in complying with rules, Americans would gain $7 in health benefits.

Kinman said California is the 12th largest contributor to global warming in the world, but has also been a leader in creating solutions. In 2006, a mandate was enacted to reduce carbon emission across all sectors to 1990 levels by 2020.

In California, transportation is the largest contributor to air pollution, while in the rest of the nation, it’s power plants.

In a statement, Los Angeles Mayor Eric Garcetti said, “Given that electricity generation is our nation’s single greatest source of those emissions, I applaud President Obama and the Environmental Protection Agency for their proposal to limit carbon pollution from power plants, a key step in moving our nation towards a clean energy future.”