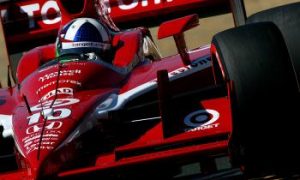 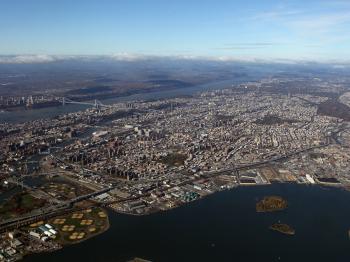 An aerial view of the Bronx and the George Washington Bridge photographed on Nov. 9. (Bruce Bennett/Getty Images )
Opinion

The Nor’easter: The Understated Water Crisis

Evan Mantyk
biggersmaller
Print
NEW YORK—All the fanfare about carbon emissions and climate change is probably overhyped. But, instead of debating the controversial issue, why not take a look at what everyone should agree on?

Everyone should agree that pumping huge amounts of man-made carbon into the air is bad. Carbon is a filthy gas that pollutes our air. Spend a day walking around a busy city, then drive out to the countryside and take a deep breath. I guarantee you will feel the difference. The proof is in the pudding.

The South Bronx has some of the highest rates of asthma in the country. It doesn’t take watching a documentary to figure out why, just go there. The motorways are packed with diesel-burning trucks, and the amount of trees and green space is exceptionally low.

There are real and palpable reasons to move toward cleaner energy and cars with lower emissions; there doesn’t have to be a doomsday scenario involved, and it doesn’t necessarily have to be linked to the recently rising temperatures. It simply has to do with clean air.

The problem with the extreme hype surrounding carbon emissions and climate change is that it eclipses with political might, donor dollars, and innovative momentum what is potentially a more dangerous environmental crisis: the pollution of our water.

In 2008, the Associated Press did an in-depth investigative report that uncovered a large number of pharmaceuticals, including antibiotics, anti-convulsants, mood stabilizers, and sex hormones, in America’s drinking water. They get there from people who take these pharmaceuticals and then urinate or otherwise expel them back into our water system. While the water may be treated by the most high-tech methods before it reaches your parched mouth, it can’t remove the pharmaceuticals, which exist in extremely tiny amounts.

“While researchers do not yet understand the exact risks from decades of persistent exposure to random combinations of low levels of pharmaceuticals, recent studies, which have gone virtually unnoticed by the general public have found alarming effects on human cells and wildlife,” reads the AP report.

But it doesn’t end there. Growing up in Michigan, I remember a beautiful beach on Lake St. Clair near my house that, unfortunately, I never remember swimming in because of the high level of pollution. On days when the level of contamination in the lake was particularly high, the beach was simply closed.

Now, I live in New York, where hydraulic fracking threatens our drinking water. Fracking is a technique that involves pumping pressurized chemical solutions into the ground. It may potentially be used to extract a huge supply of natural gas from the Marcellus Shale region in upstate New York, but also threatens to contaminate the watershed that provides New York’s drinking water.

The powers that be, particularly the Environmental Protection Agency, are still studying fracking and how it can be safely done. For me, the verdict is already in.

In August of this year, Craig and Julie Sautner of Pennsylvania showed up at New York City Hall with a 4-gallon jug of brownish-yellow liquid, which came straight from their once-pristine 500-foot deep family well. Fracking has already begun in Pennsylvania, not far from where the Sautners live.

New York governor-elect Andrew Cuomo has said that any fracking done “must be environmentally sensitive and safe,” but he leaves the door wide open for fracking all the same.

Why is it that our leaders, even the supposedly progressive ones like Cuomo, pay so much attention to carbon emissions and climate change, but are ready to sacrifice our water as soon as a federally-funded scientist says “okie dokie”?

Next time Al Gore goes on tour, someone please tell him to link water pollution to global warming too, not just air pollution.

Evan Mantyk lives in New York and can be reached at evan.mantyk@epochtimes.com.