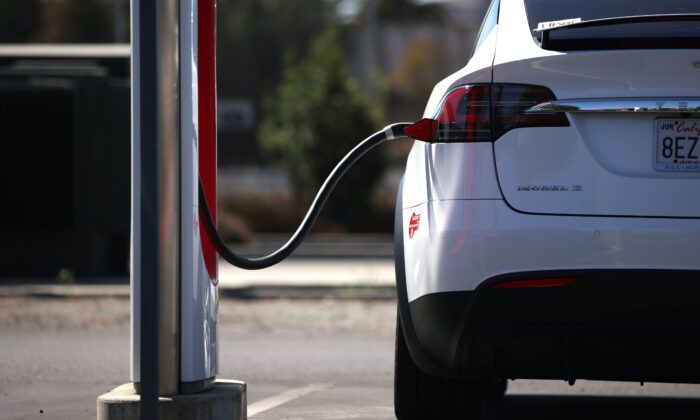 Along with the California Coastal Commission, the California Air Resources Board more resembles a Soviet-style planning agency than a regulatory body in a free republic. The board wields dictatorial power over virtually every aspect of the state’s economy through its hyper-regulation of energy production.

It includes this blurb (the original in italics and no final periods):

Amid global climate talks, the Scoping Plan lays out world’s first detailed pathway to carbon neutrality by 2045, as signed into law by Governor Newsom earlier this year

It’s rather convenient Newsom is pushing a plan that won’t be implemented until long after he has retired from the governor’s office in 2027—or been promoted to the White House. The rest of us who live in this state, and are not as wealthy as he is, will have to put up with whatever comes next.

These goals are unrealistic, especially the one creating 4 million new jobs—except maybe in the moving sector as Californians flee to other states. Yet Newsom intones, “No economy in the world, much less the soon-to-be 4th largest, has put forth such a comprehensive roadmap to reach carbon neutrality.” That’s the old boast of California supposedly being an independent “nation-state,” when it’s really just a subsection of the United States.

Let’s return to the 2022 Scoping Plan itself. The Executive Summary begins by also touting the state as the world’s fifth-largest economy:

This Scoping Plan lays out the sector-by-sector roadmap for California, the world’s fifth largest economy, to achieve carbon neutrality by 2045 or earlier, outlining a technologically feasible, cost-effective, and equity-focused path to achieve the state’s climate target. This is a challenging but necessary goal to minimize the impacts of climate change.

After “fifth” in the document, there’s even a link to a footnote that reads, “In October 2022, California was poised to become the world’s fourth largest economy.” I keep bringing this up because it shows state officials’ delusional arrogance. For one thing, scoring economic strength is far from an exact science. And there are several methods for doing so, such as the common GDP (Gross Domestic Product) and the probably more accurate PPP (Purchasing Power Parity).

California’s alleged prosperity also is distorted by the immense wealth of the tech oligarchs in Silicon Valley, whose equity holdings have taken a big hit this year. But if you subtract them, the rest of us live like the “proles” in Orwell’s “1984,” albeit with great weather.

In the above statement, notice also the three contradictory goals: “technologically feasible, cost-effective, and equity-focused.” As we just saw during the COVID-19 pandemic, what the ruling political elite and its kept scientists think is “technologically feasible”—what they also call The Science—usually has little to do with reality. “Cost-effective” really means you’re going to pay a lot more for energy.

And “equity-focused” means a socialist distribution of wealth, which is the real goal of these schemes. California is the most diverse society ever. And as I keep emphasizing, an obsession with “equity” only will turn everyone against one another, with the politicians at the top divvying up the spoils based on who has the most political clout, or pays the biggest bribes.

Only a return to “equality of opportunity” can hold things together. Indeed, that’s what state voters have embraced two times. First with Proposition 209 in 1996, which was modeled on the Civil Rights Act of 1964, and stipulated: “The state shall not discriminate against, or grant preferential treatment to, any individual or group on the basis of race, sex, color, ethnicity, or national origin in the operation of public employment, public education, or public contracting.”

Second with the overwhelming rejection by voters of Proposition 16 in 2020, which would have repealed Prop. 209.

What this means for California is an ambitious and aggressive approach to decarbonize every sector of the economy, setting us on course for a more equitable and sustainable future in the face of humanity’s greatest existential threat, and ensuring that those who benefit from this transformation include communities hardest hit by climate impacts and the ongoing pollution from the use of fossil fuels. …

The major element of this unprecedented transformation is the aggressive reduction of fossil fuels wherever they are currently used in California, building on and accelerating carbon reduction programs that have been in place for a decade and a half. That means rapidly moving to zero-emission transportation; electrifying the cars, buses, trains, and trucks that now constitute California’s single largest source of planet-warming pollution. It also means phasing out the use of fossil gas used for heating our homes and buildings. It means clamping down on chemicals and refrigerants that are thousands of times more powerful at trapping heat than carbon dioxide (CO2). It means providing our communities with sustainable options for walking, biking, and public transit to reduce reliance on cars and their associated expenses.

Fortunately, the plan doesn’t include building a Carbon Berlin Wall around the state to keep people and industries from fleeing to Texas and Florida, then setting up homes and factories that keep polluting. Maybe that will be in the “2023 Scoping Plan.”

Meanwhile, back in the real world, Politico reported on Nov. 21, “Coal Bounces Back.” The story:

But global coal use is not declining — and may actually produce a record amount of planet-warming pollution by the end of the year.

Despite significant reductions in the United States, where coal plants have shuttered in droves since 2010, global emissions from burning coal remain relatively flat. That’s mostly because Europe and Asia have ramped up production as they struggle with the fallout from Russia’s invasion of Ukraine, writes POLITICO E&E News reporter Benjamin Storrow.

And what about California’s concern with “equity”—that is, helping the poorest people cope with a transition to a non-carbon utopia? CNN reported Nov. 14, “Uganda’s President Museveni slams ‘Western double standards’ over coal mine plans.” The story:

Uganda’s President Yoweri Museveni has slammed Western countries over what he calls a “reprehensible double standard” in their response to the energy crisis brought about by the Russian invasion of Ukraine.

In a Twitter post on Sunday, Museveni singled out Germany for demolishing wind turbines to allow for the expansion of a coal-fueled power plant as Europe battles an energy crisis triggered by the Russia/Ukraine war. …

Germany had proposed phasing out coal-fired power plants by 2030 to reduce carbon emissions. But Europe’s largest economy has now been forced to prioritize energy security over clean energy as gas supplies from Russia froze. Just like Germany, many other European countries are reviving coal projects as alternatives to Russian energy. …

“News from Europe that a vast wind farm is being demolished to make way for a new open-pit coal mine is the reprehensible double standard we in Africa have come to expect. It makes a mockery of Western commitments to climate targets,” the Ugandan leader said, while further describing the move as “the purest hypocrisy.”

When people are at risk of starving or freezing to death, they tend to not pay attention to the climate posturing of Western elites. The “2022 Scoping Report” stretches farther from reality than one of Hollywood’s fantasy concoctions. It hardly will do anything to reduce “climate change” or “global warming” or whatever new phrase is cooked up.

It will damage the state’s economy, most hurting the poor people its “equity” edicts claim to help. It will make billions for those who invest in the climatically favored industries. It’s a scam.