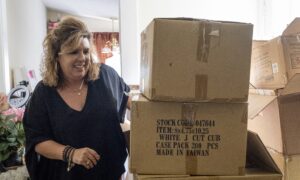 Several hundred members of the lead migrant caravan have reached Tijuana, Mexico, and some scaled the fence on Nov. 13, crossing illegally into the United States before running back, according to Ralph DeSio, spokesman for U.S. Customs and Border Protection (CBP).

DeSio said the individuals ran back “without needing any intervention” from Border Patrol agents.

The incident occurred at the Mexican park adjacent to Border Field State Park on the U.S. side of the border, which is a popular site for gatherings and protests, DeSio said.

CBP has deployed additional resources to ensure the continued security of the border, and safety for everyone in the area,” he said. “Agents remain alert.”

DeSio said CBP is monitoring the movement of caravan members in Mexico.

“At this time, we believe that at least some of those individuals currently gathered in this area are from the caravan,” he said.

An estimated 5,000 migrants are in the lead caravan currently heading to the U.S. border, according to the San Diego-based open border group, Pueblo Sin Fronteras, which is assisting the migrants.

The caravan has been meeting some hurdles along the way, with some cities requesting they leave. The caravan arrived at the city of Guadalajara late Nov. 12, but were asked to move on early on Nov. 13 and were provided transport out of the city. However, Pueblo Sin Fronteras said in a Facebook message, the buses dropped the group off around 90 km (56 miles) from their next pick-up point.

“We call on the governments of the states of Jalisco, Nayarit, and Sinaloa and the civil society to solve this serious problem in order not to leave drift and insecurity to vulnerable families who trusted the word of the state of Jalisco,” the group wrote on Facebook.

CBP has warned travelers that wait times along the southwest border will likely increase “indefinitely” as the caravans reach the border.

“The deployment of our officers to support migrant processing and border security efforts in Arizona and California will have an impact on CBP’s trade and travel facilitation locally,” El Paso director of field operations Hector Mancha said in a statement.

“Cross-border travelers should expect lanes to be closed and anticipate processing times to increase. We suggest reducing or consolidating your cross-border trips, and if you must cross the border, build extra time into your schedule to accommodate these expected delays.”

On Nov. 12, several northbound vehicle lanes at San Ysidro and one lane at Otay Mesa were closed so the U.S. military could install razor wire and other measures to harden the entry point in preparation for the migrant caravan.