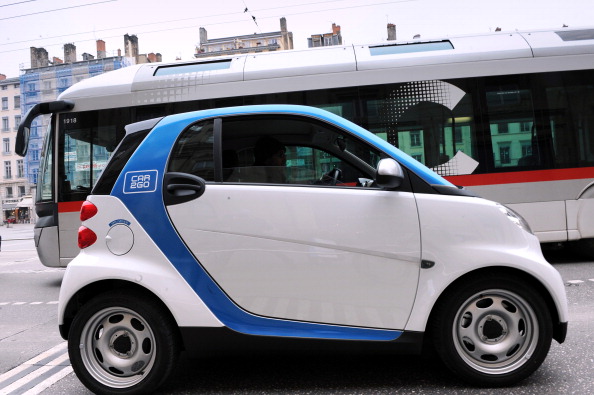 A man drives Smart fortwo coupe pure car2go edition with a Solar roof, on February 1, 2012 in Lyon, during the presentation and launching of the all-electric Daimler’s car2go car-sharing network in the eastern cilty. The company is now operating in Canada alongside other car sharing services. (Philippe Merle/AFP/Getty Images)
Opinion

Car Sharing is Revving Up

A Simple Idea That’s Changing How We Consume

What a Difference 10 months Can Make

On July 21st of 2012 Car2Go came to Alberta. Specifically it came to 93 square kilometers of Calgary’s inner core. The on-demand car sharing service charges $0.38 a minute to use one of its bright blue and white Smart Cars. With over 300 of them, it’s easy to find and book a car using a smart phone app. Swipe your member card across a data card reader located behind the wind screen and off you go.

The big selling point here is convenience; gas, maintenance, insurance, and parking. Oh yes, parking. In a city with downtown parking rates that are second only to New York in North America the convenience of being able to just drop your car off in any City of Calgary spot is invigorating.

“People have responded amazingly. They’ve embraced it with open arms. Within the first 60 days for Car2Go in Calgary, we had 15,000 people sign up right away,” says location manager Jon Wycoco.

The app even provides walking directions to the nearest car while also telling you how much gas is left in the tank. Run by Daimler, the group behind Mercedes Benz, Car2Go is also in Toronto, Vancouver, and 14 other cities around the world.

Car sharing is the most outwardly popular expression of a simple idea that’s changing how we consume. It’s called collaborative consumption and it has been popularized by author and researcher Rachel Botsman in a famous TED talk and book What’s Mine Is Yours: The Rise of Collaborative Consumption.

“One of the biggest selling points for Car2Go is the convenience factor. You can take a car from Point A to Point B and you only pay by the minute. So it’s an on-demand system that allows you to use a Car2Go vehicle for parking, fuel, maintenance, and insurance are all included in the rate,” says Wycoco.

Mobility and convenience—that’s what a car offers and boy, do we Canadians love our cars.

According to Andrew Coyne’s amazing article on road pricing, and my personal experiences, traffic is slowly strangling our cities.

“Indeed, for sheer mind-numbing, soul-destroying aggravation, traffic in our largest cities can compete with any in the developed world,” says Coyne. According to a Toronto Board of Trade study Toronto’s rank in commuting times compared to 19 major cities was dead last. Other Canadian cities didn’t do so hot either: Montreal was 18th, Vancouver 14th, Calgary 13th, Halifax 10th.

And congestion isn’t just aggravating. It’s bad for your economic health. A 2006 Transport Canada study put a number on the cost of congestion—$6.7 billion. A 2008 estimate from Toronto’s regional transportation authority Metrolinx pegged the cost of congestion at $6 billion just for the region alone. All of that wasted time stuck in traffic means a ton of wasted energy and unnecessary greenhouse gas emissions.

A single car sharing vehicle can take anywhere from four to 30 cars off the road according to an American study sponsored by the U.S. federal and California departments of transportation.

Car sharing can liberate people from owning a car altogether or stop them from buying a second car. And some smaller studies have even shown that car sharing can spark a change in behaviour.

Car sharing is also a more effective use of all of the steel and energy needed to manufacture the car in the first place. The less time it sits in a garage and the more time it’s being used for its actual purpose the better.

Worried about your budget? The average cost of car ownership in Canada comes to $7,500 according to the Canadian Automobile Association. That’s enough money to drive a Car2Go smart car 54 minutes a day, every day of the year. And that’s at the most expensive, per minute rate.