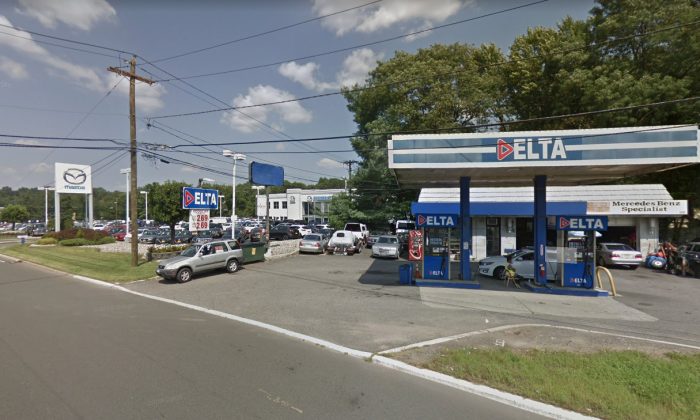 The Delta gas station where 3 people were killed in a crash on Feb. 19, 2019. (Screenshot/Googlemaps)
Crime and Incidents

A car driven by a man allegedly overdosing on drugs plowed into a gas station in New Jersey, killing three people.

The driver survived, and has been charged with multiple crimes, according to local reports, including manslaughter and first-degree death while driving intoxicated.

According to NBC New York, the driver was given naloxone—the substance used to revive opiate abusers from an overdose—at the scene.

The driver was identified by the prosecutor’s office as 29-year-old Jason Venderee, reported North Jersey.

A video shows the moment that the Honda Pilot barrels into the gas station, just as gas station attendant Lovedeep Fatra turns to return the gas pump nozzle after filling up a Chevrolet Camaro on the forecourt. Fatra died in the crash.

The Honda can be seen mounting the Chevrolet before the video cuts out. The roof of the Chevrolet was torn off, and the two occupants—Jon Warbeck, 50, and his 17-year-old son, Luke—were killed.

BREAKING: Don’t think anyone has seen this yet. We asked one of our @PIX11News editors to highlight this tragic video and cut it at the moment of impact. So sad. 3 people killed in this crash on Rt. 23 in Wayne, NJ. The driver – survived. pic.twitter.com/aUWofhHt5R

“​​​​​​They’re great people,” family friend Rick Brattoli told North Jersey. “They’re always willing to help people. If you were broke and down, they would be there for you. They’re that type of people. They were there for you.”

The father would have been celebrating his birthday the next day, his sister, Toni Smith, told Pix11.

She laid flowers at the scene to remember her brother and nephew.

The driver in the fatal crash faces several charges including manslaughter and possession of a controlled dangerous substance.

“You’re having a big party with dad today, and we just miss you all very much,” she said.

Speaking of the driver, Venderee, Smith said, “I’m glad he survived. I hope survives because dying would have been the easy way out for him”

The driver survived after being administered Narcan at the scene, the sources said.

Gas station worker Tito Krishnamurthyhad just stepped away from the gas pumps when the crash happened. He  told NBC, “We’ve never had anything like this before.”

His colleague, Futra, who was killed in the crash was a 22-year-old from India who had moved to America to pursue a better life, reported ABC.

RIP: 23-year-old Lovedeep Fatra was working at a gas station off of a New Jersey highway when a driver, who was…

“His parents are devastated overseas,” said Futra’s cousin, Novdeep Singh. “He speaks to them every day. Day and night. I don’t know what to make of it.”

In total, three cars, including the Honda Pilot, were involved in the crash, which flung debris into a nearby car dealer’s lot, damaging the parked vehicles.

John Schindler, was putting up a sign at the dealership, when he heard a crash. He turned around to see an SUV spinning to a stop, with the driver apparently slumped over in the driver’s seat.