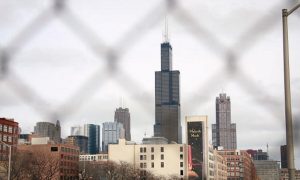 Police were called to the Woodfield Mall in Schaumburg, Illinois, after reports of a car driving through Sears.

The mall was placed on lockdown on  Sept. 20, CBS Chicago reported.

According to Chicago-based station WGN, witnesses saw a black SUV driving through the mall at around 2:30 p.m.

Video footage posted (warning: profanity) on Twitter shows the vehicle driving past a Forever 21 inside the mall as people run away.

The SUV was seen hitting kiosks and slamming into walls.

The incident occurred at the lower portion of the mall.

Schaumburg police and fire officials responded to the scene. Officials from the Cook County Sheriff’s office were also deployed to the mall, the Chicago Tribune reported.

“We have officers on the scene and inside the mall,’’ said a Schaumburg police spokeswoman to the paper.

Witnesses told WGN that the driver was taken into custody. Police haven’t issued a comment on that detail.

No shots were fired in the incident, CBS Chicago reported.

Video footage obtained by CBS2 shows the door to the Sears smashed open, presumably by the vehicle.

Lateef Farooqui told the station that he was on the second floor when he was a Chevy Trailblazer driving in the center of the mall “like you would a shopping cart.”

Farooqui said the driver appeared to be younger, without elaborating.

Photos sent to CBS Chicago also showed people sheltering inside an H&M store inside the mall.

“It was terrifying, it sounded like gunshots,” said one witness in the report.