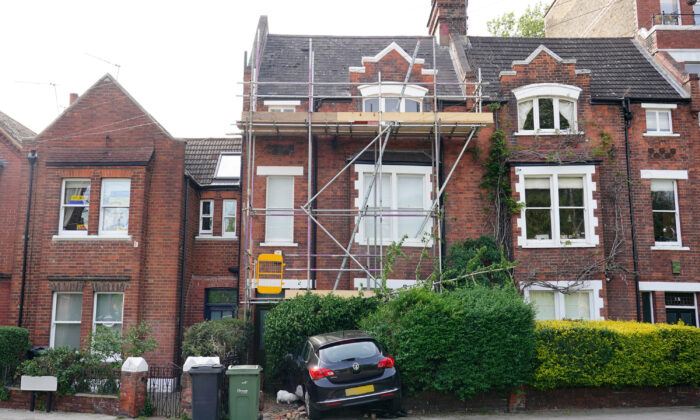 The scene at a £1.3 million townhouse owned by Prime Minister Boris Johnson which was hit by a car in the early hours, in London on May 9, 2022. (Dominic Lipinski/PA Media)
UK

The Metropolitan Police said officers were called to the scene at 1:19 a.m. on Monday following reports of a road traffic collision.

The driver “sustained a minor injury and was assessed by paramedics but did not require hospital treatment,” according to the Met. The force also said it didn’t identify any offence.

The Vauxhall Astra damaged hedges, a tree, and a small pillar in front of the house, and debris was left strewn across the driveway.

The damaged car was left at the scene before being towed away at around 5 p.m. on Monday, and the male driver appeared to be retrieving his possessions from the side door of the vehicle before it was towed away.

According to The Times of London, neighbours said they were woken by a “loud bang” when the incident occurred.

The publication also reported a neighbour saying there had been several cars pulling outside the building while blasting Russian music, with others saying speeding drivers had been using the quiet street to avoid peak traffic recently.

Johnson bought the four-bedroom property with Carrie Johnson for £1.2 million in July 2019—two years before the couple got married—according to Land Registry documents.

The register of MPs’ interests states that the prime minister has a rental income of at least £10,000 ($12,300) a year, but the property appears to be under renovation. According to The Times of London, local residents said it had not been occupied in recent months.

The Johnsons now live at the four-bedroom flat above 11 Downing Street, and reportedly haven’t been to their south London property for two years.