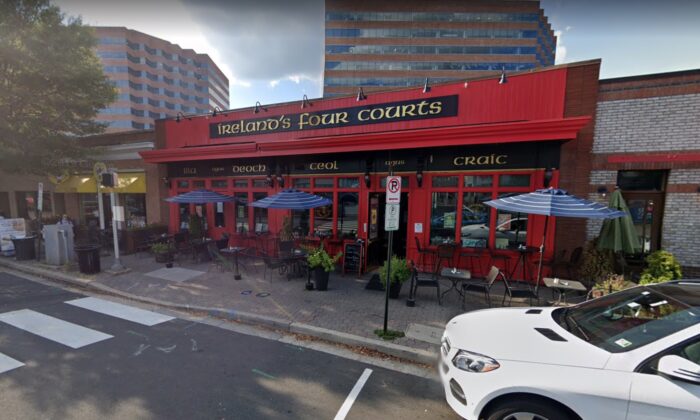 Ireland’s Four Courts where a driver crashed into the restaurant on Aug. 13, 2022. (Google Maps/Screenshot via The Epoch Times)
Regional News

An individual crashed a vehicle into a busy restaurant during peak dinner service in Arlington, Virginia, on Friday night, causing a fire, injuring 14 people, and damaging the building, according to police.

Arlington County Police Department and Arlington Fire Department said they responded to the crash in the 2000 block of Wilson Boulevard on Friday. The cause of the crash is unclear.

Police and emergency services said the crash “caused a structure fire” that has since been extinguished and that “multiple injuries” have been reported.

Eight people were transported to nearby hospitals, four in critical condition and four non-life-threatening, police said in an update. Six of the injured people were treated at the scene and released.

ACPD and @ArlingtonvaFD are investigating a vehicle crash into a building in the 2000 block of Wilson Boulevard. The crash caused a structure fire which has been extinguished. Multiple injuries have been reported. Investigation ongoing. pic.twitter.com/a5BGlg9uet

“Building engineers evaluated the structure and determined it was structurally sound but could not be reoccupied. The investigation remains ongoing,” Arlington Fire Department said in an update on Twitter.

According to local media ARLnow, the car plunged 20 feet inside Ireland’s Four Courts in Courthouse. Photos of the scene show thick black smoke billowing out of the damaged restaurant as emergency responders run inside in the aftermath.

The restaurant’s general manager, Dave Cahill, told ARLnow that none of the staff were seriously injured but that at least one employee was sent to hospital for smoke inhalation.

According to Cahill, the four seriously injured people are thought to be customers who were there for happy hour, ARLnow reported.