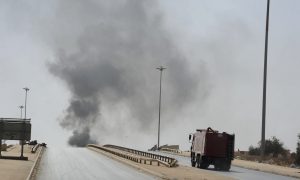 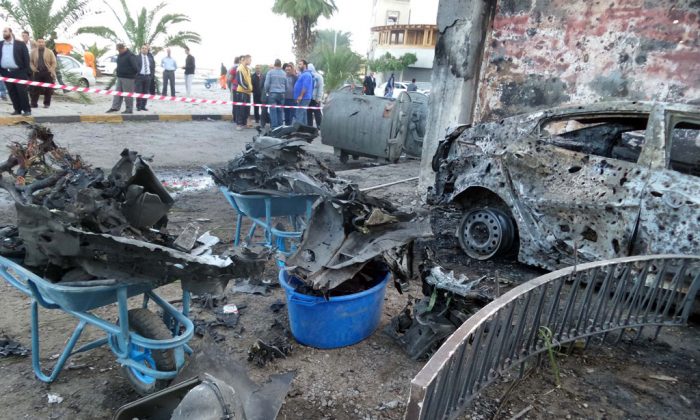 Libyans stand at the scene of car bomb explosion which targeted the compound of the Egyptian embassy in the Libyan capital Tripoli on Nov. 13, 2014. (Mahmud Turkia/AFP/Getty Images)
Africa

TRIPOLI, Libya—Car bombs went off outside the Egyptian and United Arab Emirates embassies in the Libyan capital on Thursday, causing some damage to the long-shuttered buildings but no casualties, officials said.

The near-simultaneous explosions rocked the upscale neighborhood housing foreign missions, said the officials, who spoke on condition of anonymity because they were not authorized to talk to media.

The blasts occurred a day after three car bombs, including one driven by a suicide attacker, struck in the eastern Libyan cities of Tobruk and Bayda, where the elected parliament and government are based. Six people were killed and 21 wounded in those bombings.

Libya is currently mired in the worst fighting since dictator Moammar Gadhafi was overthrown and killed in a 2011 uprising against his four-decade rule. The militia fighting has killed hundreds and displaced tens of thousands.

The Islamist-allied militias accuse the UAE and Egypt of backing their non-Islamist rivals. Egypt has said it is allied with the Libyan government in a war on terrorism.

The U.N. Security Council in a statement Thursday night “condemned in the strongest terms” the attacks on the embassies and condemned all acts of violence against diplomatic locations.

The militias’ capture of Tripoli forced the elected parliament, dominated by non-Islamist lawmakers, and the government it approved, to move to Tobruk and Bayda, which had remained mostly quiet until the attacks Wednesday. Islamist lawmakers in Tripoli have revived an earlier parliament and government. A disputed court ruling has meanwhile invalidated the June elections that brought about the internationally recognized government.

The Tobruk-based parliament has expressed support for a U.N. appeal for a cease-fire, saying in a statement Wednesday that “the political solution is the only way” out of the current crisis.

In the western city of Zuwara, meanwhile, an Italian hostage identified as Marco Vallisa was released on Wednesday, according to the Zuwara Media Center, which is affiliated to the city council. Vallisa was abducted on July 5 along with two other European construction workers who were later released.

It’s not clear who abducted the three, but Zuwara is close to a suspected training camp for Islamic extremists and a hub for smuggling migrants from Africa to Europe.