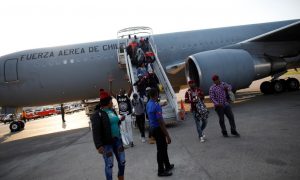 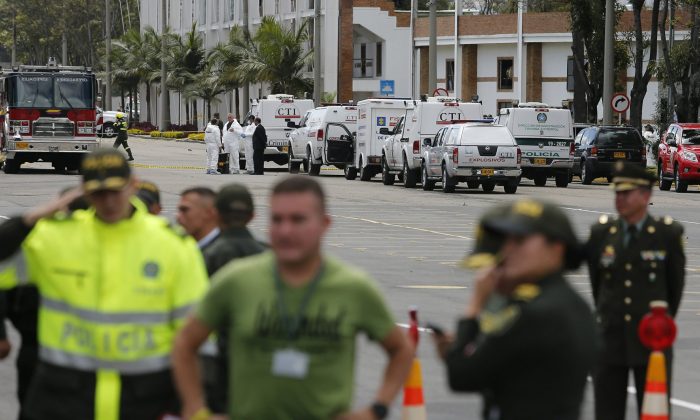 In this image provided by military personnel, emergency personnel respond to the scene of a deadly car bombing at a police academy on Thursday, Jan. 17, 2019, in Bogota, Colombia. (AP Photo)
Americas

A car bomb exploded at a heavily guarded police academy in Colombia’s capital on Jan. 17, killing 10 people and injuring dozens in an attack that recalled the bloodiest chapters of the country’s drug-fueled guerrilla conflict.

The scene outside the General Santander police academy in southern Bogota was chaotic in the aftermath of the mid-morning attack, the biggest against a police or military facility in Bogota in years.

Videos circulating on social media show panicked officers hauling injured colleagues on stretchers with debris and body parts strewn in front of red tile-roofed cadet barracks. In the distance, the skeletal steel remains of the truck used in the attack can be seen still burning while approaching ambulances blare.

President Ivan Duque rushed back to the capital with his top military advisers from a visit to a western state to oversee the police investigation, which points to a possible suicide bombing – something unprecedented in decades of political violence in the Andean nation.

Chief Prosecutor Nestor Martinez said a 56-year-old man named Jose Aldemar Rojas, driving a 1993 Nissan pick-up loaded with 175 pounds of pentolite, carried out the attack. He said the car had its last official mechanical revision some six months ago in the eastern state of Arauca, along the border with Venezuela.

“This is an attack not only against the young, the security forces or the police. It’s an attack against society,” Duque said in a brief statement after surveying the blast scene. “This demented terrorist act will not go unpunished.”

The defense ministry said 10 people were killed and another 66 injured. Among the dead were a Panamanian and an Ecuadorian national.

Rafael Trujillo said he was delivering a care package to his son Gerson, who entered the school just two days ago, when he was stopped in his tracks by the blast that destroyed windows in apartment buildings as far as four blocks away.

“I’m sad and very worried because I don’t have any information about my son,” said Trujillo, standing outside the facility, where police officers had set up a taped perimeter as forensic specialists surveyed the blast site.

Authorities were at a loss to explain how the vehicle slipped through a gate permanently protected by explosive-sniffing dogs, heavily-armed guards and security cameras. But there were unconfirmed reports based on leaked recordings of phone conversations of officers on the scene that the driver rammed through the checkpoint on a kamikaze mission.

Health authorities in Bogota appealed for residents to donate blood at one of four collection points in the capital to help treat those injured, the majority of whom were rushed to a police hospital.

For decades, residents of Bogota lived in fear of being caught in a bombing by leftist rebels or Pablo Escobar’s Medellin drug cartel. But as Colombia’s conflict has wound down, security has improved and residents have lowered their guard.

While authorities had yet to suggest who was behind the attack, and no armed group claimed responsibility, attention was focused on leftist rebels from the National Liberation Army, which has been stepping up attacks on police targets in Colombia amid a standoff with the conservative Duque over how to re-start stalled peace talks.

The group known as the ELN was long considered a lesser military threat than the Revolutionary Armed Forces of Colombia (FARC), whose 7,000 guerrilla fighters disarmed as part of a 2016 peace accord. FARC became the official military wing of the Colombian Communist Party.

But in the wake of the peace deal the Cuban-inspired insurgency has been gaining strength, especially along the eastern border with Venezuela, where it has carried out a number of kidnappings and bombings of oil pipelines. That has hardened Duque’s resolve in refusing to resume peace talks that have been stalled since he took office last August, despite a rebel offer of a cease-fire.

Other possible assailants include the country’s Usuga drug cartel, which has suffered a number of setbacks at the hands of the police, and dissident members of the FARC.

Several foreign leaders condemned the attack, as did the former commanders of the disbanded FARC.

The United Nations peace mission in Colombia called it “an unacceptable criminal act which goes against the efforts the country is making to steer away from the violence, and work … to build a more prosperous and peaceful future.”

An explosion at the upmarket Andino shopping mall in June 2017 killed three people, including a French woman, and injured another 11. Police later arrested several suspected members of a far-left urban guerrilla group called the People Revolutionary’s Movement for the bombing.

But it has been more than a decade since a police or military installation in the capital has suffered a major bombing. A blast at military university in 2006 left almost two dozen people injured.

Ariel Avila, an analyst who tracks violence, said that in the last four years, there have been 28 attacks in the capital with explosives. While the majority has been carried out with low-grade homemade materials and grenades that have damaged property but left no casualties, he said police intelligence and checkpoints surrounding the city need to be reinforced to prevent more attacks.

“We need to fortify the city again,” he told Blu Radio.