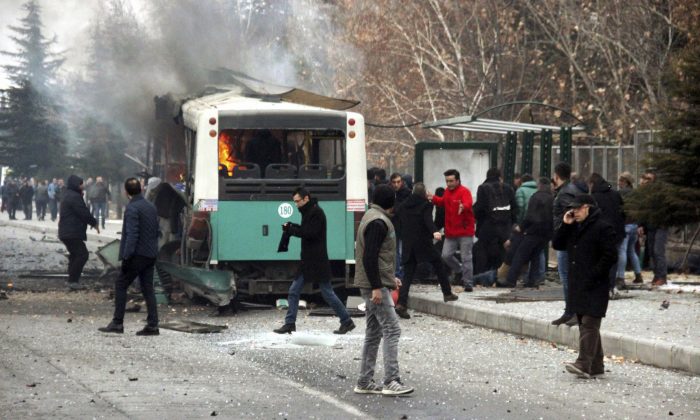 A public bus is burning at the scene of a car bomb attack in central Anatolian city of Kayseri, Turkey, on Dec. 17, 2016. (IHA via AP)
International

ISTANBUL—Thirteen Turkish troops were killed and 48 others wounded in a car bomb attack in the central Anatolian province of Kayseri on Saturday morning, the Turkish military reported.

In a statement, the Turkish armed forces said the car bomb went off at 8:45 a.m. and targeted on-leave military personnel from the Kayseri Commando Brigade.

The wounded were rushed to hospitals in the region. The army said civilians may have also been casualties of the “treacherous attack.”

State-run Anadolu Agency said the car bomb went off at an entrance gate of Erciyes University, hitting a public transportation bus that included on-leave soldiers among its passengers.

Speaking about the Kayseri explosion, Vice Prime Minister Veysi Kaynak said in remarks broadcast on NTV that “treacherous factions” had taken aim at commandos from the Kayseri Airforce Brigade, who had been “training exclusively for the safety of our people.”

Turkey’s prime ministry office imposed a temporary blackout on coverage of the explosion and urged media to refrain from publishing anything that may cause “fear in the public, panic and disorder and which may serve the aims of terrorist organizations.”

Turkey is facing renewed conflict with Kurdish rebels in the southeast and has suffered a string of suicide and car bombing attacks this year.

The blast comes a week after a car bomb struck riot police posted outside a soccer stadium in Istanbul following a match. That attack killed 44 people, mostly police officers, and wounded scores others. Kurdish militants claimed the Istanbul attack.

Turkey is a member of NATO and partner in the U.S.-led coalition against the Islamic State group, which has been blamed for multiple attacks in Turkey.