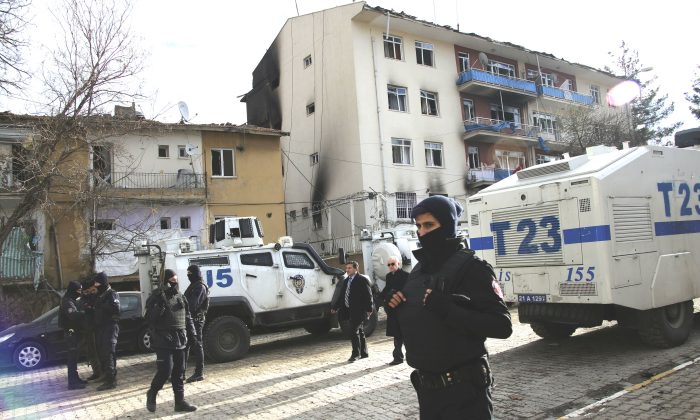 CINAR, Turkey—Kurdish rebels detonated a car bomb at a police station in southeastern Turkey, then attacked it with rocket launchers and firearms, killing six people including civilians, officials said Thursday. Thirty-nine other people were injured.

The attack late Wednesday targeted the police station in the town of Cinar, in the mostly Kurdish Diyarbakir province, and police lodgings located at the building, the Diyarbakir governor’s office said.

The force of the blast caused a house near the police station to collapse.

Prime Minister Ahmet Davutoglu said one police officer and five civilians were killed while 39 people were injured, including six police officers. According to the private Dogan news agency the dead included the wife of a policeman and a 5-months old baby who were killed at the police lodgings and two children who died in the collapsed house.

Another police station was attacked with rocket launchers in Midyat town, in the province of Mardin in what appeared to be a simultaneous assault, the state-run Anadolu Agency reported. No casualties were reported there.

The explosion caused extensive damage, affecting buildings two or three blocks away from the police station. Windows were blown off and shop shutters were folded in from the force of the blast.

The governor’s office said the security forces responded to the attack, but it was not clear if there were any casualties among the rebels.

“We were sleeping and woke up thinking it was an earthquake,” Shafee Dagli, a Cinar resident told The Associated Press. “Then the clashes started. They lasted for about 2 1/2 hours, from 11.30 p.m. to 2 a.m.”

Hediye 0zaltay, mother of five living behind the police station said: “We were so frightened. We were awake watching TV. All these fragments blew into our yard from the blast. At first we thought there was an earthquake then I looked at the police station and saw fire.”

The attack came a day after a suicide bomber set off an explosion in Istanbul’s historic Sultanahmet district, just steps away from the landmark Blue Mosque, killing 10 German tourists. Turkish officials say the bomber, a Syrian born in 1988, was affiliated with the Islamic State group.

Hundreds of people gathered at the site of that attack on Thursday, to lay flowers and hold a minute of silence.

Five people have been detained in connection to the Istanbul bombing, authorities have said.

Clashes between Turkey’s security forces and the rebels of the Kurdistan Workers’ Party, or PKK, reignited in July, shattering a fragile peace process.

Authorities have since imposed extended curfews in flashpoint neighborhoods and towns in the mainly Kurdish-populated southeast region of the country as the security forces battle Kurdish militants who are linked to the PKK. Those militants have mounted barricades, dug trenches and set up explosives to keep authorities away. The operations have resulted in more than a hundred civilian casualties, and displaced thousands, human rights groups say.

The conflict between the government forces and the PKK has killed tens of thousands of people since 1984. The group is considered a terror organization by Turkey and its western allies.

On Thursday, mourners at Cinar buried three of the dead — Lokman Acikgoz, who owned a local shop, and his two sons.