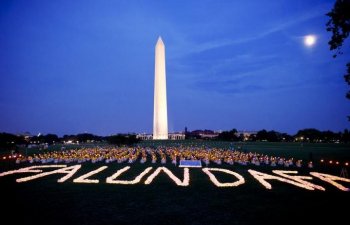 The night of July 22, 11 years since the Chinese Communist Party outlawed the peaceful meditation practice Falun Gong, practitioners gathered at the Washington Monument in the nation's capital commemorate the lives lost and the suffering caused by the persecution. (Dai Bing/Epoch Times Staff)
US

Ronny Dorry
View profile
Follow
biggersmaller
Print
WASHINGTON—Passersby were mesmerized by the glowing lights on Thursday night, as hundreds of people gathered at the base of the Washington Monument in the nation's capital for a candlelight vigil to commemorate 11 years since the beginning of the persecution of the Falun Gong spiritual practice in China.

Falun Gong (also known as Falun Dafa) practitioners silently held glowing candles in small cups, which created a lantern-like effect. The event attracted many passersby, who stopped to learn about the persecution.

In contrast to the harsh treatment of their brethren in China, practitioners in Washington meditated in peace, while vocal, instrumental, and choral music played in the background.

“This full-scale war rushed into our lives, [but] the only weapons we’ve wielded have been truth and beauty. And after 11 years, it is clear that our hearts can overcome any device of men, because the weapons of the Chinese Communist Party can only kill people, but our weapons, our hearts can save people,” said Jared Pearman, one of the MCs of the event.

According to the Falun Dafa Information Center (FDIC), the persecution of Falun Gong began on July 20, 1999, at the orders of Jiang Zemin, the former head of the Chinese Communist Party, commencing with a propaganda campaign to vilify the practice. Falun Gong adherents were illegally detained and placed into forced labor camps, where they suffered inhumane forms of torture, including being shocked with electric batons, burned with scalding irons, and force-fed.

Falun Gong practitioners in China continue to suffer intimidation, imprisonment, torture, and death. The 2010 FDIC annual report documented that 109 adherents of the practice died as a result of torture and abuse in 2009, and over 2,000 more were arbitrarily sentenced to forced labor or prison. Over half of the detainees in the Chinese forced labor camps are Falun Gong practitioners.

According to Clearwisdom.net, a website that documents the persecution with firsthand accounts from China, more than 3,000 deaths of Falun Gong practitioners have been confirmed. The actual number is believed to be much higher.

“The courage of the Chinese people grows with each day, and tens of millions of people have now spoken out with calls for freedom and justice, as they renounce their affiliations with the Chinese Communist Party and come to support human rights,” Pearman said.