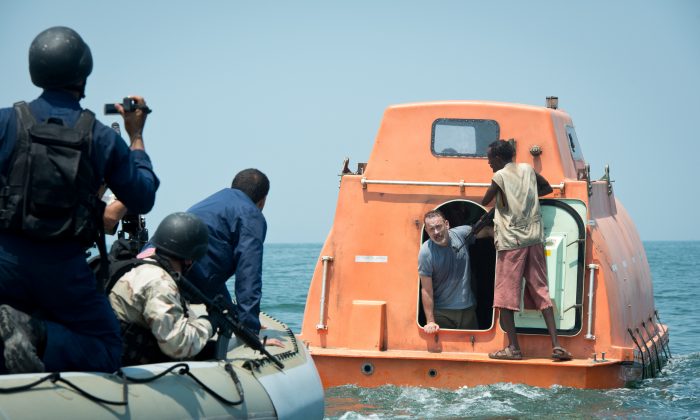 In 2009, when the MV Maersk Alabama was hijacked by Somali pirates, it was carrying 5,000 tons of African relief supplies. No matter how desperate the poverty of its outlaw assailants might have been, waylaying the ship would not make the world a better place.

The facts of the Maersk Alabama case are well-known, and Greengrass sticks to them relatively faithfully. Although an experienced merchant officer, Captain Richard Phillips is a little uneasy about his Oman-to-Mombasa cargo haul, for good reasons. Their route will take them past the Somali coast, soon after the release of a heightened piracy advisory.

Of course, the ship is attacked by pirates—twice. The first time, Phillips’s well-drilled crew foils their assault through evasive maneuvers and improvised trickery. Unfortunately, they cannot shake Abduwali Abdukhadir Muse and his three criminal accomplices the next day.

However, the crew fights back admirably, preventing the pirates from assuming operational control of the vessel. Yet, in a frustrating twist of fate, Captain Phillips is taken hostage aboard the Maersk Alabama’s lifeboat.

As a tick-tock hijacking thriller, “Captain Phillips” is not bad at all, but it suffers when compared to Tobias Lindholm’s recently released “A Hijacking,” which is a superior film in every respect.

Frankly, Greengrass’s film can be divided into two halves, the first being considerably stronger than the second. “Captain Phillips” is indeed quite riveting when following Phillips and his hidden crew as they sneak about and devise ways to communicate with each other.

Oddly, though, the film slackens somewhat once the action moves to the lifeboat. The tension ought to increase in such a considerably more confined space, but Greengrass cranks up the deterministic angst to such an extent that it starts to undercut the suspense. Captain Phillips almost serves as a Greek chorus, warning Muse that it will all end in tears.

Still, Muse’s already much quoted and scoffed-at rejoinder “maybe in America” (as in maybe you Western capitalists have other options besides piracy) poorly serves the rest of the film. It is not nearly as didactic as that sound bite suggests, making its inclusion in trailers an utterly baffling marketing decision.

Greengrass bends over backward to portray Muse and his cohorts as the pawns of shadowy masterminds, who have abandoned them to their fate. Somehow, though, he never spells out their possible connection to al-Qaeda-linked al-Shabab, and he certainly isn’t about to get into the whole Islam thing.

Despite an inconsistent New England accent, Tom Hanks finds the appropriate balance of world-weariness and Yankee gravitas for the title character. He goes all out down the stretch in hopes of another little gold statue, with interesting if imperfect results.

Yet, the real stars of “Captain Phillips” are the imposing Maersk Alabama (or rather the nearly identical Maersk Alexander, which serves as its stand-in) and the U.S. Navy.

The ships (including the USS Truxtun doubling for the USS Bainbridge) look awe-inspiring, and the Navy SEALs are cool, calm, and deadly professional. Even though the Navy employs forms of deception, not once will reasonable viewers question the actions they take.

Greengrass shows a tremendous facility for shooting in and around the hulking ships and making the complicated chain of events perfectly clear and easy to follow. As a technical feat, the movie is hugely impressive. Yet, it lacks the insight and soul-draining intensity of its Danish counterpart.

Reviewer gives this film 3.5 out of 5 stars.