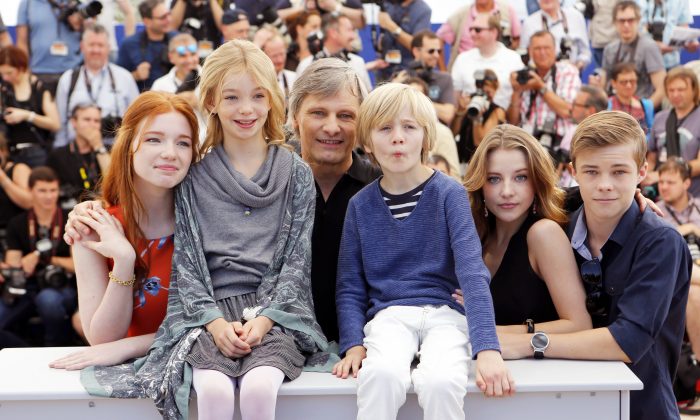 ‘Captain Fantastic’ Is a Swiss Family Robinson for Today

CANNES, France — In the film “Captain Fantastic,” Viggo Mortensen plays one of the all-time great movie dads. In a teepee in remote Washington State, he’s raising six children like a modern-day Swiss Family Robinson. The children, well-behaved and smart, are equally adept at skinning a deer and reading “The Brothers Karamazov” by the campfire. They pine after boning knives like most kid do iPhones.

For audiences at the Cannes Film Festival and the Sundance Film Festival (where it first premiered before landing in France), “Captain Fantastic” has resonated as a movie for its time: a heartfelt and comic exploration about whether our hyper-digital, cacophonous lives have strayed from important things.

“It feels like one of those movies that has connected with something related to U.S. society right now,” Mortensen said Wednesday while smoking a cigarette on a Cannes rooftop patio. “People get bewildered and think: ‘I can’t do that. I’m not going to skin a f—ing deer.’ But there are other things you can do.”

The film is the second directing feature for Matt Ross, a veteran actor known to many as Gavin Belson on HBO’s “Silicon Valley.” In “Captain Fantastic,” the idyll of the family’s off-the-grid existence is challenged when their mother dies. A bus trip to her New Mexico parents (long critics of their lifestyle choices) confronts the kids with normal American life and teases out questions about their highly educated but socially removed upbringing. Should 8-year-olds really be climbing rock faces?

Ross acknowledges there are some autobiographical aspects to the tale. His mother, he says, was “a seeker” and he grew up partly in alternative living communities. (“They were hippie communes but they weren’t really hippie communes because it was the ’80s,” he jokes.) He has lived in a teepee in the summer and does, like his fictional family, celebrate Noam Chomsky Day. (“He’s my hero,” he says.)

But the film, which opens in theaters July 8, mostly came out of Ross’s own parenting. He and his wife, who live in Berkeley, California, have a 13-year-old daughter and 8-year-old son.

“I had a lot of questions about being a father and a parent, and I wanted to contextualize it or dramatize it,” says Ross. “And I was sort of butting up against our culture and who we are as a country.”

Ross shot the Pacific Northwest half of the film in Washington, and had his cast come out two weeks early to help build the family’s home.

What Makes a Film Flop?

“There were many things on some scale I had to learn for this,” says Mortensen. “I’m not that kind of parent. I don’t have his way of reasoning. But I do connect to certain things and approve of other things. I was very happy to be in the woods.”

It’s the kind of preparation that Mortensen relishes. He lives his movies; the process for him is as much a part of it as the finished film. For “The Lord of the Rings,” he slept outside with his sword. For David Cronenberg’s “Eastern Promises” (Mortensen’s lone Oscar nomination), he briefly lived in Russia and suggested his character’s extensive Russian mafia tattoos. On “Captain Fantastic,” he built a garden.

“I like to bring objects, ideas. And I like to work with directors who aren’t threatened by that. It’s just my process and it helps me,” says Mortensen, who also writes poetry, composes classical music and founded his own publishing company. “I just want to make the most of each moment we’re filming, in terms of preparing it and doing it, but also as a human being. This is part of my life. It’s not just a fiction.”

At their photo call in Cannes, the group held up a Bernie Sanders T-shirt. But while “Captain Fantastic” is proudly liberal, its conclusion rests on compromise with the father’s conservative in-laws.

Both Ross and Mortensen, though, are trouble by the country’s direction. “That it’s a country of immigrants has magically disappeared in some people’s minds,” Mortensen, who grew up in Argentina, upstate New York and Denmark, says, shaking his head.

“It’s asking you to be present and not just on autopilot,” says Ross. “I hope it has an impact. I hope it does.”