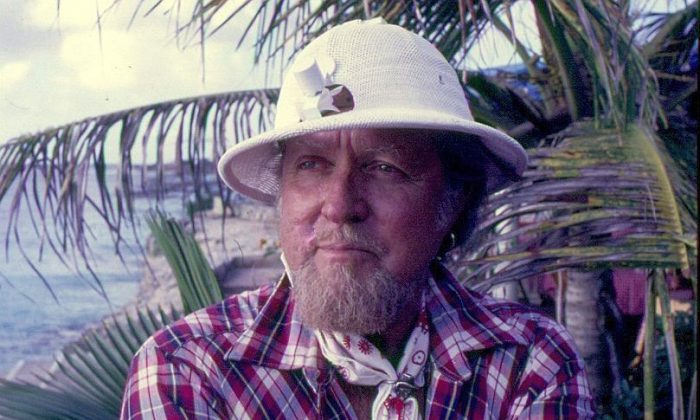 Captain Don Stewart landed on Bonaire in his sinking sailboat in 1962. Dutch authorities told him to make himself useful of leave. He died on Bonaire May 28, 2014, after 52 years of useful life on the island. (John Christopher Fine copyright 2014)
News

He was checking a family in at Habitat on Bonaire. The reception area was just a small booth. For all intents and purposes, Captain Don, for whom Habitat was named, was cranky. The family arrived in a taxi from the airport after nightfall. Nobody else was around to check them in. Don didn’t volunteer to show them their room, rather pointed them in the direction where it could be found.

Captain Don’s Habitat was primitive in its beginnings. The idea was to have a place where divers could dive all day and all night if they wished, socialize at the veranda bar under a thatch roof and sleep the few hours away until dawn when they could dive again. What rules there were, were also primitive and most involved having a place on the dock to stow gear and not to damage coral through clumsy diving.

We moved into the restaurant and bar area out on the veranda to continue our conversation. It wasn’t really a conversation. Don was talking, I listened. The restaurant closed down, waiters went home. The bartender served drinks to divers that decided not to move from their perches on the veranda. Don enjoyed a tropical drink at that time and went into the kitchen to see what was left over. He wasted nothing. He came back and in short order the cook brought him a plate of what other diners had not eaten. It looked something like pasta but I couldn’t be sure.

It didn’t take long before the father of the family that checked in came to find Captain Don. He complained that there were furry creatures running around their room. Don got up from the table, went back to the reception area and took a well-worn BB gun out from under the counter. The father was somewhat surprised by Don’s do-it-yourself mouser, took the BB gun and went back to their room leaving Don free again to walk back to the veranda with me and get back to his now perfectly cold meal and hot drink.

Don asked me some questions. I answered them and he asked more. He was particularly interested in ocean environment issues. He was also concerned that the red dive flag with its horizontal white stripe might be replaced with the international blue and white alpha flag.

He had opinions. Most concerned protecting Bonaire’s reefs. It was clear that the island’s economy was intertwined with its ecology. Divers came to dive. They plunked down hard cash at Captain Don’t Habitat to dive every waking moment and sleep with mice. No reefs, no diving. Reefs everywhere in the Caribbean were under attack. Jamaica was barren. Dynamite fishing and over fishing got rid of the fish. Assaults from estuarine pollution carrying phosphates, nitrogen and human and animal waste killed whole offshore reefs of island states. Colonies and nations of the Americas facing the Atlantic Ocean and Caribbean Sea were under attack by self-pollutants.

Cartoonist Irwin Hasen was coming back to Bonaire. Hasen worked for the Tribune Media Syndicate and created the world famous cartoon character ‘Dondi.’ The soulful, black eyed World War II orphan worked his way into the hearts of millions of readers every Sunday. ‘Dondi’ came to Bonaire and met Captain Don who featured in the popular cartoon strip. It helped popularize Don’s philosophy: save Bonaire’s reefs.

Don’s eating habits were peculiar. He was frugal and not wasteful, lived on an island where nothing was easy to get and lived simply. His sailboat sank on Bonaire shortly after his arrival on May 21, 1962. There he was a marooned sailor. Hardly what proper Dutch authorities thought was a fitting attribute to their culture and authority. They let the American stay providing he caused no trouble and supported himself. The days of 1962 were sparse indeed. All Don had was his sunken sailboat and that, the ‘Valerie Queen,’ was of little use when it limped into Bonaire’s unpronounceable and certainly unspellable harbor and promptly sank.

The Dutch were stuck with him and his mostly-affable nature. His eventual usefulness kept them from throwing him out. Don was 37 years old and without prospects when he was marooned on Bonaire. Kind of over the hill for a beach bum. Don sought work and got involved with hotels, set up Scuba diving operations and little by little became an impresario.

And in Bonaire he stayed. I signed one of my books to him a few days later with my little fish symbol. Silly enough; we were divers and that was part of the fun. He was nonchalant. An employee came to the table on Habitat’s veranda and quit. It was a squabble. The young man’s pride was hurt. Don had to sign the papers and write a check. He had Habitat’s tattered check book on the table along with mail and a pile of papers that looked like bills.

“My signature is recognized at the bank.” Captain Don signed the discharge paper and then a check with his scrawl and symbol. Indeed the bank in town recognized and honored it.

I never saw the family with the mouse problem again. Whether they stayed their week at Habitat or not I never asked. Long afterwards Don alleged to me that Habitat’s problem was not mice rather cockroaches for which he armed his guests.

I went diving every day. The water was warm and inviting. It was so clear that no back-scatter got into my pictures. The little island of Klein Bonaire offered deep dives in clear blue water.

My friend John Stoneman was on Bonaire to make a motion picture. John was a dedicated filmmaker working with Canadian television where his documentaries aired every week. John’s devotion to protection of the environment meshed with Captain Don’s views. They became close friends and worked together on the film.

How it happened I don’t exactly remember. Nick Caloyianis arrived to take pictures on Bonaire. I met him going into the dining room before he actually saw John Stoneman. We cooked up a joke I would play on John since he didn’t know I was on the island. Whatever silly thing I did, it worked and we had a good laugh when we all finally sat at table.

I dove with Nick off Klein Bonaire next day. It was tranquil. Over the deep the water was a clear inviting blue. Don never knew how deep we dived down but the images were spectacular. Deep, clear blue with a bright sky over head. Nick was in a hurry. He had to get pictures on assignment. He wanted to get the shots he needed and return to Baltimore.

It was then that our diverse philosophies of life became apparent. Nick wanted to complete a ten- day assignment in three days. I wanted to complete a three-day assignment in ten days. And why not? Captain Don was an engaging personality. He put on his pirate act for tourists and put on his pirate act for himself. He was the nicest pirate I knew. Well cranky at times, yet so dedicated to his beliefs that he convinced the government on Bonaire to take important conservation measures.

Permanent moorings, protection of reefs, preservation of marine resources, steps to prevent pollution. Bonaire, smallest of the three Dutch ABC islands, some 37 miles off Venezuela, became a divers destination. There were large hotels and casinos on Aruba and Curacao. Diving was good on the larger islands, nothing like the dedicated diving on Bonaire. Captain Don made sure that the reefs would remain pristine and that Bonaire would be a diver’s paradise.

Captain Don is in divers paradise now. He died on May 28, 2014. A while back he told me he had his leg amputated. I guess the pain and turmoil that an old injury caused him provoked his decision. Don volunteered to help on a ship that sailed into Bonaire. I can only pronounce it as the ‘Urka-Jerka.’ He fell backwards overside while working. His leg got caught in rigging. Don hung there by his ankle until he was rescued. The accident caused grave damage to his muscles and tendons. It caused him to limp. When he dove he put some kind of a plastic cast on it.

Captain Don and his mate Janet Thibault and I remained friends over many years. Don seldom left the island. When he was to receive the JOHN STONEMAN MARINE ENVIRONMENTAL AWARD that included airfare to a film festival to accept the honor, Don declined the trip. He asked that the money they would spend be donated to an environmental cause.

In the end I didn’t get back to Bonaire soon enough. Captain Don’s work is yet unfinished. He and Janet became organic farmers, created a tree nursery and used their own power to generate electricity off the grid.

His work will never be finished. Ocean environmental problems Captain Don recognized very early on and sought to correct continue. There are more assaults and insults to coral reefs now than in 1962 when Don landed in Bonaire. Don and Janet’s inspiration is a beacon to guide our course as divers and toilers in the sea. So long as we glimpse that light, Don will live forever.