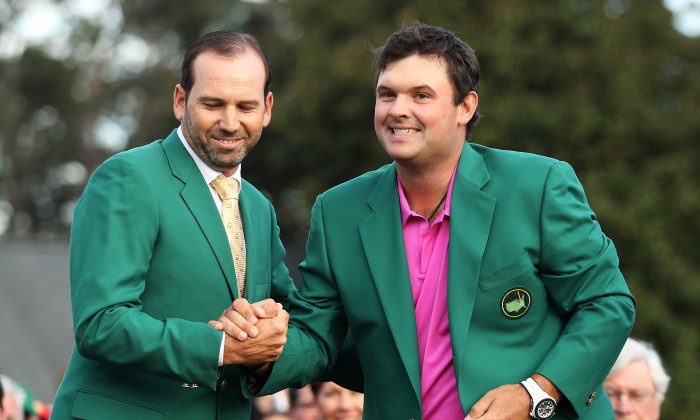 Patrick Reed (R) is congratulated by Sergio Garcia after being presented the green jacket for winning the 2018 Masters Tournament at Augusta National Golf Club on April 8, 2018 in Augusta, Georgia. (Patrick Smith/Getty Images)
Golf

But his solo career, while good at times, paled against the likes of fellow contemporaries such as Rory McIlroy, Jordan Spieth, and Justin Thomas. Only at last year’s PGA Championship did Reed earn his first top-10 finish in a major.

For the Texan, his first major championship has now changed the conversation big time. Reed fended off a host of challengers—most notably Spieth, who closed with a 64, and another surging contemporary in Rickie Fowler, who birdied the final hole, forcing Reed to par the 18th to claim the green jacket.

Before winning this year’s Masters, Reed’s PGA Tour career featured five wins. But in five previous visits to Augusta, he had never finished in the top 20 and that included two missed cuts.

After turning professional in 2011, Reed made it a point to boast after winning just his third professional tournament—the 2014 WGC-Cadillac Championship at Doral—that he was among the top five players in the world. That bit of self-promotion did not earn him points among his fellow professional brethren.

Seen as a talented player, but one who talked more than he delivered, that viewpoint began to change with Reed’s stellar play during team competitions—most notably at the 2014 and 2016 Ryder Cup Matches.

Reed became the emotional catalyst executing at crucial moments time after time. In those two matches, Reed suffered only one loss, while earning seven points. His biggest victory was the mano-a-mano defeat of McIlroy in the lead off singles match during the 2016 Ryder Cup at Hazeltine National, which became the catalyst in leading the Americans to their first win in the event since 2008.

Interestingly, Reed was paired with McIlroy for this year’s final round at Augusta and after the man from Northern Ireland fired a 65 on Saturday to draw within three shots, the makings for a rematch of the scintillating golf the two produced two years ago looked inevitable. Unfortunately, McIlroy’s balky putter re-emerged and he faded with a final round 74 and a tie for fifth. The glory of a career grand slam will have wait another year for him.

Reed showed much in Friday’s second round firing a six-under-par 66 and establishing a two-stroke lead over Aussie Mark Leishman—a lead he would never surrender.

The familiarity of the Augusta area is nothing new for him. Reed played at nearby Augusta University, leading the team to two consecutive NCAA Division I team titles.

In previous tournaments, it was common for Reed to wear his favored red golf shirt for a Sunday final round following in the footsteps of another golfer, Tiger Woods, who made the color red his calling card when winning numerous events. Reed eschewed the color for the final round and won while wearing pink.

Closing out a major championship when leading entering the final round is the hardest test for any professional golfer. One’s ultimate standing in the game is based primarily on the wherewithal to perform at golf’s grandest stages.

Reed demonstrated much with his first major championship title. Plenty of hiccups could have easily happened and Reed’s nerve to make crucial pars at the 71st and 72nd holes were clear signs he pushed through when others succumbed.

Captain America had best be ready for what lies ahead. The vanquished foes at this year’s Masters will most certainly be looking for redemption.

Being a real life super hero can be a much harder chore than the comic book variety. For Reed, the green jacket he now wears may not be the red, white, and blue colors of Captain America, but the view from the top of the golf mountaintop he occupies now is one he’s rightly relishing.