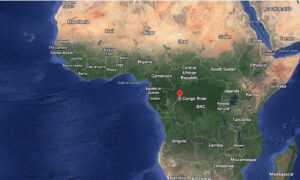 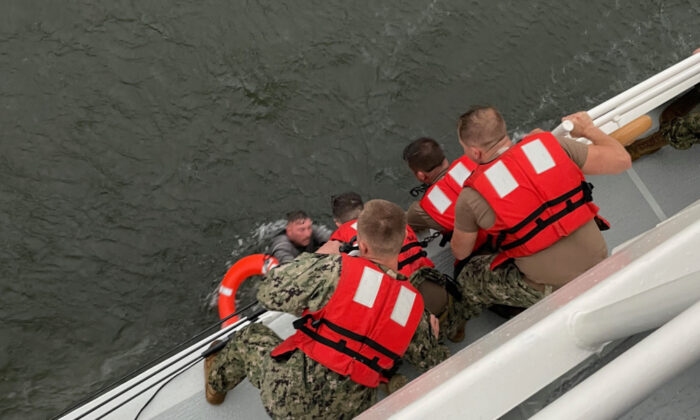 PORT FOURCHON—Coast Guard boats and aircraft have covered an area larger than the state of Rhode Island to search for 12 people still missing Wednesday off the Louisiana coast after their offshore oilfield vessel capsized in hurricane-force winds.

One worker’s body was recovered Wednesday and six people were rescued Tuesday after the Seacor Power overturned Tuesday afternoon in the Gulf of Mexico, the Coast Guard said.

The search, interrupted by darkness and bad weather, has totaled nearly 40 hours and more than 1,440 square miles of Gulf waters by Wednesday afternoon, according to a news release. The hunt for the missing continued into the evening, said Petty Officer Carlos Galarza.

Coast Guard Capt. Will Watson said earlier that winds were 80 to 90 mph and waves rose 7 to 9 feet high when the lift boat overturned.

“That’s challenging under any circumstance,” Watson said. “We don’t know the degree to which that contributed to what happened, but we do know those are challenging conditions to be out in the maritime environment.”

The bulky vessel, also called a jackup rig because it has three long legs it can lower to the sea floor to lift the boat out of the water as an offshore platform, flipped over Tuesday afternoon south of Port Fourchon, a major base for the U.S. oil and gas industry.

One worker was found dead on the surface of the water, Watson said at a news conference Wednesday. Asked about the missing workers’ prospects, he said, “We are hopeful. We can’t do this work if you’re not optimistic, if you’re not hopeful.”

Numerous other agencies helped with the search.

Marion Cuyler, the fiancée of crane operator Chaz Morales, was waiting with family of other missing workers at a Port Fourchon fire station near a landing site where helicopters were coming and going. She said she talked to her fiancé before he left Tuesday.

“He said that they were jacking down and they were about to head out, and I’m like, ‘The weather’s too bad. You need to come home.’ And he’s like, ‘I wish I could.’”

The relationship of those on board to owner Seacor Marine was not immediately clear. The boat, capable of working in up to 195 feet of water, can carry a crew of 12, two “special personnel” and 36 passengers, according to the company website.

“We are deeply saddened by the news of the vessel capsizing and are working closely with the U.S. Coast Guard and local authorities to support all efforts to locate our valued team members and partners,” the Houston-based company said in a statement.

Watson said the Coast Guard is investigating what part the harsh weather played in the accident. The vessel left Port Fourchon at 1:30 p.m. Tuesday, bound for Main Pass off the southeast Louisiana coast, he said.

“We did have some weather reports yesterday that there would be some challenging weather. But this level of weather was not necessarily anticipated,” he said.

The Coast Guard received a distress message from a good Samaritan at 4:30 p.m. and issued an urgent marine broadcast that prompted multiple private vessels in the area to respond, saving four people, the agency said. Coast Guard crews rescued another two people.

At one point, video showed the boat—129 feet long at its beam—with one leg pointed awkwardly skyward as rescuers searched the heaving water.

Although the Coast Guard said the lift boat capsized during a microburst, a National Weather Service meteorologist said the system was more like an offshore derecho—or straight winds storm.

“This was not a microburst—just a broad straight-line wind event that swept over a huge area,” Phil Grigsby said.

He said the weather service’s nearest official gauge, at Grand Isle, showed about 30 minutes of 75 mph winds, followed by hours of winds over 50 mph.

The initial storm system was followed by a low-pressure system called a wake low, which amplified the winds and made them last longer, Grigsby said.

“It was the strongest wake low I’ve seen in almost 18 years here,” he said.

“There was nothing we could do. One minute we were facing north, the next south, then east and west,” he said. “Things were flying in the cabin.’

Callais posted video on Facebook of wind battering the boat as he talked on the boat’s satellite phone to friends and family, including his dad, “letting him know the situation, that it wasn’t looking good. We didn’t know if we were going to make it out.”