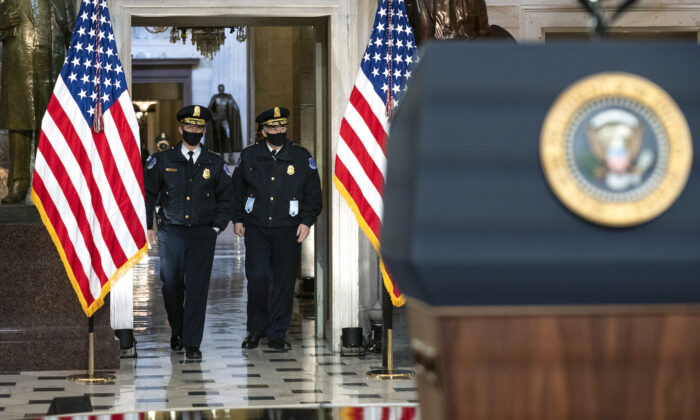 U.S. Capitol Police Chief Tom Manger and House Sergeant at Arms William Walker are working to identify and root out police officers who might pose “insider threats,” they told lawmakers on Tuesday.

During a hearing before members of the House Appropriations Committee, Walker said that his office has developed an “insider threat awareness program” to identify “insider threats and employees who do lose their compass.”

“The goal is to have police officers trained as insider threat specialists so we recognize the signs and symptoms and indicators that someone’s allegiance has changed,” Walker said during the House Appropriations subcommittee hearing.

He said his office will brief the full Capitol Police Board, which oversees the department, on the plan in the coming months.

Manger told lawmakers on Tuesday that he believes “it all begins with the hiring process.”

Background investigations, polygraphs, and social media investigations will be crucial to ensure those with extremist views aren’t hired, Manger said.

“After you hire someone, you do need to ensure that you have the kind of checks that are necessary to make sure that there’s not something that has changed in terms of their background,” he said during the hearing.

“Having really good in-depth investigations to determine if an officer is involved or engaged in some kind of activity that would lead to a question about their loyalty to our mission—that’s important as well to make sure that those investigations are done thoroughly and decisive actions taken on those cases,” Manger added.

Experts say the shock of the events that unfolded on Jan. 6 has prompted needed changes, including better communication among Capitol Police, other law enforcement agencies, and the public.

“It’s a sea change between this year and last year in terms of how the Capitol Police are thinking, and operating,” said Chuck Wexler, the head of the Police Executive Research Forum, an organization that focuses on professionalism in policing. “They’re going to be over-prepared, and willing to be criticized for being over-prepared.”

Manger so far has focused on making major changes to the agency, which includes 1,800 sworn police officers and nearly 400 civilian employees. He’s ordered new equipment for front-line officers and officers assigned to the civil disturbance unit while expanding training sessions with the National Guard and other agencies. He’s also pushed for stronger peer support and mental health services for officers.

The breach took place during a joint session of Congress when lawmakers met to certify electoral votes submitted by the states. The Capitol grounds and building were breached by protesters and some rioters, some of whom wanted to voice their stance against then-Vice President Mike Pence’s refusal to intervene in the certification process. Thousands of peaceful protesters remained outside.