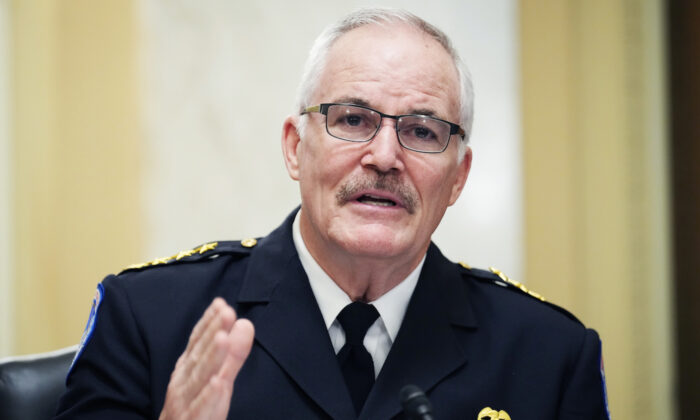 In a statement relayed through Twitter, USCP Chief Tom Manger said: “We are aware that demonstrators are planning to protest political issues at the Congressional Baseball Game for Charity. Our mission is to protect the Members of Congress during this family event, so we have a robust security plan in place.”

“We urge anyone who is thinking about causing trouble at the charity game to stay home,” Manger added. “We will not tolerate violence or any unlawful behavior during this family event.”

Now or Never, a climate activist organization, has threatened to shut down the game if Congress does not make progress on a climate spending package.

“If a climate spending bill has passed by then (or if passage is imminent), we will still take action to demand further legislation – this crisis won’t be solved by one bill, no matter how broad,” the group said in a blog post about the proposed demonstration. “However, we will ensure that our tactics fit the moment we are in. If Congress has passed climate legislation or is on the cusp of doing so, we may use a more conciliatory tactic.”

The threat comes as Democrats in the Senate have tussled with Sen. Joe Manchin (D-W.Va.) over reaching an agreement to fund new climate policies as part of a significantly scaled-down version of the Build Back Better (BBB) social spending package.

Earlier in the month, following an inflation report showing that consumer prices had increased by 9.1 percent over the past 12 months, Manchin appeared to dash his party’s hopes when he said he was skeptical about the timeliness of such a package.

“They all knew exactly where I stood when we saw 9.1 percent,” Manchin said in an interview. “That was an alarming figure to me, higher than anything in 40-plus years. I said, ‘Oh my goodness, let’s wait now. This is a whole new page.'”

However, Manchin changed his tune on July 27, when he said in a surprise late-night announcement that he had reached a deal with Senate Majority Leader Chuck Schumer (D-N.Y.) on a BBB package he would support.

That agreement, now dubbed the Inflation Reduction Act of 2022, seeks to balance new healthcare and climate spending with policies designed to combat inflation and pay down the national debt.

“I now propose and will vote for the Inflation Reduction Act of 2022,” Manchin said in a lengthy statement on the bill. “Rather than risking more inflation with trillions in new spending, this bill will cut the inflation taxes Americans are paying, lower the cost of health insurance and prescription drugs, and ensure our country invests in the energy security and climate change solutions we need to remain a global superpower through innovation rather than elimination.”

With Manchin’s support, only the support of Sen. Kyrsten Sinema (D-Ariz.)—who has long refrained from making comments to press about policy positions on ongoing debates—remains a question mark.

The bill, which will likely be opposed by all 50 Republicans in the evenly-divided upper chamber, will need the support of all 50 Democrats to pass. Because it uses the reconciliation process, no Republican support is needed and the bill cannot be filibustered.

However, it remains unclear whether the agreement will be a sufficient salve to protestors planning a demonstration at the July 28 baseball game.

This is not the first time that left-wing agitators have targeted the congressional baseball game: in 2017, a disgruntled supporter of
Rep. Bernie Sanders (I-Vt.) showed up to the game and shot Rep. Steve Scalise (R-La.) and five others in a planned attack.