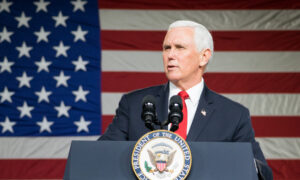 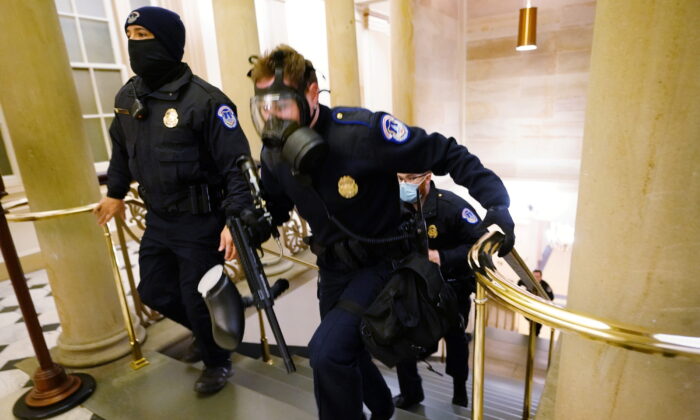 U.S. Capitol Police officers take positions as a subgroup of protesters enter the Capitol building during a joint session of Congress in Washington on Jan. 6, 2021. (Kevin Dietsch/Pool via Reuters)
US News

Legislators on Jan. 6 questioned how protesters were able to gain access to the U.S. Capitol, saying the actions by U.S. Capitol Police officers would be examined.

“I think it’s pretty clear that there’s going to be a number of people who are going to be without employment very, very soon, because this is an embarrassment,” Rep. Tim Ryan (D-Ohio), chairman of the House Appropriations Subcommittee on the Legislative Branch, told reporters during a virtual press conference.

The breach happened because of “enormous strategic and planning failures by the Capitol Police, by the sergeant at arms, and anybody else who was a part of coordinating this effort,” he said, adding that arrests should have been made when people started walking up the Capitol steps.

Ryan was asked about video footage that appeared to show Capitol Police opening barriers to let protesters stream through and eventually enter the Capitol. He said that would be part of the investigation into what happened.

Sen. Brian Schatz (D-Hawaii) called on a “total overhaul” of security for the Capitol.

“The physical breaching and desecration of our temple of democracy must never happen again. This was plainly a failure,” he wrote in a tweet.

Protesters stormed into the building on the afternoon of Jan. 6, about an hour after Congress convened to count electoral votes. Members of Congress were rushed out of the Senate and House chambers and quickly decried what was happening.

Police ultimately made dozens of arrests; four people were killed, including a woman who was shot while trying to enter the House chamber.

President Donald Trump, President-elect Joe Biden, and a number of other officials condemned the violence and called on people to exit the building. A bolstered force, including reinforcements from the Department of Homeland Security, eventually ejected everyone from the Capitol.

“I wouldn’t have bet a million dollars that would have been so easily done,” he said.

Before Jan. 6, police had increased the number of officers.

“We have been told there will be increased security on Jan. 6 for any potential demonstrations,” a spokesperson for House Administration Committee ranking member Rodney Davis (R-Ill.) told Roll Call in late December 2020.

Eva Malecki, a Capitol Police spokesperson, added that the department “has comprehensive security plans in place, and we continuously monitor and assess new and emerging threats, with the overall goal of keeping those within the Capitol Complex safe and secure.”

The Capitol Police didn’t respond to inquiries on Jan. 6 or 7. The Capitol Police is part of the Legislative Branch. It says on its website that it’s a federal law enforcement agency that safeguards the Congress, members of Congress, employees, visitors, and congressional buildings and grounds from crime, disruption, and terrorism.

The U.S. Capitol Historical Society, founded in 1921 to educate the public on the history and heritage of the Capitol, said in a statement that it was “shocked and heartbroken by today’s violent disregard for American values and our Constitution.”

“The U.S. Capitol is more than a building—it is the embodiment of American democracy and our way of life. We are a nation of laws, and the peaceful transfer of power is among the most fundamental hallmarks of our Constitutional republic,” it stated.

“Those who enable the malicious forces opposed to these principles betray the foundation upon which they stand. Our system has been tested before by those willing to suppress the will of the majority, but democracy is stronger than terror. Now is the time for every citizen to stand up and move to respect the will of the people as demonstrated in their vote.”

Some legislators didn’t take aim squarely at the police, but said the situation would be investigated.

Rep. Zoe Lofgren (D-Calif.), chairwoman of the Committee on House Administration, said in a statement that the breach “raises grave security concerns.” She said legislators would work to address the concerns and review the response to the protests in coming days.

“We must investigate the security breach at the Capitol today,” House Financial Services Chairwoman Maxine Waters (D-Calif.) said on Twitter. “I warned our Caucus and had an hour long conversation with the Chief of Police 4days ago. He assured me the terrorists would not be allowed on the plaza & Capitol secured.”