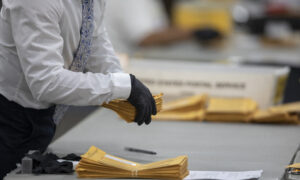 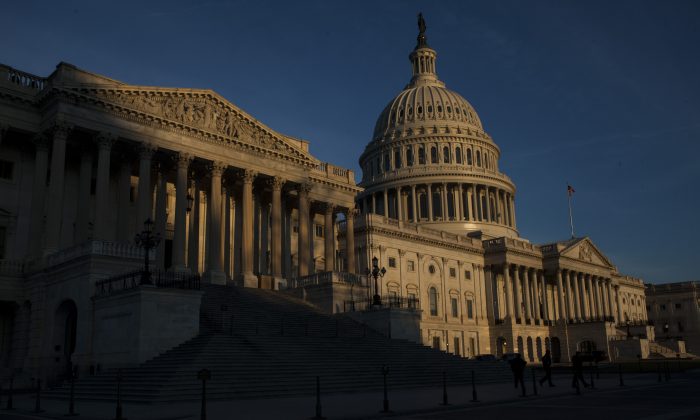 The United States Capitol Building on in Washington, D.C., on March 20, 2017. (Zach Gibson/Getty Images)
US

The Capitol Police turned over a trove of evidence in the alleged Imran Awan House cyberbreach and theft case to the defense attorneys when they were supposed to deliver it to prosecutors instead, according to court documents and a source.

And hours after The Daily Caller News Foundation asked prosecutors about the disclosure, Awan’s lawyer said he had learned of the forthcoming story from a source on Capitol Hill. TheDCNF had not told anyone other than prosecutors about it.

“The cop came to [Awan’s defense attorney] Chris Gowen’s office with a stack of papers … Then he came back and said, ‘I thought you guys were the other party.’ He was very, very angry. But Gowen made copies,” the source, who’s familiar with The Awans, told TheDCNF.

Awan, three relatives and a friend ran IT for one in five House Democrats and could read all their emails and files until they were banned on Feb. 2, 2017, for “numerous violations of House security policies.” The violations alleged by the House Office of Inspector General include logging into the House Democratic Caucus server thousands of times without authorization. This allegedly occurred during the same period in 2016 the DNC was hacked.

Prosecutor Michael Marando alluded to the disclosure of evidence in court on Oct. 6, 2017.

“Earlier this week, there was the inadvertent disclosure of law enforcement materials to defense counsel,” Marando told the judge. “There may be a motion on that.”

Another disclosure may have occurred after TheDCNF emailed the Office of the U.S. Attorney for the District of Columbia for comment on this story. Three hours after spokesman Bill Miller was contacted, Gowen emailed TheDCNF.

“I hear you are writing another article about me — I assume you don’t want to fact check it?” Gowen wrote. “From what I hear, you have it totally wrong as usual.”

TheDCNF had not told anyone other than the spokesman about an upcoming story involving Gowen. TheDCNF followed up with Miller to ask if prosecutors had provided that information to Gowen.

“I’m not going to get into what we do internally,” but “I really don’t know why that would be the case,” Miller told TheDCNF. “I communicate with the prosecutors regularly when I get media inquiries.”

Gowen — a former aide to failed Democratic presidential candidate Hillary Clinton — said he learned of the story through someone on Capitol Hill. “I have been told by my source on the Hill,” he said.

If true, this would imply congressional staff, or possibly even members, are feeding information to the attorney of a hacking suspect.

Awan exclusively worked for Democrats, including Rep. Debbie Wasserman Schultz, who formerly headed the DNC and whose brother is an assistant U.S. attorney in the D.C. office.

Republicans have told TheDCNF they’ve been led to believe they must stay out of the investigation. On Thursday, Speaker of the House Paul Ryan said, “I don’t want to get into the details of a police investigation.”

Democrats, meanwhile, have publicly underscored the importance of cybersecurity, expressing outrage at what they say is President Donald Trump’s involvement with the 2016 hack on the DNC.

Awan and his wife, Hina Alvi, have been charged with bank fraud for gathering $300,000 and wiring it to Pakistan. Prosecutors said “based on the suspicious timing of that transaction, Awan and Alvi likely knew they were under investigation at” the time they made that transfer.

It could be an offense punishable by jail time for Awan if he sought help from members. Any former senior congressional staffer, who “within 1 year after the termination of that employment,” communicates with his former office to “seek[] action by a Member, officer, or employee” can be jailed for a year. Awan and his brothers were among the highest-paid in Congress.

Gowen said the evidence inadvertently disclosed to his office was a copy of a laptop Awan’s former tenant, Laurel Everly, turned in to the Capitol Police in hopes of seeing whether Awan had hacked her. Everly previously complained of her landlord’s allegedly suspicious behavior and called him an “extortionist.”

“I was told there was nothing on it and was a giant waste of time, and the laptop was returned,” Gowen told TheDCNF.

Gowen didn’t say whether he returned all the material when TheDCNF asked.

Nonetheless, prosecutors said in court documents filed on May 3 that the “parties are currently exploring a possible resolution of” the criminal charges against Imran.

Everly previously told TheDCNF that she believed Awan was a national security threat and that she had a duty to assist in his prosecution by providing evidence, however small. But she also said she worried that Awan would somehow wind up with even more information about her.

Numerous fellow IT aides in the House who say they have knowledge of misconduct involving Awan — and in some cases, his relationship with members — have expressed to TheDCNF reluctance to come forward, citing similar fears. They said they perceive that prosecutors will not pursue the leads vigorously and that the Awans and Democrats will learn about their allegations and become angered.

“I’d do it if the right thing would happen,” one said. “But it’s going to be all risk, no reward … If they actually wanted to pursue this case, they would have approached me.”

The director of investigations for conservative watchdog group Judicial Watch, Chris Farrell, said the disclosures are “disgraceful and amateurish. What were the consequences for this misconduct? Who was disciplined or fired?”

Capitol Police’s role appears to be “to bury, constrain and minimize the Awan case” and points to the need for “a legitimate, full investigation by a competent law enforcement agency,” he continued.

The House’s Inspector General — an internationally renowned cybersecurity expert — found that the Awans made “unauthorized access” to House servers, were taking data off the House network and were covering their tracks.

But the investigation now is under the purview of prosecutors, the FBI and Capitol Police.

More than a year later, no one has been charged with anything in the IG reports.

“The only reason you’re not seeing charges is because the Democrats who employed him are not cooperating,” a senior Republican congressional official with direct knowledge of the probe told TheDCNF.

Farrell said “This matter is too serious to be left to political operatives.”

Prosecutors have said they have turned over “voluminous discovery” to Awan and his lawyers. A court filing shows that documents turned over include a copy of the hard drive of a government laptop with the username RepDWS — placing the contents of a government computer in Awan’s hands even though he was banned from the House computer network as a security risk.

It is unclear why prosecutors would give over evidence in the House matter because Awan and Alvi have not been charged with any wrongdoing in the cyber probe. Defendants are entitled to evidence to defend themselves against specific charges in court.

Capitol Police declined to execute search warrants on the Awans’ homes when the chief administrative officer notified the Committee on House Administration in December 2016 that the House Democratic Caucus server — at the time a key piece of evidence in the cybersecurity probe — had disappeared.

Police told Capitol Hill staff in June 2017 that they had no plans to conduct any more interviews – even though many of Awan’s colleagues in House IT told TheDCNF that they believed they had knowledge of wrongdoing but were never approached. Despite that, Administration Chairman Gregg Harper continued to defer to prosecutors, telling TheDCNF in April 2018 that “this is still in the hands of the Department of Justice.”

Republicans on Capitol Hill said, despite Democrats publicly saying they abhor cyberbreaches such as the DNC hack, prosecutors may be bowing to Democrats’ wishes to avoid a trial at which members of Congress would be forced to testify about their relationship with the Awans and the IG’s allegation many failed to take cybersecurity seriously in their own offices.

An attorney for Imran’s brother, Abid Awan, previously said there was a “shocking lack of IT and hardware security on Capitol Hill,” while another lawyer for Imran alleged that congressmen wanted the Awans to falsify financial documents.

Gowen said prosecutors have repeatedly asked Imran’s legal team to respond to TheDCNF’s reporting, according to a May 4 Fox News article.

“We are trying to be as helpful as possible to law enforcement to provide them any information or access they need,” Gowen told Fox.

After House officials flagged allegedly fraudulent financial records and unauthorized server access, law enforcement began monitoring the Awans in late 2016. During that period, the following occurred, all without triggering arrests or searches of their homes:

Awan wasn’t arrested until July 2017 and was charged only with the alleged bank fraud, which occurred six months prior.

Farrell said the repeated delays in the case indicate that prosecutors may be looking to make it go away as quietly as possible — even if it means accepting a plea deal to far more minor or even unrelated crimes —  in order to keep the case out of public court where Democratic congressmen might have to testify.

Kendra Arnold, a lawyer with the Foundation for Accountability & Civic Trust, said: “If he was Joe Smith from Idaho this is not how the prosecution would be proceeding.”