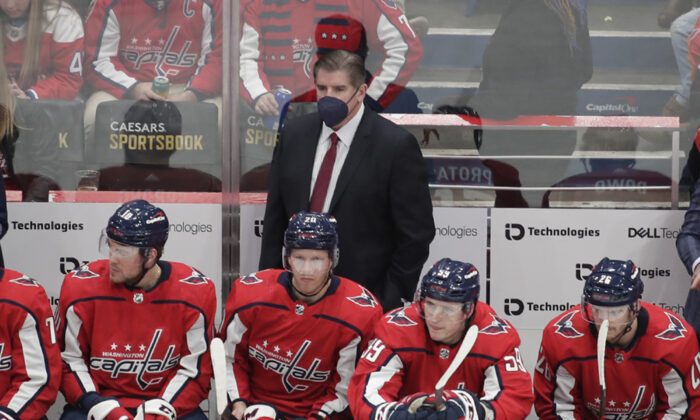 The Washington Capitals-Philadelphia Flyers game scheduled for Tuesday night has been postponed, the 50th NHL game delayed this season for coronavirus-related reasons.

The league said COVID-19 issues with the Capitals prompted the postponement. Defenseman Justin Schultz and forward Daniel Sprong began the team’s morning skate in Philadelphia but were pulled off after their test results came back.

Wiping out Capitals-Flyers left the Tampa Bay Lightning at the Vegas Golden Knights as the only game left in the NHL this week. The league and players’ association agreed to begin the annual holiday break early and push off the games that were scheduled for Thursday.

“It’s not fun to see all these games getting canceled,” Lightning defenseman Victor Hedman said. “It’ll be interesting to see the make-up dates and when they’re going to fit those games in, but for us to focus on that, we can’t do that.”

Of the 50 games postponed, 45 have occurred over the past two weeks with the Delta and Omicron variants spreading across North America. More than 15 percent of the league’s 700-plus players are in virus protocol, a list that continues to grow.

“Hopefully the guys that are affected have no symptoms and they get back as soon as possible to play hockey again,” Hedman said

The Lightning will be without coach Jon Cooper against the Golden Knights after he was placed in COVID-19 protocol earlier in the day. Assistant coach Derek Lalonde was to take his place running the bench.

General manager Kevyn Adams said Girgensons is experiencing symptoms while Skinner and Vinnie Hinostroza are not. Hinostroza landed in the protocol a day earlier.

“I think what you are seeing is that this is all over the world,” Adams said on a video call. “The protocols are in place. You are doing your best to follow everything. But you get up every day and see what the day brings. We have talked all year to our players about being vigilant with the rules and really making sure that we are doing everything we can to keep ourselves and each other safe.”

The positive tests led to the Sabres canceling practice on Tuesday. The team has been off since a 3–2 overtime loss at Pittsburgh on Friday and had its two games against Columbus and one against Colorado postponed this week after both teams’ schedules were paused because of virus problems.

The San Jose Sharks also canceled practice Tuesday out of what the team called “an abundance of caution.”

The league is approaching the end of the holiday break with caution, allowing only players, coaches, and staff who text negative to enter team facilities Sunday. The season is scheduled to resume Monday.