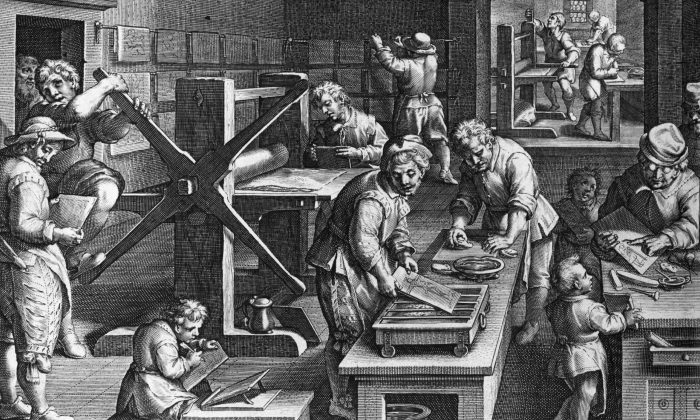 The art of engraving and printing from the prepared plates using a large press, at a print works, circa 1600. Original Artwork: Engraving by J Stradenus (1523 - 1605). (Hulton Archive/Getty Images)
International

Capitalism—how can a single word spark so much praise and vitriol simultaneously? How can a word prolifically used to describe most societies around the world provoke starkly different interpretations? We have to dive into history to answer those questions, but history is so brimming with contemporary parallels, it hardly feels like the past at all.

What’s more, truly untangling the meaning of capitalism requires mapping a way to a common ground for massive groups of people locked in a maze of heart-burning conflict.

Let’s do our best.

To explain capitalism, we first need to track the term “capital.” It dates back to the Middle Ages, perhaps as far back as A.D. 1100, and referred to the principal of a loan. Later, it came to be used to describe a person’s wealth or property and, since the 17th century, wealth used to conduct business.

As for capitalism, the Digitized Treasury of the French Language dates the term “capitalisme” to 1754, and it is described as meaning simply the “state of one who is rich.”

The same source dates the French word “capitaliste” to 1759, and it is described as meaning “a person who possesses a capital, a rich person.”

The term changed its meaning, however, at the end of the 18th century during the French Revolution and with the birth of communism.

Since then, capitalism has become a political label used by socialists, communists, and collectivists.

In its likely first use in such a context, French socialist politician Louis Blanc described it in 1850 as an “appropriation of capital by some to the exclusion of others.”

Those who used the term considered such a situation unjust and doomed to failure.

But capitalism didn’t fail. With the coming of the 20th century, the living standard gradually improved not only for the rich, but for virtually everybody, to the point where the majority in Western societies would have been considered rich by 19th-century standards.

Even globally, since 1970, the fraction of the world’s population that survives on $1 or less a day (adjusted for inflation) has shrunk by 80 percent, as pointed out by Arthur Brooks, president of the American Enterprise Institute—a change he attributes to the spread of the American free enterprise system around the world.

On the other hand, socialist, communist, and collectivist regimes, which have tried to uproot capitalism, failed both culturally and economically, killing over 100 million in the process.

Capitalism was ultimately widely embraced as a positive phenomenon—letting people try to get rich on their own despite vastly different starting points led to increased prosperity in general.

But was it really this kind of society that produced the prosperity of the 20th century?

The Role of Morality

Looking back, economists identified two main precursors for capitalism: protection of property rights and enforcement of contracts. “Keep your stuff, keep your word,” as contemporary philosopher and commentator Stefan Molyneux put it.

But who can provide such protections? Capitalists can only rely on state power at their own peril because “a government strong enough to protect property rights and enforce contracts is also strong enough to confiscate the wealth of its citizens,” wrote Stanford political science professor and economist Barry Weingast.

Private organizations, like guilds and trade groups, can potentially be relied upon to enforce contracts, but they only wield influence over their members.

Thus, on closer examination, the success or even survival of capitalism was fundamentally dependent on the general level of morality in the society.

Many so-called capitalists didn’t identify themselves as the bloodthirsty capitalists portrayed by Marx and others. They primarily identified themselves as human beings and, as such, imposed on themselves some moral restraints, even if it meant losing some capital.

Most people don’t primarily identify our societies as capitalistic in the meaning that they are solely driven by profit. They help the less able, the old, and the sick, even if doing so means losing some capital.

Finally, there was an element of morality within modern capitalism that for a long time went unnoticed or even bore ridicule.

Modern capitalism required business and work ethics, as described in 1905 by German sociologist Max Weber in his study “The Protestant Ethic and the Spirit of Capitalism.”

The concept may sound trivial today. After all, some current supporters of capitalism argue that capitalism itself regulates business and work ethics, since both workers and business owners realize that profit requires some level of virtue.

But that self-regulation wouldn’t have been sufficient to achieve modern levels of prosperity, according to Weber.

There were plenty of capitalist opportunities throughout history, he pointed out. But the pursuit of profit had always been seen as a sign of avarice—a merely tolerated, necessary evil. While many unscrupulously pursued profit anyway, such endeavors never led to a dramatic increase in prosperity, as brought about by modern capitalism. And for good reason.

“Capitalism cannot make use of the labour of those who practise the doctrine of undisciplined liberum arbitrium, any more than it can make use of the business man who seems absolutely unscrupulous in his dealings with others, as we can learn from [Benjamin] Franklin,” Weber noted.

Franklin’s writings are indeed replete with examples of virtue like diligence, thriftiness, honesty, and integrity leading to profit.

But Weber argued such values wouldn’t have been strong enough to ensure capitalism’s success if it weren’t for people like Franklin imparting them.

Notably, European and American Protestants developed a culture of running and growing an honest business as a worthwhile goal in and of itself, Weber argued, though others have convincingly criticized him for tying such a mentality to Protestants alone.

Thus, the dog-eat-dog capitalist society imagined by communists turned out to be a myth. People weren’t as cruel as to rip society apart for profit, as the socialists and communists predicted.

Protection of property rights and enforcement of contracts—the guarantees of economic freedom that allow one to pursue profit in a free market and that many today consider a synonym of capitalism—are but one condition of a prosperous society and can only succeed as far as the level of morality supports them.