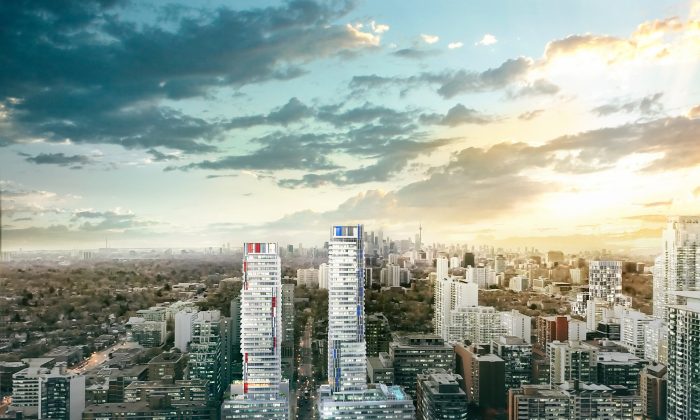 Rendering of 150 and 155 Redpath condominiums located in mid-town Toronto's Yonge and Eglinton neighbourhood. Developed by Freed Developments and Capital Developments, the buildings are scheduled for completion in 2017 and 2018 respectively. (Courtesy of Capital Developments)
Canadian Content

In this Year of the Monkey, the smart money is on the Yonge-Eglinton neighbourhood, according to Matt Young, vice president of development for Capital Developments.

“There’s nothing more impactful to real estate values than public transit,” Young told the Epoch Times, and with the Eglinton Crosstown LRT coming to that community and the influx of new retailers, savvy buyers are realizing the value of buying condos there now.

Young says that while 2015 was “a huge year for us,” with Capital Developments (formerly CD Capital) ranking as one of the largest developers in the Greater Toronto Area, he’s also bullish on 2016. The company doesn’t plan to launch any new projects this year but will be progressing with its 150 and 155 Redpath condominiums and the Art Shoppe Lofts + Condos, all in the Yonge-Eglinton neighbourhood. All three projects are in partnership with Freed Developments.

A 24-hour diner will be included at 150 Redpath, recognizing the round-the-clock lifestyle and helping to enhance Yonge and Eglinton as a destination. At 155 Redpath, “great cafes” will add to the street life, says Young.

“Five or six years from now, this neighbourhood is going to be very exciting,” he predicts.

Art Shoppe Lofts + Condos will be a signature project for Capital Developments and its managing partners Jordan Dermer and Todd Cowan, and for their development partner, Peter Freed of Freed Developments. The project will be built on the former site of the Art Shoppe, a venerable furniture store that has moved to a new location.

For the project, the developers brought in a fashion icon, German-born designer Karl Lagerfeld. While he’s best known as creative director of international fashion brands Chanel and Fendi as well as his own label, Lagerfeld has worked on interior design projects around the world, and is also a photographer, illustrator, and film director.

“We needed something special, so we forged a relationship with Karl Lagerfeld,” says Young. “He’d never designed a condo before, and had never been to Canada before either. He’s designing two different lobbies. He’s a forward-thinking guy and came up with some really cool ideas.”

The Lagerfeld-designed lobbies will be unveiled this year. “It will be like living in a piece of history he created,” says Young.

Award-winning interior design firm Cecconi Simone Inc. has handled the rest of the interior design and the building is designed by Peter Clewes ofarchitectsAlliance, who also designed 150 and 155 Redpath.

A 28-storey tower on the north side will step down to a loft-style 12-storey podium on the south side to respect the traditional scale of the buildings southward on Yonge. Two floors of retail space at the base will animate the street life on this section of Yonge with shops, services, restaurants and cafes that will bring more pedestrian traffic and serve as a catalyst for further development.

The Art Shoppe fits with Capital’s philosophy that Triple A locations will do well with buyers—the fact that 90 percent of the project has sold confirms this.

“We love Yonge and Eglinton. We love downtown as well, and there are a lot of nodes emerging that we plan to be where that we can take a longer view,” says Young.

He is optimistic about the continuing strength of the Toronto condo market and says even if prices plateau, they will rise again, as there is talk about expanding the province’s Greenbelt, which will force more people to live in urban areas and in smaller spaces. As well, single family home prices are unattainable for most buyers, who are turning to condos instead. And many people don’t want to deal with the hassle of long commutes.

“People will have to change their lifestyles and live in the city,” says Young. “That’s the story easily for the next five years. The big picture is that people will still buy condos.”

The good news for condo buyers is the vibrant lifestyle Toronto offers and it was recently rated as Best City in the World to Live by the Economist. Events such as the Pan Am Games in 2015 and this year’s NBA All Star Games are putting a global spotlight on Toronto.