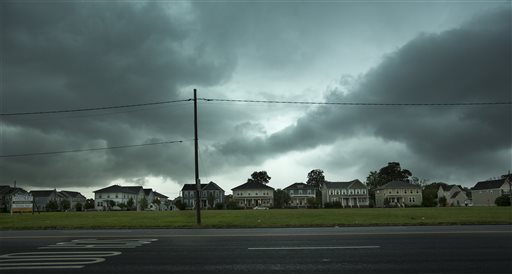 At least two people are dead in Cape Charles, VA after a tornado hit the town on Thursday.

The Virginia State Police say that there are also about 20 injuries from the storm.

“We are in Cape Charles across from the campground. It was a huge storm with high winds and golf ball hail. Did not see the tornado but there is a lot of damage around. We had very little warning that any storm, much less one that big, was coming.”

A Northampton Sheriff’s Deputy directs traffic in the middle of an intersection of U.S. Route 13 in Cheriton, Va. after a severe storm passed through the area. (AP Photo/Eastern Shore News, Jay Diem)

A tractor trailer truck lies on its side in the median of U.S. Route 13 in Cheriton, Va. while a fire engine responds to a nearby campground after a severe storm passed through the area, Thursday, July 24, 2014. (AP Photo/Eastern Shore News, Jay Diem)

A number of photos show the destruction caused by the twister.

Eder said she left the campground before the full force of the storm hit.

Eder’s father, Fire Chief David Eder, told her from the scene that the storm felled trees and flipped at least two campers.

Geller said people at the campground were being taken by bus to a nearby school for shelter.

Brian Coy, a spokesman for Gov. Terry McAuliffe, said the administration was closely monitoring the situation and had received reports of severe damage at the campground with trees on top of campers.

Coast Guard spokesman Petty Officer 3rd Class David Weydert said crews also were responding to reports of boats overturned in the water in the area. Good Samaritans pulled at least three people from the water, he said, though their conditions were unknown.

A reporter at the scene said the road to the campground was blocked by police.

[View the story “cv” on Storify]