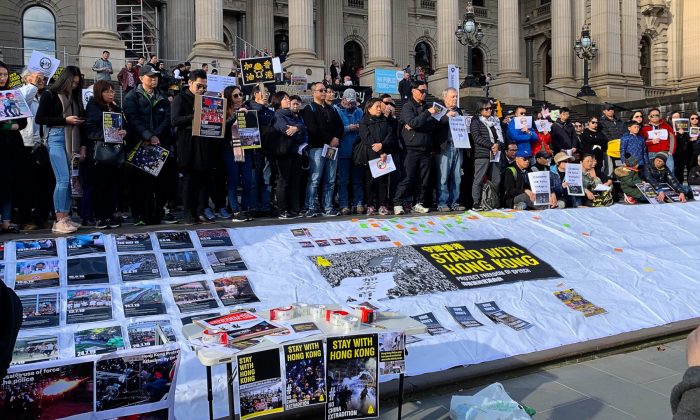 Hong Kong Rally on the steps of Victoria Parliament in Melbourne, Australia on 28 July 2019. (The Epoch Times)
Australia

The latest figures published by the Australian Bureau of Statistics (ABS) reveal that Australia’s Cantonese-speaking population increased by more than 14,000 in the space of five years, making Cantonese the fourth most spoken language in the country.

The number of Cantonese speakers increased by 14,338—compared to the 2016 census—to 295,281. Mandarin remains the second most spoken language in Australia.

The ABS conducts the Census of Population and Housing every five years and the latest census data is from Aug. 10, 2021. Figures show that the country’s total population, excluding short-term overseas visitors, was 25,422,788. This means that the total population of Australia has doubled in the last 50 years.

Since a draconian Hong Kong national security law was passed in June 2020, the number of Cantonese-speaking Hong Kong immigrants to Australia has risen. According to the Australian Government’s Department of Home Affairs’ 2020-21 Migration Program Report, the government granted 4,312 permanent resident or temporary pre-resident visas to Hong Kong citizens under the general immigration program (excluding humanitarian visas) between July 1, 2020, and June 30, 2021, nearly 2.7 percent of the 160,000 visas issued by the Australian government during this time frame.

For the first time in six years, Hong Kong is in the top 10 immigrant visas granted countries, being placed 8th from 23rd place last year.

The number of immigrant visas granted to Hongkongers this year increased by 210 percent in comparison to 1,391 in the previous year and by about 162 percent higher from 1,647 in the year prior to the coronavirus outbreak.

According to SBS, in 2020-2021 the number of Hong Kong citizens granted permanent residence visas for Australia is at a 25 years high and exceeds the migration wave that occurred in 1997 following the transfer of sovereignty over Hong Kong to China.

Immigration data shows the number of immigrant visas granted to Hong Kong citizens in 1996/97 and 1997/98 was 3,591 and 3,491 respectively, and about 80 percent were obtained through skilled worker visas for permanent residence.