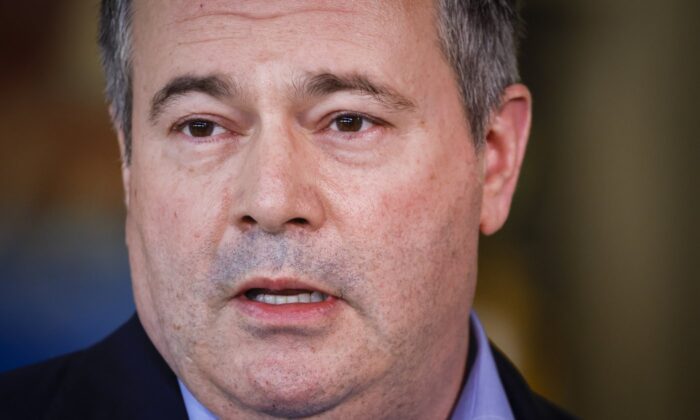 Alberta Premier Jason Kenney says he “can’t wait” for the results of his leadership vote, which he is confident he’ll win, and urges all sides in the intraparty feud in the meantime to stop their public sniping.

Kenney also reiterated that if he wins the May 18 review and stays on as leader, a sharp reckoning is coming to dissident caucus members who fail to fall in line and support him and his United Conservative party.

“I can’t wait for us to finally get this behind us on May 18 with the leadership review vote,” Kenney said Saturday on his provincewide radio call-in show.

“I would ask everybody regardless of their views about the future of the party to try to keep it inside, stay focused, and let the members decide and then we’ll move on one way or another.”

Kenney said he’s hearing from members that they want the UCP to “get our act together.”

Kenney needs at least a 50 percent plus one majority to stay on as leader in the vote or a leadership race must be called.

Almost 60,000 party members are getting ballots that must be mailed back by May 11, with the results announced May 18.

Kenney said this week he has likely been too tolerant of public dissent from caucus members and suggested once again that if he wins there will be a reckoning.

“And I’ll read it as an endorsement of unity, discipline (and) of moving forward to the future focused on Albertans’ key priorities, not internal party politics.

“I will expect all of our caucus colleagues to respect the democratic decision of the members.

“Our caucus has demonstrated in the past that there is a limit to our willingness to accept constant attacks on the government and on the team and on confidentiality.

“You cannot operate as a government without at least a basic level of professionalism, discipline and unity.”

Kenney has been facing pushback from some caucus members for a more than year.

They have criticized him for decisions on COVID-19 and for running what they term a tone-deaf, top-down administration with short shrift given to grassroots input. Kenney’s position hasn’t been helped by sluggish popularity and fundraising numbers.

That criticism has for the most part been somewhat muted, limited to public postings on Facebook and attacks that failed to name Kenney specifically.

Exceptions include backbencher Todd Loewen, who called for Kenney to quit a year ago and was immediately voted out of caucus. Kenney critic Drew Barnes was also kicked out at the same time.

In recent weeks, as Kenney’s leadership review saw the rules changed at the last minute from an in-person to a mail-in vote, criticism has become more vocal and pointed.

Backbenchers Peter Guthrie and Jason Stephan have called for Kenney to quit. Guthrie has dismissed Kenney’s pickup-driving, Everyman persona as a cruel trick played on voters.

Stephan told the house this week, without naming Kenney, that unity is not about marching behind the leader over a cliff.

Leela Aheer, fired last year from cabinet after criticizing Kenney, says the UCP name has been stained by corruption.

Deputy speaker Angela Pitt has characterized the government as a closed circle of decision makers contemptuous of dissenting voices.

Backbencher Richard Gotfried has said the government has stopped listening and is not focusing on what’s best for Albertans.

Brian Jean, who recently won a byelection for the UCP on a promise to try to oust Kenney, said it speaks volumes that Kenney casts himself as the best hope for unity while his issues manager simultaneously attacks elected members of Kenney’s caucus.

Jean was referring to Kenney’s issues manager Bryan Rogers, who mocked Kenney’s backbench critics as clowns on Twitter Friday while employing an image of the grease-painted circus performers from “The Simpsons” TV show.

Kenney himself – in a leaked audio recording — has called his critics “lunatics” and “kooky people” and compared them to insects drawn to the bright light of his party’s success.