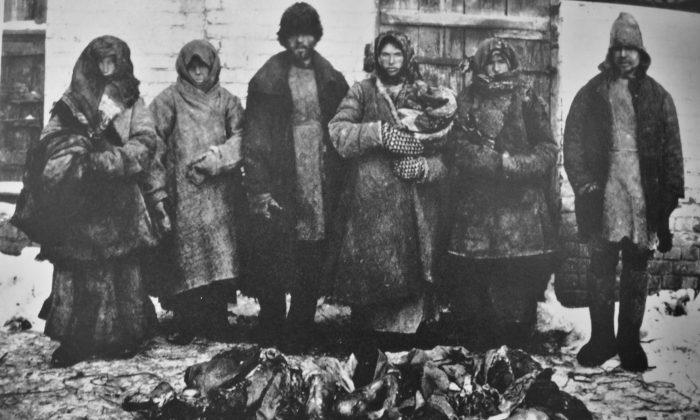 Peasants stand in front of human remains. Cannibalism was widespread during the Russian famine between 1921 and 1922. (Creative Commons/Wikimedia)
The Dead End of Communism

Cannibalism: The ‘Pinnacle’ of Communist Rule

As a result, there have been multiple outbreaks of cannibalism in the communist Soviet Union, China, Cambodia, Ethiopia, and North Korea.

Starting with China, under former communist leader Mao Zedong’s “Great Leap Forward,” a disastrous policy to develop China’s steel production to American or British levels in only a few years resulted in as many as 45 million people dying of starvation or persecution.

Jasper Becker, who wrote Great Leap account “Hungry Ghosts,” says that Chinese people were forced to engage—out of pure desperation—in selling human flesh on the market, and the swapping of children so they wouldn’t eat their own. The Great Leap Forward, which spanned four years between 1958 and 1962, was caused directly by Mao himself, according to a number of historians and researchers, including famed Dutch historian and author Frank Dikotter. Mao had attempted to replicate Soviet leader Joseph Stalin’s five-year plans.

”China was at peace,” Becker wrote. ”No blight destroyed the harvest. There were no unusual floods or droughts. The granaries were full and other countries were ready to ship in grain. And the evidence shows that Mao and the Chinese bureaucracy were in full control of the machinery of government.”

In Fengyang, for example, all the inhabitants of 21 villages died during the Great Leap. Sixty-three cases of cannibalism were recorded, Becker says.

According to “Hungry Ghosts,” a government regulation in Fengyang likely posted to prevent people from digging up corpses for a last-ditch food source read thus:

“Shallow burials are prohibited. All corpses must be buried at least three feet deep and crops must be grown on top.
No burials are allowed near roads.
All crying and wailing is forbidden.
The wearing of mourning clothes if [sic] forbidden.”

Becker notes the cannibalism in China in the late ’50s and early ’60s likely occurred “on a scale unprecedented in the history of the 20th century.”

A disturbing account from a witness was recounted by Yang Jisheng, who authored “Tombstone,” a comprehensive account of the Great Chinese Famine. “I went to one village and saw 100 corpses, then another village and another 100 corpses. No one paid attention to them. People said that dogs were eating the bodies. Not true, I said. The dogs had long ago been eaten by the people,” the person said.

There are two well-known incidents of mass cannibalism in the Soviet Union: Once during the early 1920s under then-leader Vladimir Lenin during the Povolzhye famine, which reportedly left millions dead.

The Red Cross, at the time, reported that peasants were “digging up bodies in order to eat them.”

Later, under Stalin, the phenomenon of cannibalism repeated itself. During the Holodomor, known alternatively as the “Terror Famine,” an estimated 7 million to 10 million Ukrainians died, with some historians claiming that it was Stalin and the Soviet leadership itself who planned the famine to eliminate a Ukrainian independence movement.

Even the Soviets admitted it.

About 2,500 people were convicted of cannibalism during the Holodomor, records show.

If cannibalism in Mao’s China or Stalin’s Soviet Union seem plucked from antiquity, North Korea is a more contemporary example. A great famine ravaged communist North Korea in the mid-1990s, killing as much as 10 percent of the isolated country’s population. Its starving denizens were forced to scavenge the countryside for food.

“Don’t buy any meat if you don’t know where it comes from,” one Chongjin woman told to a friend, later telling reporter Barbara Demick, who recorded it in her 2009 book “Nothing to Envy: Ordinary Lives in North Korea.” The woman noted that horrifying rumors of cannibalism spread through the countryside, and people avoided eating meat and warned their children.

A North Korean military officer who defected to China—Chinese authorities currently have a policy of sending back defectors to North Korea, despite the real possibility of torture or execution—said that cannibalism usually followed the frequent mass famines in North Korea.

“People are going insane with hunger. They even kill and eat their own infants. This kind of thing is happening in many places,” he said, according to Becker, as reported by the Washington Post.

Between 1994 and 1998, between 250,000 and 3.5 million people may have died in the North Korean famine. It was triggered after North Korea’s economy essentially failed when the Soviet Union collapsed in 1991, thereby eliminating subsidized trade between the two nations.

Later, in early 2012, thousands of people starved to death following then-leader Kim Jong Il’s death. In 2013, Asia Press reported there were “fears” of cannibalism in North and South Hwanghae amid a famine that left 10,000 dead. In a disturbing account, a man was believed to have exhumed his grandchild’s corpse to eat. Grim rumors circulated, claiming men boiled their children.

In 2003, aid agencies working in North Korea reported that children were found cut up and cooked by people who were desperate for food. At the time, the United Nations World Food Programme attempted to gain access to “farmer’s markets” in the country—but Pyongyang turned them away, the Telegraph reported.

“Pieces of ‘special’ meat are displayed on straw mats for sale. People know where they came from, but they don’t talk about it,” a refugee was quoted as saying at the time.

Four years, 2 million deaths. It was about 25 percent of the then-population of 8 million in Cambodia. During Pol Pot’s Mao-inspired Khmer Rouge regime lasting from 1975 until 1979, torture, malnutrition, executions, disease, and forced labor were widespread. Pol Pot wanted to execute the purest form of communism yet conceived in the world, forcing city residents to work in the fields.

“Everybody in the prison saw it, and it looked so scary to see fresh human liver and heart. There was a story spread that Khmer Rouge cadre…ate humans’ inside organs because it made them heartless and gave them the courage to kill others,” political prisoner Ouk Him said in 2015.

“While I was tending cows and buffaloes, I could see how prisoners were killed. Most of them had their throats slit,” said Meas Sokha during the tribunal. “Two (Khmer Rouge guards) would hold a prisoner tight and another would slit the throat of the prisoner.”

He added, “Whenever there were killings, the guards would drink wine together with gall bladders. I knew these gall bladders were from humans. There were many gall bladders dried in the sun near the fence.”

Him later described the murder and subsequent cannibalism of a pregnant woman at the hands of Khmer Rouge guards.