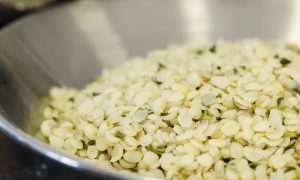 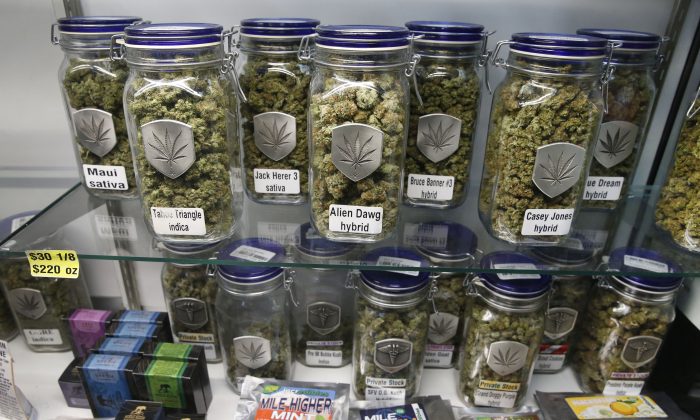 Marijuana and cannabis-infused products are displayed for sale at Medicine Man marijuana dispensary, which is to open as a recreational retail outlet in Denver, Colorado, in 2014. (AP Photo/Brennan Linsley)
US News

Emergency-room visits related to cannabis use in Colorado—the first U.S. state to completely legalize its use—have tripled at one of the state’s largest hospitals over the past few years, according to a study published on March 25.

The study published in the Annals of Internal Medicine examined 9,973 emergency department visits attributed to both inhaled and edible cannabis between 2012 and 2016 at the University of Colorado hospital in Aurora.

Colorado in 2014 became the first state to legalize recreational cannabis. Since then, nine other states, including California, Maine, Massachusetts, and Michigan, have followed suit.

“Whenever there’s a new drug in a community, that means there will be more emergency department visits associated with it,” lead researcher Dr. Andrew Monte told AFP.

Researchers found that while just 0.32 percent of cannabis sales stemmed from edible cannabis products, such as candy or cookies containing THC, ingesting cannabis made up 10.7 percent of emergency room visits.

Dr. Andrew A. Monte, MD, PhD and his team found that though just 0.3 percent of total cannabis sales in Colorado in terms of weight were edibles, edible-related emergency visits accounted for 10.7 percent of total visits at UCHealth. https://t.co/peF6o4P5S2

Monte, a medical toxicologist and emergency medicine physician at the Colorado hospital, warned against the risks of edible cannabis for recreational use as cannabis laws continue to change.

“States moving to liberalize cannabis policy should consider keeping edibles out of the recreational marketplace,” he told CNN.

“There have been several high-profile deaths due to cannabis edibles but no documented death attributable to inhaled cannabis.”

Recreational marijuana has been legal in Colorado for years. What can Illinois learn before its residents start firing up? https://t.co/yO8alNlr9M pic.twitter.com/tS3iCPBm2c

In 2015, a man in Colorado died by suicide after ingesting a product containing cannabis, according to the study.

Monte added that said it takes far longer to feel the effects from edibles compared to inhaling cannabis, and their adverse effects can be far more intense, the Guardian reported.

“It was a striking thing. It wasn’t like these people were taking 100mg or 500mg of cannabis edibles. These were relatively lower doses,” he told the Guardian.

As more states consider legalizing recreational marijuana, many users are consuming edibles instead of smoking the leaf. But the research on the effects of edibles is scarce.@ljgliha of @rmpbs reports. pic.twitter.com/pRUUgHAXOX

“If you smoke and you have a brief amount of hallucination, but then it goes away pretty quickly, you may not come to the emergency department.

“But if you develop psychosis and it’s lasting for hours, you might come to the emergency department,” Monte said.

THC, also known as delta-9-tetrahydrocannabinol, is the psychoactive compound responsible for many of the psychological effects of marijuana.

In an editorial published alongside the research, Drs. Nora D. Volkow and Ruben Baler of the National Institute on Drug Abuse said edibles can be far more harmful than inhaling cannabis if people ingest too much after not feeling the effects instantly.

Reports of vomiting episodes caused by so-called cannabinoid hyperemesis syndrome have been on the rise since the states of Colorado and California relaxed their marijuana laws, according to emergency physicians.

Speaking with NPR, doctors in the states said that those who smoke cannabis several times a day tend to be more at risk.

“Five years ago, this wasn’t something that [doctors] had on their radar,” Dr. Kennon Heard of the University of Colorado in Aurora told NPR.

“The prevalence of cyclic vomiting presentations nearly doubled after the liberalization of medical marijuana,” a 2015 study co-authored by Heard found.

In December 2018, Trump moved to legalize industrial hemp production and marketing as long as the cannabis plant contains less than 0.3 percent THC.

A2: Though medical marijuana has gained lots of acceptance recently, the FDA has not approved the marijuana plant as a medicine. So far, scientific studies of cannabinoids, the chemicals in marijuana, have led to two FDA-approved medicines. #NDAFW https://t.co/5XJ3DS9sDr https://t.co/e06FSVv5nE