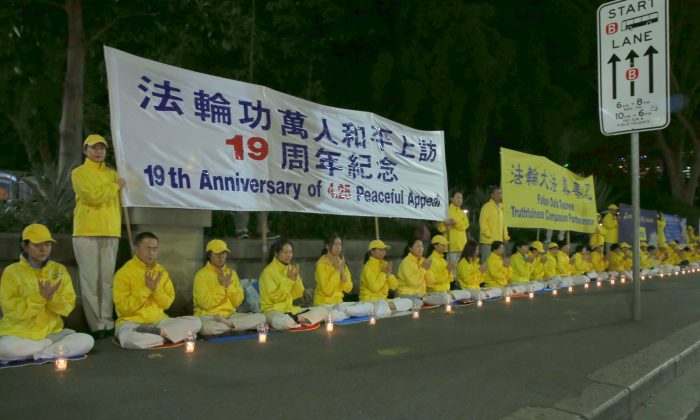 Falun Gong practitioners in Sydney, Australia, gather in a candlelight vigil to continue their journey of peaceful appeal for freedom of belief in China. (Linda Zhang/The Epoch Times)
Australia

More than 300 Falun Gong practitioners sat quietly outside Hyde Park alongside Elizabeth Street Tuesday evening in flickering candlelight. The meditators were holding candles in a solemn vigil to mark the 19th commemoration of what is known as the largest peaceful appeal in modern Chinese history.

A prominently displayed banner at the entrance of Hyde Park read: “April 25, 1999: Over 10,000 Falun Gong meditators gathered quietly in Beijing. They had come to the central appeals office to ask the government to stop escalating its harassment of fellow meditators, and to uphold their right to freedom of belief.

“What followed was a nationwide persecution leading to the imprisonment, torture and death of potentially hundreds of thousands. This genocide still continues today.”

Some onlookers stopped to learn more, while others accepted informational leaflets and lent their support by signing a petition addressed to Parliament. Those who are tech-savvy also helped to spread the message of the commemoration by taking photos of themselves at the vigil and posting their photos on social media.

Andrew, a public servant said he was aware of the persecution of Falun Gong in China. “I think it’s very bad,” he said. “I, myself, am not interested in meditation, but I think people should not be persecuted because they practice meditation. I think it’s terrible what the Chinese government’s doing, and our government should be telling the Chinese government to stop persecuting and stop harvesting the organs of those people.”

Andrew said he became aware of reports of forced organ harvesting from prisoners of conscience in China when he signed a petition in Martin Place last year.

“The Chinese government is behaving in a terrible, terrible way,” he added.

Cassia, a biologist by profession, noticed the candlelight vigil on her way home and took a photo to raise awareness on social media. “I have not heard about the persecution before, this is the first time for me to know it,” she said.

Jessica, a musician, said she was moved by the music that was playing at the vigil and had stopped to reading the information. She said had heard of the meditation discipline Falun Gong but had no idea it is being persecuted in communist China.

“I am so sad that this would be happening in today’s age,” she said before taking a photo to share on her social media, as her way to help get the word out. “It is absolutely heartbreaking … awful! I’m so sorry to hear this.”

Karen, a yoga teacher who was passing by Hyde Park, said it is a joke that such innocent meditators, much like herself, could be treated as criminals. “Everybody knows that meditation is peaceful,” she said. “The reality of the persecution is a nightmare!”

Karen suggests that not only Australians but the whole world should stand up in solidarity against the persecution.

Amy from the United Kingdom signed a petition and asserted that live organ harvesting must stop. She mentioned that her grandfather went to the controversial ‘Real Bodies’ exhibition at Moore Park, which is blacklisted in France and Israel, and had a horrible feeling. He felt there must be a terrible story behind how the bodies, many of them from young people, came to be there.

A French lady, Jessica, said: “I think everyone should be allowed to do the things they wish to do.” Referring to the persecution of Falun Gong, she said, “That is very sad.”

Much like how Hong Kong’s Victoria Park will be illuminated with candlelight this coming June 4 — in the 29th commemoration of the Tiananmen Square Massacre when more than 10,000 democracy-seeking Chinese were killed by the Chinese Communist Party ― Falun Gong practitioners continue their annual nonviolent appeal to the CCP for their right, and the right of all Chinese people, to the freedom of belief. They also commemorate their fellow practitioners who have been killed by the CCP’s brutal persecution campaign of close to 19 years, and which still continues today.