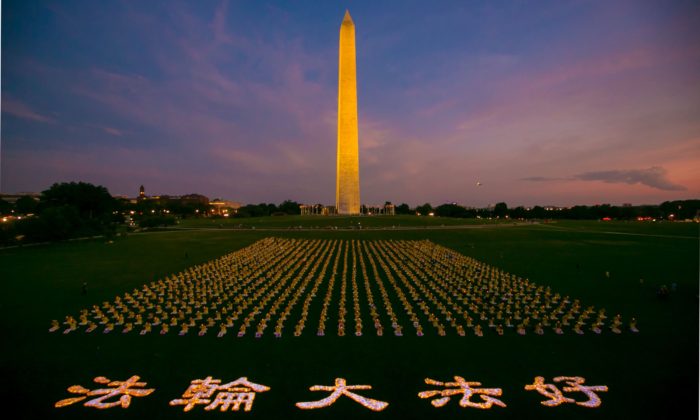 WASHINGTON—The air was fresh after a sweltering July day in the nation’s boggy capital. An evening storm had cut up the sticky heat, paving the way for brilliantly colored clouds as the sun set over the Washington Monument.

Serene Chinese instrumentals rippled through the air, as more than 1,000 candle flames dotted the lawn in front of the towering obelisk that pierced the darkening sky.

The scene ushered in a somber mood. Each candle held by a seated Falun Gong practitioner was lit in memory of an untold number of those killed by the Chinese communist regime for nothing other than practicing their faith.

The previous day, July 20, marked 23 years since the Chinese Communist Party (CCP) launched its nationwide persecution of Falun Gong, a spiritual practice involving meditative exercises and a set of moral teachings based on the tenets of truthfulness, compassion, and tolerance.

The practice’s immense popularity, drawing an estimated 70 million to 100 million adherents in China by 1999, was perceived by the Party as a threat to its authoritarian control over society.

Since July 1999, millions of adherents have been detained in jails, detention centers, labor camps, and other facilities across the country, where they’re subjected to torture, slave labor, indoctrination, and forced organ harvesting.

There are more than 4,700 documented cases of Falun Gong practitioners dying as a result of torture and abuse in police custody since 1999, yet the true number is likely many times higher because of the extreme difficulty of verifying information in China, according to the Falun Dafa Information Center.

At the vigil, Yu Ping, from New York state, and her mother, Wang Chunyan, a local from Fairfax, Virginia, had a special loved one in mind. Yu’s father, Yu Yefu, died in 2002 as a result of the persecution, she said.

Yu, now 39, was a 19-year-old freshman at the China Medical University in Shenyang, the capital of China’s northeastern Liaoning Province, when her father died during winter break.

After the persecution began, Yu had expected the loss of some freedoms but not a death in her family, especially since her father wasn’t a Falun Gong practitioner.

“It felt so unreal that I was detached in a weird way,” she told The Epoch Times. “It was almost like my feet didn’t step on solid ground and my hands didn’t touch anything real.”

During most of her high school years in her home city of Dalian, Yu’s mother, a Falun Gong practitioner, was forced to leave home to avoid being captured and coerced into giving up her belief. Therefore, Yu’s father was the one who took care of her.

Every day, he rode a bike to drop her off and pick her up from school. On their way home, she would sit on the back of his bike, enjoying an ice cream bar he bought for her. Sometimes, seeing him making much effort riding uphill, she would ask him, “Am I too heavy, dad?”

“No. You are not heavy at all,” he would reply.

She still remembers the morning when he died. He had been in a coma for half a month. She was back in Dalian and staying at her cousin’s house near the hospital. During that period, she wasn’t able to sleep well out of worry for her father. She didn’t even bother changing into her pajamas at night.

In the early hours of Jan. 3, 2002, Yu got a call from her aunt who worked at the Dalian Central Hospital, where her father was hospitalized, telling her that he was in critical condition.

She jumped out of bed and ran out to get a taxi.

Yu said she remembers seeing a dark hallway when she arrived at the hospital at about 3 a.m. She felt so lonely and sad. For some reason, she didn’t recall seeing anyone else. And the hallway seemed neverending.

As she was running, she comforted herself. “If I could make it to the ward, dad would be OK,” she said.

But he passed away within the next two hours.

In the early years after her father’s death, Yu was still in shock. Other family members dreamed of her father, but he never visited Yu in her dreams.

It wasn’t until 2003, when Yu went back home to Dalian for the first time after her father’s death, that everything began sinking in. Seeing her family’s apartment, she was overwhelmed by sorrow. Then, her father appeared to her in a dream. He told her that he was in a good place.

“I then realized that father hadn’t come into my dreams because he didn’t want me to be sad,” said Yu, with tears in her eyes.

On Jan. 9, 2002, Yu’s family went to the crematorium to collect her father’s remains. Her aunt showed her a black area on the skull with a diameter of about four inches, and told her, “Ping, remember, your father didn’t die a natural death.”

The official cause of death was gas poisoning; the family didn’t believe that.

In mid-December 2001, the family lost contact with Yu’s father for three days and then reported the case to the police. Eventually, he was found unconscious at home with the gas turned on.

When the family demanded an answer from local police, they were told, “If you want to know the reason for this man’s death, ask his wife to check in with us.”

It felt like a trap to capture her mother who was in hiding, Yu said. Surely, the cause of death should be shared with her grandparents, the parents of the deceased, she thought. The police, according to Yu, were trying to bait their family; if they didn’t turn in her mother, they would have to live with the regret of not knowing the truth about her father’s death.

The family found the circumstances around her father’s death to be suspicious. Several days before he was found unconscious at home, a police officer visited him at his workplace, now the Dalian Shipbuilding Industry Company, to find out the whereabouts of his wife. The officer hit Yu’s father, who fought back. Then, the officer threatened to have revenge on him.

Even after more than 20 years, Yu still couldn’t hold back tears when sharing memories of her father. However, the sorrow has subsided and has been replaced by peace in knowing that he is in a good place.

She now works in operational support for an e-commerce company in upstate New York, years after she first made it to the United States in February 2008 through an au pair care program. Her mother joined her in the country in 2015 through a U.N. refugee program.

Ping credited her practice for not sinking into an abyss of depression or resentment. “My practice of Falun Gong helped me stay positive throughout the difficulties and maintain the belief in good people,” she said.

‘Something Had to Be Done’

Another attendee at the Washington vigil was Makai Allbert, a 21-year-old senior at Fei Tian College in upstate New York. He said he would never forget how he found out about the Chinese regime’s repression of Falun Gong.

“This must be a joke,” the then-high school student thought to himself in February 2018, when he first searched for “Falun Gong” online and watched a video about the persecution.

Allbert and his twin brother, Rumi, had practiced Falun Gong since their sophomore year in high school in Arizona.

Prior to this, Allbert in particular thought there might be more to life than alcohol, drugs, and parties. So he began searching for answers in philosophical books.

That search ended in the summer of 2017, when a friend of his mom gave him a box of books. Among them was “Zhuan Falun,” the main text of Falun Gong, and a DVD teaching the practice’s meditative exercises.

Allbert said that within a week of practicing the exercises and reading “Zhuan Falun,” his health and his relationships with his family improved.

After practicing with his twin brother for about half a year, Allbert thought they should learn more about Falun Gong online.

Sure enough, there were, and they were being persecuted, according to the first video they found online.

“As the video was playing, I had to stop halfway because I could not believe my eyes,” Allbert said.

After the video finished, the twin brothers just sat there. Neither of them said anything. Then they played the video again.

“I remembered clearly, by the time the video finished [the second time], my face was completely wet. I was not necessarily crying, but tears flowed down my cheeks. I felt so much pity, so much sadness that people like me, just because they were meditating, just because they wanted to be better people, were killed,” Allbert said.

In 2019, an independent tribunal found that Beijing had been killing prisoners of conscience for their organs for years in order to supply the state’s organ transplant system on a “significant scale.” The main source of these organs was Falun Gong practitioners, the tribunal found.

“That just broke my heart,” Allbert said. “Just thinking about people being worried about their organs [being taken]—it’s unfathomable and made me very sick to my stomach.”

To him, July 20 marks another year of suffering. And the persecution doesn’t only concern Falun Gong practitioners; it involves everyone in China’s national security apparatus, and affects the entire Chinese population—and the rest of the world, he said.

A biomedical science major, Allbert has volunteered for Doctors Against Forced Organ Harvesting, an advocacy group of medical professionals. He said he wanted to tell more people about the persecution.

“It was very clear to me that something had to be done,” he said.