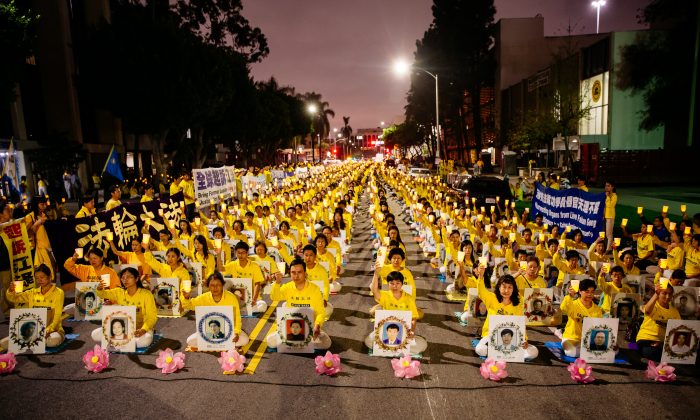 Over a thousand Falun Gong practitioners from around the world hold a candlelight vigil outside the Chinese Consulate-General in Los Angeles on Oct. 15. (Larry Dai/Epoch Times)
US

Practitioners of the spiritual discipline Falun Gong held a candlelight vigil outside the Chinese Consulate-General in Los Angeles on Oct. 15.

The vigil, which was attended by over a thousand Falun Gong practitioners from 36 nationalities, commemorated those killed by the Chinese Communist Party in a 16-year-long campaign aimed at eradicating the spiritual practice, and called for an end to the persecution.

Falun Gong practitioners young and old held glowing white cups as they sat in neat rows that stretched into the distance, outside the Consulate-General of China. Many had in front of them pictures of family members or friends who had been killed in the persecution in China.

Carolle Caza from Montreal, Canada, a practitioner of eight years, said she felt “very strong energy and powerful feelings inside” at the vigil. Caza, 63, who had attended a similar vigil in Washington D.C. last year, said the event was “a solemn and sacred moment.”

“We don’t have to speak anything, but we understand each other,” she said.

Estre Cota, Caza’s friend from Montreal, added that the vigil was important because “we have to show everyone why we are here,” that is, to tell the truth about Falun Gong and the persecution of it, she said.

Also at the vigil was Yang Qing from Chicago. Yang recalls a simpler, more innocent time in China when he used to be the contact person for a Falun Gong practice site at the prestigious Tsinghua University in Beijing, and wonders why the Chinese communist regime had to “mercilessly” suppress Falun Gong, a meditation practice that helped him quit smoking, and kept his family and friends healthy.

To the sides, other practitioners held banners demanding the Party stop persecuting Falun Gong. A banner denounced the harvesting of organs of practitioners, and another called for the prosecution of former Communist Party leader Jiang Zemin for crimes against humanity and genocide.

Jiang is the leader who gave the edict on July 20, 1999, to turn the entire machinery of the Communist Party against Falun Gong. He created the “610 Office,” an extralegal organization handed with the sole task of forcing Chinese citizens to give up the practice, and often tortured to death those who refused to do so.

Chinese authorities estimated that Falun Gong practitioners numbered 70 million in China in the late 1990s. The practice consists of five sets of slow exercises, along with the moral teachings of truthfulness, compassion, and tolerance.

Preliminary estimates suggest that nearly 4,000 practitioners have been killed through torture (the real number is likely many times higher, but it is hard to get such information out of China), while hundreds of thousands have been sent to labor camps and prisons. Researchers have also estimated that tens of thousands of Falun Gong practitioners were killed so their organs could be sold.

The vigil is part of several events held Oct. 15-17 calling attention to the persecution and allowing Falun Gong practitioners to share their experiences. A parade and a rally were held during the late morning and early afternoon of Oct. 15.