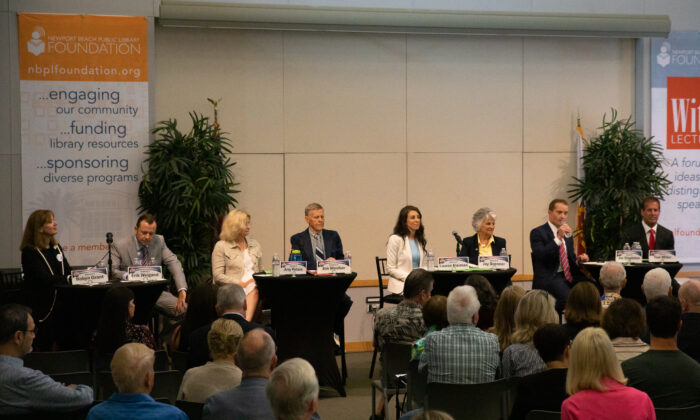 NEWPORT BEACH, Calif.—Candidates for Newport Beach City Council discussed how they would address the city’s most pressing issues at a forum Aug. 18 hosted by the city’s chamber of commerce.

Lucy Dunn, the forum’s moderator and a former CEO of the Orange County Business Council, asked the candidates to quickly respond to questions regarding airport noise, sober-living homes, state-mandated housing quotas, homelessness, crime, and public employee wage increases. The candidates were in unanimous agreement on most of these issues.

Voters will decide in the November General Election who should take office. Though each councilor represents one of the city’s seven districts, they are elected through at-large voting, in which each voter can cast ballots for all council seats.

With incumbent Councilwoman Diane Dixon terming out this year, District 1—which encompasses the Balboa Peninsula and West Newport—is up for grabs.

In attendance at the forum to vie for the seat included entrepreneur and business owner Tom Miller.

Miller said when it comes to decision-making, it should be up to the constituents he would represent.

“I will treat you with the respect that you deserve,” Miller said at the forum. “This is about you having a voice and making a choice. And that’s the true definition of democracy.”

The other candidate, Joe Stapleton, is the co-founder and president of a local investment company and sits on the city’s finance committee.

He said he is running to “continue to serve the city that has been so great to each of us.”

District 3, which covers most of northern Newport, is currently held by Councilman Duffy Duffield.

Erik Weigand, a city planning commissioner of six years, said he has been endorsed by all seven members of the current city council.

“A lot of these issues are regional,” Weigand said. “I’ve been here my whole life; I understand how the city operates. I know a lot about what it takes to be a city council member. And I think that I would do a good job representing the community.”

Jim Mosher, a retired scientist running for the seat, surprised the audience when he said, “I am the only candidate who has been to all of the council meetings for the last 13 years.”

“I think the people of Newport Beach need somebody for them questioning what the staff proposes as I have done for those 13 years,” he said.

Amy Peters, who ran for a seat on the Newport-Mesa Unified School District’s Board of Education in 2016, said she’s running to ensure a strong local government.

“We should all be involved in local government. And it should be locally funded, because we should be representing our constituents,” Peters said to the audience. “I want to keep Newport Beach the way it is. Not that we don’t make progress, but we protect our citizens’ rights, we protect our institutions, and we support our kids, our homeless, and all of the people that represent Newport Beach.”

Robyn Grant—an attorney, business owner, and college teacher—is running unopposed for the seat currently occupied by Councilman Kevin Muldoon, who is terming out this year.

“My number one goal is to be available to the residents present to listen and engage for the betterment of the community,” Grant said. “We need to prioritize solutions for public safety, housing, homelessness, airport impacts, and more. And we’ll do this by coming together listening to each other and participating in governance as a city and not polarize enemies.”

Grant offered an opening statement before joining the audience to watch the vying candidates.

“I make it a mission to not make up my mind until the last person has spoken at a city council meeting and everyone has given us their thoughts and ideas,” she said. “We have to find the ways to make sure we’re the safest city in the nation.”

Attorney and businesswoman Lauren Kleiman is in her third year on the planning commission. She said she has been endorsed by most of the current councilors.

“The government’s response to COVID showed us how much can change a year, let alone in a four-year council term, and how important it is to elect strong leaders to represent us,” she said. “There’s no substitute for listening and community collaboration but leadership requires action solutions and the relationships to execute. … I’m a demonstrated leader committed to public safety.”