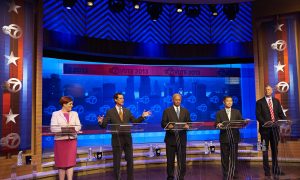 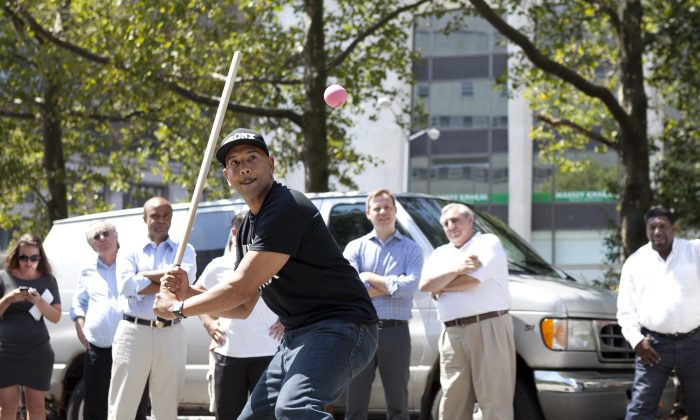 The first up to bat, just after noon was Joe Concannon, a City Council Reform Party candidate for the 23rd district in Queens.

George McDonald was one of the more overdressed mayoral candidates, stripping off his suit jacket to prepare for his turn to bat.

McDonald, who is a Republican mayoral candidate and the founder of the Doe Fund, grinned from ear to ear as he swung. Twisting to hit the ball, his trousers revealed eye-catching red-and-black patterned socks.

The next batter, Joe Lhota, former MTA chairman and a Republican mayoral candidate, hit one of the eight photographers who were sitting and lying in a huddle about 12 meters from him, trying to get good shots of the action.

Each candidate was allowed three warm-up swings, followed by eight pitches. To win, the requirement was maximum distance before the ball hit the ground.

The light-hearted event was a break from busy campaign schedules for the candidates.

Some candidates were given the choice whether they would pitch for themselves, or have Curtis Sliwa, the self-appointed stickball commissioner and founder of the Guardian Angels, pitch it for them.

The hot noon sun streamed down, as Sal Albanese, a Democratic mayoral candidate, stepped up to bat, successfully slamming the ball on the first attempt.

Albanese was one of the more appropriately dressed candidates, wearing a brown-and-white-speckled T-shirt, jeans, sneakers, and a U.S. Open cap.

“Bounce it higher Sal,” a man called before Albanese slammed the ball far off into the distance again, after a few failed attempts.

Sliwa called, “Give him a little room please,” as Diaz stepped up to bat. Diaz slammed the ball during his self-pitched warm up attempts, and chose to pitch for himself during the competitive part of the game.

“One-hundred-forty,” Sliwa called, after Diaz completed his first hit. After a few missed attempts, Sliwa announced Diaz had hit 160 feet, and then 250 feet.

Brooklyn Borough President Marty Markowitz said the event fell in the “silly season” for politics. “Whoever wins, loses, New York wins, because we all love our city,” he said.

Markowitz said stickball was a game that many people had played on the streets growing up a few decades ago.

“Stickball was our sport. It was a sport that you didn’t have to have any money, just a broom stick and you were ready to go,” he said.

When all was said and done, Diaz Jr. was the overall winner, with his 250-foot hit.

“As a young kid I was never able to hit the third sewer and I think I did that today,” Diaz said.

Mayoral candidate Bill Thompson arrived at 2:25 p.m., about 40 minutes after the rest of the candidates had finished and gone. A media swarm suddenly re-gathered as Thompson stepped up to bat.

“It’s been about 40 years since I have played stickball,” he said.

Nevertheless, Thompson was quite consistent with his batting, hitting a few balls into the trees. The majority of his first hits smashed into the ground, before bouncing off into the distance.

“You haven’t even hit one down the middle,” Sliwa joked, as he threw another ball to Thompson.

Afterward Sliwa noted that Thompson had hit every ball to the left. “Going into the Democratic primary you must go left or you won’t be in the running. He is so focused that even in his hitting he will still go left,” Sliwa said.

The proceeds from Tuesday’s stickball event were going to Harlem RBI, a youth organization founded in 1991, focused on baseball, softball, and academic achievement.

Elz Cuya Jones, the director of communications for Harlem RBI, said the organization started after volunteers cleared a vacant lot at 100 Street on the Upper East Side, and turned it into two baseball fields.

The organization now helps 1,500 children a year, from kindergarten through to high school, not only providing baseball and softball team membership, but also academic tutoring.

Cuya Jones said Harlem has one of the worst high school dropout rates in the nation, at about 58 percent, but since 2005, youth in the Harlem RBI programs had a 97 percent high school graduation rate.