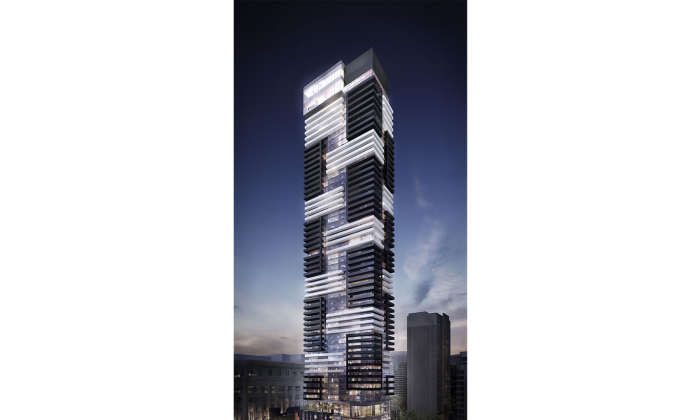 Construction started in January for YC Condos, Canderel's 66-storey project at Yonge and Grenville in Toronto. The condo building will be the first in Canada to offer Samsung digital home technology. (Courtesy of Canderel)
Canadian Content

Builder has busy 2015, with a host of projects underway
By Ryan Starr
biggersmaller
Print

The launch of construction on YC Condos during the first week of January marked the start of a busy year for Canderel.

One of the fastest-selling projects of 2014, the 66-storey YC Condos, located at Yonge and Grenville, features an infinity pool on the top floor, dubbed Aqua 66.

“We wanted to make a real splash,” Riz Dhanji, the vice-president of sales and marketing for Canderel, tells The Epoch Times in an interview at the company’s Bay Street office.

In celebration of the Chinese New Year, Dhanji notes, his firm has just released for sale sky lofts and penthouse units at YC Condos, ranging from 900 square feet to 1,400 square feet and priced from just under $1 million to $1.4 million.

The condo building will be the first in Canada to offer Samsung digital home technology, with doors that can be unlocked via mobile phone; cameras that monitor in-suite activity; and digital blinds, among other features. “No other developer has done this before,” Dhanji says.

YC Condos is Canderel’s latest development in the College Park neighbourhood, an area the builder has fundamentally transformed over the past decade.

The company started there in 2002 with the launch of the Residences of College Park, which includes 1,100 units between the two towers, among the city’s tallest when they were built. In 2006 Canderel bought the neighbouring 777 Bay commercial complex, with a retail plaza at the base.

Then in 2008 it introduced the mighty Aura, the tallest condo in Canada at 78 storeys, with nearly 1,000 residential units (and, owing to the building’s size, two condo corporations: one for the top section and another for the bottom), plus an array of major U.S. retailers in its super-sized podium, including Marshalls and Bed Bath & Beyond.

(Six of the 20 penthouse suites remain available for sale at Aura, priced from $1 million up to $4 million.)

“We’ve done close to 3,000 condos just in the College Park neighbourhood and we own close to one million square feet of office and retail,” Dhanji points out. “So we’ve really built the neighbourhood to where it is today.”

And they’re not done. The Aura master-plan includes redevelopment of the skating park—currently run down and lost amid the commotion at College Park—which will be turned into valuable public green space in the city centre.

There’ll also be an LED-waterfall feature cascading from the top of Aura, a light show set to be unveiled this spring. A test of the system last summer created a minor social media sensation, according to Dhanji. “The entire city was talking about it on Twitter.”

There’ll be plenty more to talk about with Canderel in 2015, with the company moving forward on several other projects in the Toronto area, including a mixed-use condo in North York and a building downtown.

But one of the builder’s most monumental projects is happening on its home turf: Montreal. Canderel has seen “unbelievable success” with the first phase of its Tour Des Canadiens development, the tallest, largest building in the city’s history at 52 storeys, with 550 units.

“It’s the first building Canderel has done in Montreal in 30 years,” Dhanji notes.

The project—being developed in partnership with Cadillac Fairview, the land owner, FTQ, and the Montreal Canadiens—sold out in three months, with much of the interest coming from the end-user market.

“That’s because of the Canadiens—they’re like a religion in Montreal,” says Dhanji, noting that many fans have been buying units to serve as game-night pied-à-terres.

This year will see the launch of another part of the development, a multi-phase community on an entire city block that will include up to four condo towers, commercial buildings, and a park, all connected with Bell Centre. The first building goes on sale this fall.

The Asian market is of great importance to Canderel, which counts on Chinese buyers for nearly 60 percent of its business, according to Dhanji, who lived in Beijing and Hong Kong for several years and speaks Mandarin.

“It’s a huge portion of our sales. So we do what it takes to court that market.”

It’s easy to see why: Chinese buyers understand real estate, and investors are looking for five- to ten-year returns, making them ideal buyers for Toronto condos like the thousands Canderel is building.

“The Chinese get it,” says Dhanji. “Wealth is built buying real estate.”