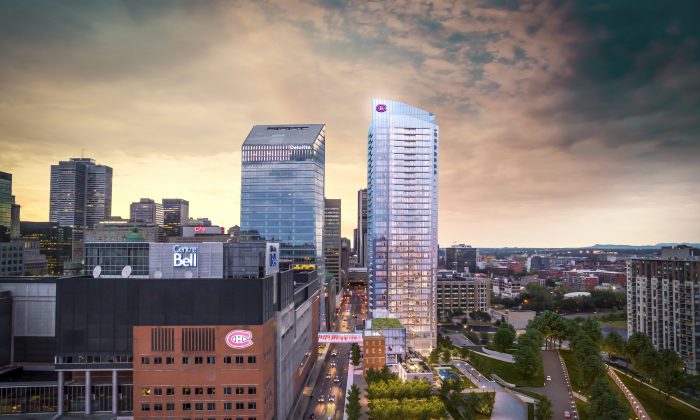 Rendering of Tour des Canadiens 2, located on the corner of Peel and St. Antoine streets just south of Montreal’s Bell Centre, where the Habs play their home games during the hockey season. (Courtesy of Canderel Residential)
Canadian Content

For developer Canderel Residential, 2015 was a year of many milestones.

Rock-bottom interest rates helped propel the completion of sales of all 634 units at YC Condos, a 66-storey tower under construction at Yonge and Grenville Sts.

“That was quite a feat, to have a project that size sell out in just over a year, including the penthouses,” Canderel’s vice-president of sales and marketing Riz Dhanji tells Epoch Times, noting the development—which boasts a rooftop infinity pool—was named High Rise Project of the Year by the Building, Industry and Land Development Association (BILD).

Canderel had several major project closings in 2015, including 605 units at DNA 3, the final phase in its King West condo cluster. A big chunk, but it paled in comparison to the 991 units the developer closed at 80-storey Aura at College Park, Canada’s tallest condo and Toronto’s newest landmark.

“Between two projects we closed about 1,300 units,” says Dhanji. “Usually it takes four or five projects to get to that.”

Aura’s completion marked the end of a nearly decade-long development that proved a game-changer for Toronto’s condo world: the first building of such magnitude on Yonge St., and the city’s only condo tower with 1,000-square-metre-plus floor plates (new tall building guidelines set a limit of 750 square metres).

Aura, visible from around the city owing to its snazzy LED-lit crown, is also Toronto’s first condo to feature large-format retail on the upper levels of a podium, with U.S. retailers Bed Bath & Beyond, Marshalls, and Hard Candy Fitness occupying 60,000-square-foot locations. “We started work on Aura in 2008,” Dhanji says. “It goes to show that when you’re building tall buildings it’s a long, complicated process.”

Three penthouses remain at Aura, ranging in size from 2,201 to 3,055 square feet, with the largest suite on sale for $3.7 million. As he looks ahead to the Year of the Monkey, Dhanji expects these top-floor units to attract interest from international buyers, Chinese especially, who’ll be drawn here thanks to the loonie’s big drop.

“Buyers from all over the world are looking at Toronto and saying, ‘I can buy real estate here for a third of the cost I can buy in New York or any other major city.’ They’re getting a huge discount.”

Canderel has plans to launch another downtown Toronto condo project later in 2016, Dhanji hints, but he won’t dish on the details.

At the moment his firm’s main focus is on phase two of Tour Des Canadiens, the residential component of Quad Windsor, a $2-billion mixed-use project on which Canderel is partnering with Cadillac Fairview, Fonds immobilier de solidarité FTQ, and the Montreal Canadiens Hockey Club. The project, a 37-storey tower, launched last fall and “it’s been a huge success so far,” says Dhanji.

“You’re right at centre ice in Montreal, with covered access to Bell Centre and a direct connection to the RESO underground network, which leads to the subway.”

The first commercial building opened at Quad Windsor in 2015, and three others are planned. The development, boasting a new three-acre park, “will transform the neighbourhood,” Dhanji says. “And it’s helped rejuvenate Montreal’s condo market, which has been weak the past few years.”

Tour Des Canadiens 2 is seeing keen interest from overseas buyers, Chinese in particular, and Dhanji says the trend will continue in 2016. “With the economy not as good and the yuan renminbi decreasing in value, a lot of Chinese are looking to get their money out now. And they’re looking at assets in Canada, a place for their kids and family. So we’ll be seeing a lot more of that sort of investment.”

How will Toronto’s condo market fare in the Year of the Monkey?

“I don’t think 2016 is going to be a record year for resale or pre-construction sales like we had in 2015,” says Dhanji. “There just aren’t as many big projects launching this year.” But interest rates likely “aren’t going anywhere,” he points out, “and I don’t think prices will increase as much as they did last year (by about 5 percent).”

Penthouses Put International Buyers on Top of the Heap

Canada’s Tallest Condo: Why Aura Is a Game-Changer

And the chronic under-supply of product on the low-rise side will continue to be a primary driver of condo sales. “The biggest issue we have is no listings,” Dhanji says. “I’ve never seen it before: there’s nothing out there.”

That’s good news for a high-rise developer like Canderel, as a lack of low-rise supply and housing affordability concerns push more purchasers toward bigger condo units instead.

“The biggest demand we’ve seen is for two-bedroom product and larger,” says Dhanji. “It’s getting more and more difficult for people to get a house in Toronto. So if you want to live downtown, you need to get a condo.”