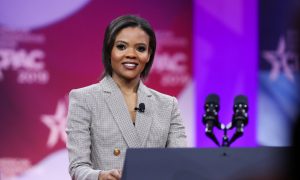 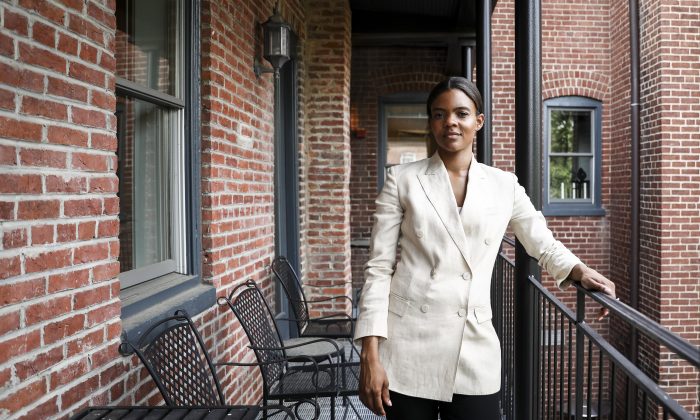 “There’s nothing that I cannot do as a black woman sitting in this chair or in this society, in this country, that you can do as a white man. It’s all about our choices,” writer, producer, and conservative commentator Candace Owens says.

Owens is the founder of Red Pill Black and the leader of the “Blexit” movement, which encourages black Americans to reevaluate and renounce their allegiance to the Democratic Party. She argues that the core of the Democratic platform is emotionally manipulating people—from women to minorities to the LGBTQ community—into believing they have been oppressed and victimized.

Owens recently spoke with Epoch Times senior editor Jan Jekielek, host of “American Thought Leaders,” to discuss the victim mentality, which she sees as a centerpiece of the leftist worldview.

“The core of what they’re trying to do is just capture people for votes with an emotional argument,” Owens said. “It’s just making them feel so outraged about something that they’re not actually thinking, ‘Does this even make sense?’ And usually, the answer is no. It makes no sense.”

Owens grew up sharing a bedroom in a small apartment in low-income housing in Stamford, Connecticut, and she took out $150,000 in loans to attend college.

“If it wasn’t from my perspective of seeing myself as a victor, as someone who could work harder … who was going to spend every second that I had learning … trying to add value to companies, I wouldn’t be sitting here today,” she said. “And that’s what I try to tell black Americans. Forget what they’re telling you about being a victim. That’s not going to take you from point A to point Z.”

All victim mentality does, Owens said, “is make you feel bitter and angry and outraged the entire time.” Regardless of one’s race, the key to success is the same: working hard, keeping the family together, and having good values. And that’s why, she argues, Japanese-Americans have prospered in America relative to other minority groups, even though they had once been severely mistreated and thrown into internment camps.

While Owens grew up with conservative values, she didn’t become politically conservative until a few years prior.

“It took a tremendous amount of humility for me to get where I am today, because I had to acknowledge formally that everything that I had thought before was wrong. The Republicans weren’t racist, that they weren’t the ones kicking me back, that I had learned everything the wrong way, that I had been not uneducated—but miseducated—and intentionally.”

Her path to conservatism was about learning to take personal responsibility for her future. Rather than seeing yourself as a victim of circumstances and being subjected to oppression, it’s about “getting in the driver’s seat of your life,” she said.

“We have been sold and administered a victim mentality to our own detriment. And we were sold that by the left, by the Democrat Party. … We’ve been manipulated by the conversation about racism for so long. At the same time, our communities have been destroyed over the last 60 years by liberal policies,” Owens said.

Welfare programs “systematically keep people below the poverty line” by incentivizing bad behavior, Owens said. A 1992 study by economists Richard Vedder and Lowell Gallaway found that people below the poverty line who don’t receive welfare are three times more likely to have moved out of poverty by the next year than welfare recipients. Furthermore, welfare programs were designed in such a way that when a low-income single mother married an employed father, she received significantly less in benefits.

When former President Lyndon B. Johnson launched his “Great Society” programs in the mid-1960s to eliminate poverty and racial injustice, 25 percent of black Americans were born out of wedlock. By 2015, that number had risen to 77 percent, according to the National Center for Health Statistics.

Owens believes, along with black conservative commentator and lawyer Larry Elder, that the “biggest issue facing black America today” isn’t racism, as many may believe, but instead the lack of black fathers in the home.

Among black Americans, approximately 72 percent of children live with a single parent, most often the mother. Compared to those who grow up in intact homes, children from single-parent homes are twice as likely to be suspended or expelled from school, and more than twice as likely to be arrested for a juvenile crime.

The main reason why the left focuses so much on victimhood and “manipulating emotions,” according to Owens, is “because when your policies don’t hold up, you need to have another way to get people to vote for you.”

“If you can destroy the victim mentality, you collapse the entire Democrat Party,” she said.

Strategy of the Left Backfires

According to Owens, the strategy of the left, especially identity politics, often backfires on them.

“They called [Trump] a racist, a sexist, a misogynist. At one point, they had him pegged as a rapist, which they’re still working on now. They had him pegged as incestuous. Remember they said that … he had feelings for his daughter. They tried everything, and the man is sitting in the Oval Office. So clearly, it backfired,” she said.

“But the great thing about the Democrat Party is, they never learn their lesson. They just double and triple and quadruple down.

“They aren’t realizing the long-term implications of the things that they’re doing,” by seeking to get away with “figurative assassination of the president right now,” she said.

“They are trying to take him out by any means necessary.

“Well, once you open that window, you can’t really undo that. Right? … You’ve made it okay for women who don’t like this politician to just say that they were sexually assaulted, for people to have no respect for the highest office in the land.

“That’s dangerous stuff that we’re playing with here. And you can’t undo that. And I think that you see that in certain regards. They don’t know how to handle it when it accidentally comes back on them.”

Owens argues that in their attempts to take down Trump, more moderate liberals—such as House Speaker Nancy Pelosi and Sen. Chuck Schumer—gave birth to and empowered the radicals, by espousing more radical policies in their efforts to combat Trump. The result, she said, are “real radicals” such as Reps. Alexandria Ocasio-Cortez and Ilhan Omar, who are shifting the entire Democratic Party toward the left.

The radicalization of the Democratic Party is hurting its election prospects, Owens said.

“They’re creating what I refer to as ‘liberal refugees’—the more moderate Dems that existed, these JFK Dems that you’re talking about—who are saying, ‘I don’t recognize this party’” she said.

“And I think what it’s going to amount to is, in 2020, you’re going to see Trump win by very large margins.”

Bribes on the Left

To Owens, the lofty promises of the 2020 Democratic field of candidates are simply different forms of bribes to incentivize constituents to vote for them.

“Which bribe are you going to take? Alright, you could take Bernie Sanders. And he’s going to just pay off all of your student loans. You could take Elizabeth Warren. She’s going to give you money because you’re black. Or you could take Joe Biden. He’s going to cure your cancer. I mean, they’re really outdoing each other in terms of who they can bribe,” she said.

“No one’s thinking about what the implications are there. Trillions and trillions of dollars—where’s it going to come from?”

And then there’s the issue of reparations, an idea that has gained traction in the United States since Ta-Nehisi Coates wrote the article “The Case for Reparations,” published by The Atlantic in 2014. But Owens believes the idea of reparations is both illogical and logistically infeasible.

“What about mixed-race babies?” or the Japanese who were put in internment camps, a dark moment in U.S. history that is much closer to the modern day than slavery? “It’s real, it’s horrible, but you’ve got to move on,” Owens said.

“Obviously, this is nothing more than an election technique to get all the black votes. And I think it’s an indication of how scared they are. They realize that something is shaking in the black community and that black people are speaking in ways that we haven’t spoken before.

“And I see it everyday online: more and more black conservative movements in sections and pockets of America are popping up. They know that they cannot afford to lose even 5 percent of the black vote, or their party is finished. They rely upon the black vote like you wouldn’t believe. And so I think it’s just an exercise in fear.”

Black voters constitute about 20 percent of all Democratic voters, according to 2018 data from the Pew Research Center, and they are known for voting overwhelmingly Democratic.

“I wanted to inspire an ideological civil war in the black community,” she said.

“We were thinking in terms of a monolith before and that’s been broken. Now, black America is not a monolith anymore.

“I think, one day, we’ll look back on this moment in history because I do believe that we’re going to see an exodus in black America from the Democrat Party.”