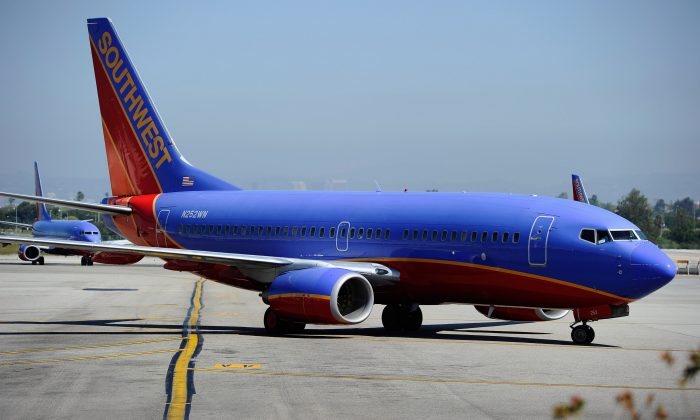 An airline employee who personally delivered lost luggage to a passenger’s home at midnight is being hailed as a “guardian angel” by the cancer patient she helped.

Sarah Rowan, 27, a customer service worker from Southwest Airlines was answering calls on the night of July 23 when she got a panicked call from Stacy Hurt, ABC News reported.

Hurt, 46, had just flown from Nashville to Pittsburgh on a Southwest flight but changed her reservation to a direct flight to make it home in time for her monthly chemotherapy appointment the next morning.

Originally from Bridgeville, Pennsylvania, Hurt was diagnosed with stage 4 colon cancer in 2014 and must remain on maintenance chemotherapy.

Her luggage remained on her previously booked connecting flight, which ended up rerouted back to Nashville due to mechanical issues.

“I sort of panicked,” Hurt told ABC News. “I said, ‘I need that luggage. It has a lot of items I need for chemotherapy tomorrow.'”

Inside Hurt’s luggage were medications for chemotherapy side effects as well as other personal items.

Rowan, a Southwest employee for just 6 months heard the panic in Hurt’s voice but also felt the kindness in her.

“She was just as sweet as can be,” Rowan told ABC News.”

“Things that are out of their control can be frustrating for people, but for someone who is going through so much to be so patient and kind towards us, I appreciated it so much.”

Rowan told Hurt that no matter the hour, she would continue to track her luggage and keep her updated.

Rowan knew that if Hurt’s luggage arrived after 1.30am it would miss the last courier and not likely reach Hurt until after her 9 a.m. chemotherapy session. When Hurt’s bag eventually arrived at Pittsburgh International Airport at around 2 a.m., she stepped in to help.

“I looked up her address to see how far away she lived and she lived about 20 minutes away,” Rowan said. “So in my head, me getting home a little bit later was less important than her getting the bag she needed for her chemotherapy treatment.”

The next morning Hurt woke up to a surprise—her luggage was there on the front porch with a note wishing her good luck for her appointment.

Hurt added that she already appreciated Southwest for accommodating her disabled son.

She posted the handwritten note on her Facebook where it reached Rowan’s boss and was later shared this week on Southwest’s official Facebook page.

“We are very proud of Sarah’s kind, empathetic actions that represent the best of Southwest hospitality and the legendary customer service that our wonderful employees aim to deliver every day,” the airline said in a statement to ABC News.

“She just epitomizes everything good,” Hurt said of Rowan, who she’s since communicated with on social media. “When you have cancer and you have chemo, this is the toughest thing ever.”

She went on to say: “For her to pick up on what a difficult situation this is and put my mind at ease and make me feel comfortable and to go through what she went through to get my luggage to me, she is an amazing person.”

In a reunion on Aug. 10, Hurt was holding a bouquet of roses and filled with excitement as she walked to the Southwest Airlines counter to deliver a surprise “thank you” to Rowan, WTAE reported.

Rowan’s handwritten letter gave Hurt some much-needed support in her fight against cancer.

“Fifty-one chemos—doing what I can,” Hurt responded.

As the pair met face to face for the first time, Rowan said Hurt’s manner on the phone pushed her to act.

“You touched me when you called me on the phone,” she said. “In that situation, people can—you know, it’s frustrating. You want your stuff. Things go wrong sometimes. You could not have been more kind.”

But it turns out Rowan also had another impetus for her actions. She lost her father to cancer, WTAE reported.

“I’m just here to tell the story,” Hurt said. “I was the recipient of a tremendous act of unconditional kindness.”

Flight Attendant Adopts Dog That Waited for Her Outside Hotel

A flight attendant adopted a stray dog who apparently never stopped waiting for her outside her hotel.

Olivia Siervers said that she regularly travels from Germany to Argentina for work. While in the South American country, she adopted a dog from the streets of Buenos Aires after he followed her around the city.

Siervers told Noticiero Trece that she tried to lose the dog because she was afraid of being attached to it. Siervers spent time feeding and playing with him, but she had to leave to go back to Germany.

“I tried to change my way because I didn’t want that he follow me back to the hotel,” she told the website, according to a translation.

Hilarious In-Flight Safety Videos; Watch and Learn Why Airlines are Using Them

However, when she returned to Buenos Aires, the dog was there again, waiting for her at the same hotel where she had stayed before. The same scenario played out again and again before she applied to transport him from Argentina to Germany.

According to The Dodo, the dog, which she named Rubio, now lives with her and her two other dogs.