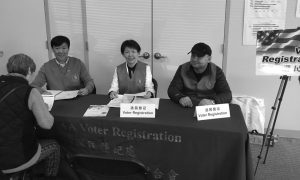 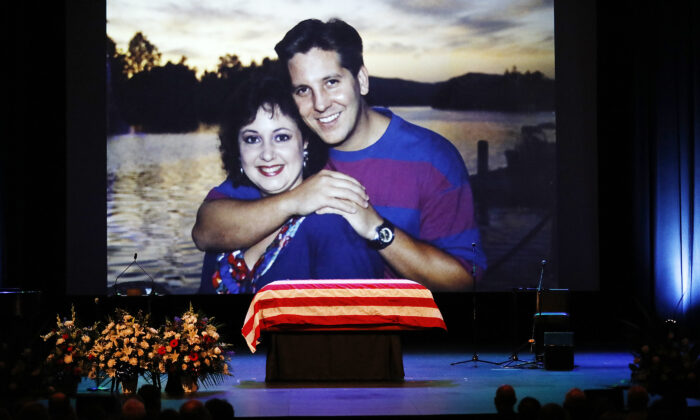 An image of Ventura County Sheriff Sgt. Ron Helus with his wife Karen is displayed during a memorial service in Westlake Village, California, on Nov. 15, 2018. (Al Seib-Pool/Getty Images)
US News

The widow of a slain police officer has spoken of her disappointment that a charity tribute to his sacrifice turned into a “politically charged” national story after it was canceled over the political affiliations of the guests.

The “Blue Bowl” football game in Ventura County, California, was to occur this coming weekend to raise money for the family of Sergeant Ron Helus, who was killed in the 2018 Borderline Bar and Grill shooting, and as a tribute to other fallen officers.

But the event is now on hold after the police chief and sheriff’s office withdrew support—including the honor guard—after questioning the involvement of a local Republican politician, and a Trump-supporting singer who was billed to sing the national anthem.

The organizers claim that the overall line-up, which included local Democrats, was not partisan and that their speakers do not touch on politics.

They balked at the attitude of the police chief, who they claim said, “This is not Trump country and that slogan making America great again is not popular within 1,200 square miles of this event!”

But the late sergeant’s wife, Karen Helus, refuses to choose between her respect for President Trump and her loyalty to the deputies who she says have been with her “every step of the way” since her husband was killed in the line of duty.

Together with her son, she broke her silence on Oct. 2 on the controversy that exploded locally last week before flooding into the national media this week.

“Since the tragic events of last November, I have intentionally avoided relating political causes to the loss of my husband,” she said in a statement provided by the sheriff’s office.

She said that she was “sad and disappointed” that the political storm was now distracting from the point of the event.

“Since this event has evolved into more about politics and less about our loss, I feel it is important to remind everyone that I have met our president on several occasions and continue to respect and support him due to his unwavering support of my family and all law enforcement.”

But Helus said she also wanted to thank the Ventura County Sheriff’s Office who she described as a her “lifelong family” who had stood by her “every step of the way” from accompanying her to fundraisers to getting her nails done.

Sheriff Bill Ayub said in the statement that he had initially approved support for the event, noting it was organized by an out-of-state organization. “As we drew closer to the actual event, they seemed to become more focused on political agendas, and less and less so on the victims and their families.”

“I felt it was in the best interest of the department, the victims, and our community to not directly participate in the event, which the organizers have since canceled.”

Stressing that their events are not political, the Fallen Officers said (pdf) that the original line-up of VIPs had included the district’s Democrat assembly member, Jacqui Irwin, and the public safety liaison officer for the California Democrat Governor.

Also on the billing was local actor Scott Baio, a Republican supporter who attended the same church as Sergeant Helus, and Joy Villa, a singer known for being a Trump supporter.

But when they later added Ronda Kennedy, the Republican candidate who had run against the already-invited sitting assembly member, they got a phone call from Thousand Oaks Police Chief Tim Hagel.

Fallen Officers claims Hagel said it was “too political,” threatening to withdraw support if Republican guests were not changed.

“The only thing you could have made this worse was by inviting Dick Cheney or Sarah Huckabee Sanders,” Hagel said, according to the Vice President of Fallen Officers, Mike Randall.

Randall claims that Hagel told him, “These people do not represent our fabric of our community and nothing good will come out of this event by having them there.”

According to Randall, Hagel said in one call, “I’m looking at her website right now and it starts out with Making America Great and that slogan is not popular for over 1,200 square miles around here.”

“We would have to put major security teams around here. She is not representative of our ideology or our community,” Hagel said, according to Fallen Officers.

Villa said that she was heartbroken by the situation in a video posted on Twitter. Describing herself as “a Trump-supporting conservative, and a black Latino woman,” Villa said that her father was in the military police and that she had many friends who are retired. “I back the blue,” she said.

Helus’s son, Jordan Helus, said that he knew Hagel personally, describing him as “a kindhearted man who does not deserve to be treated in any other fashion as such.”

Helus said he supported the organizers inviting people “from a variety of political views, beliefs, and mindsets.”

“In fact, I am very thankful and appreciative of their efforts organizing such a large event.”

“Where they went wrong,” he said, “was taking conversation between them and the [sheriffs] out of context and try to paint Tim Hagel as the villain.”

“I do not have all the facts and tend to keep a very open mind,” said Helus. “My hope is that this was all a huge miscommunication and that the Blue Bowl organizers did not intend for the event to turn into a political stage.”