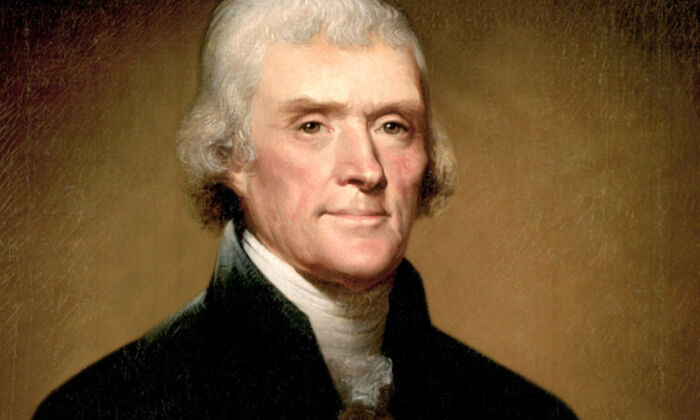 Thomas Jefferson Elementary is one of seven schools in the Cleveland Metropolitan School District named after founding fathers of the United States, or leading statesmen, targeted for renaming. (www.biography.com)
US News

Continuing its march on what could be called cancel culture or social change, the Cleveland Metropolitan School District is considering renaming seven of its schools because some of the namesakes were slave owners and had “racially problematic pasts.”

Two of the decades-old elementary schools targeted were named for America’s founding fathers, Thomas Jefferson and Patrick Henry, who is known for saying, “Give me liberty, or give me death!”

School officials announced late last week that an ad hoc committee was reviewing the name change considerations and plans to have public hearings on the issue over the next two months.

Dates for the hearings have yet to be scheduled.

The district began considering renaming the schools near the beginning of the 2021-2022 school year.

The possible name change considerations stem from the 2020 death of George Floyd, a man who died at the hands of Minneapolis police.

In a statement, Trent Mosley, the chief strategist and implementation officer for the CMSD, said, “The (renaming) process has been thorough and fair … the way they have approached it has been impressive.

“We want our students to be proud of the buildings they walk into.”

In addition, 11 other schools in the school district could be targeted for name changes.

Following Floyd’s death riots broke out in major cities throughout the United States, resulting in the deaths of, and injuries to, a number of law enforcement officers trying to keep order and protect businesses.

Downtown Cleveland was heavily damaged during the riots as they extended to its prestigious Playhouse District.

Businesses and restaurants already were trying to recover from the hardships brought on by the Chinese Communist Party (CCP) virus.

A determination on whether to change the names of the schools is expected in March, according to school officials.

Thomas Jefferson was the lead writer of the Declaration of Independence. He also was the first secretary of state of the United States (1789–94), its second vice president (1797–1801) and, as the third U.S. president (1801–09), he was responsible for the Louisiana Purchase.

Patrick Henry was one of the first major orators in the country and a major figure of the American Revolution.

He was perhaps best known for his words “Give me liberty or give me death!” which he delivered in 1775. He was independent Virginia’s first governor (serving 1776–79, 1784–86), and also was a key figure in the passage of the Bill of Rights.

Both Jefferson and Henry were slave owners, causing concern in Cleveland where a majority of students are from minorities, according to information from the district.

No one at the Thomas Jefferson Library could be reached for comment on Jan. 4. The library was closed due to inclement weather, a phone recording said.

Other elementary schools under consideration for renaming are: Albert Bushnell, Louis Agassiz and Luis Munoz.

Two high schools in the CMD also are targeted for a name change: John Marshall and James Ford Rhodes.

Marshall served as Chief Justice of the United States Supreme Court from 1801 to 1835.

Known as the Great Chief Justice, Marshall was the principal architect of the American system of constitutional law. His interpretations of laws are still used as examples today.

Rhodes was an American industrialist and historian born in Cleveland. After earning a fortune in the iron, coal, and steel industries by 1885, he retired from business.

He devoted his life to historical research and publishing a seven-volume history of the United States, published from 1893 to 1906 and later an eighth volume in 1920.

Rhodes treated slavery as a disaster for the South, but not a personal issue for white Southerners, who he thought deserved sympathy rather than censure.

Rhodes downplayed the importance of the abolitionist movement, instead focusing on mainstream leaders such as Daniel Webster for his promoting a deeper nationalism.

Two resolutions passed by Cleveland City Council in 2020 also urged CMSD to change the names of the schools.

Neither Conwell nor Mooney could be reached at their office or home phones and did not return comment.

At the time Cleveland City Council supported the resolution, Conwell said, “I know the children in my community and African Americans should not go to a school that’s named after a slaveholder that had my ancestors and their ancestors in slavery.

Last summer the ownership of the Cleveland Indians was pressured by Baseball Commissioner Rob Manfred to remove Chief Wahoo, the team’s 120-year-old mascot.

The commissioner later moved the 2021 MLB All-Star Game from Atlanta to Denver, contending Atlanta’s fortified election laws were racist, and because the team would not remove Braves as its mascot.

Native American groups also claimed that Chief Wahoo was a racist symbol and a “bad representation” of their people.

The Indians changed their name to Guardians, after concrete figures on the nearby Lorain-Carnegie Bridge, to the dismay of numerous fans across the United States.