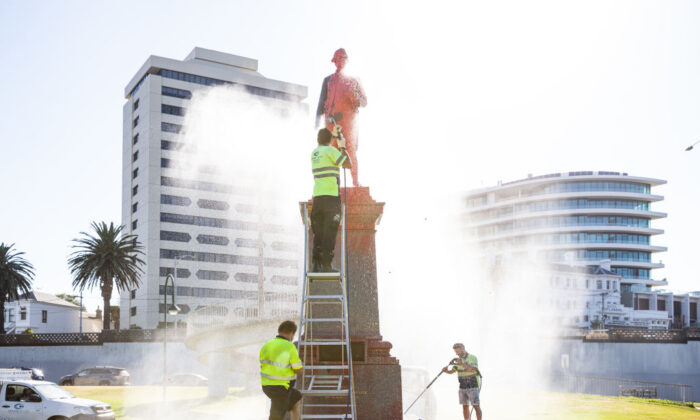 Workers wash off red paint that was poured on a statue of Captain Cook at St. Kilda beach in Melbourne, Australia, on Jan. 26, 2022. (Diego Fedele/Getty Images)
Viewpoints

Cancel Culture Comes for One of Australia’s Founding Fathers

Recently, efforts have been made to “cancel” figures linked to the European settlement of Australia.

Statues of Captain James Cook, who discovered and claimed the east coast of the continent in 1770, have been defaced. There has also been vitriol directed at the first governor of the colony of New South Wales, Captain Arthur Phillip, as the “invader” of Australia, even though he did his utmost to have friendly relations with the Indigenous populations and learn as much about their language and culture as possible. Indeed, on Phillip’s return to Britain in 1792, two Indigenous men, Bennelong (whose name is given to Bennelong Point in Sydney as well as a federal electorate) and Yemmerrawanne, accompanied him.

Now cancel culture has come for one of the most significant figures in Australia’s history, a founding father of the nation, Sir Samuel Walker Griffith.

Born in Wales, Griffith came to Australia at the age of eight. He went on to study law at the University of Sydney, became a successful barrister, and then turned to politics, being elected to the Queensland Parliament in 1871. Within three years, he was promoted to attorney-general and oversaw a number of important reforms, including a bill to legalise trade unions.

Griffith was twice premier of Queensland between 1883 and 1893, resigning that year to become Chief Justice. Perhaps the most enduring achievement of his time as Chief Justice is the drafting of a criminal code—the first in Australia, subsequently adopted in other states and in other countries.

Representing a codification of the English criminal law at the time, Sir Samuel drew inspiration for this from his time in Italy in the 1860s, basing his code on the Italian penal code of the era, known as the Zanardelli Code (after the minister of justice at the time, Giuseppe Zanardelli). An excellent linguist and a man of letters, Griffith also produced the first English translation of Dante Alighieri’s “Inferno” some years later in 1908.

During his time as Chief Justice of Queensland, Sir Samuel Griffith was an ardent supporter of federation. Indeed, he produced a draft constitution for a federated Australia that was adopted at the 1897 constitutional convention, at the same time providing advice and support, including lobbying of British politicians to support federation.

Once federation was achieved in 1901, attention turned to the setting up the legal apparatus of the infant nation, and this included the High Court of Australia. Sir Samuel was chosen in 1903 as the first Chief Justice of Australia, serving until 1918.

Therefore, he played an integral role in securing the system of government that has made Australia one of the most stable, prosperous and long-lasting liberal democracies in the world.

In recognition of his work, a university, a city in New South Wales, a suburb in Canberra, and a federal electorate are named after him. Australia’s foremost legal association, the Samuel Griffith Society, was also named in his honour.

However, now cancel culture is coming for Sir Samuel Griffith. A symposium took place recently at Griffith University in response to a book by controversial author Henry Reynolds. At the event, it was proposed that Sir Samuel’s name should be removed from the university, the suburbs, and the federal electorate that bear it.

Sir Samuel’s alleged crime? Being an “enabler” of massacres by not doing enough to stop skirmishes between Europeans and Indigenous groups during his time as attorney-general and Premier of Queensland. In other words, the argument being made is that Samuel Griffith should be cancelled because of things he didn’t do, rather than anything he is accused of having done.

As noted by the Executive Director of the Samuel Griffith Society, Xavier Boffa, a broader cultural norm is at stake here.

In a newsletter to its members, Boffa wrote, tellingly:

“Whatever you think about Samuel Griffith or any other public figure—just as we can acknowledge the talent of great sportspeople, artists, and musicians without necessarily endorsing all of their actions or beliefs—we should be able to separate the clear good done by those who came before us from debates about more contestable aspects of their legacies.

“Furthermore, it isn’t necessary to agree with everything Samuel Griffith did or believed in order to acknowledge and commemorate his immense contributions to our nation. Indeed, Sir Samuel was regarded as a liberal reformer who worked with both conservatives and unions at different times to both ban the importation of foreign labour and used the military to break up strikes and demonstrations.”

Whatever Samuel Griffith did or didn’t do, a reasonable person can only agree with Boffa. As the primary author of the Constitution and the first Chief Justice of the High Court, Australia and its people owe Sir Samuel a great debt of gratitude for our healthy democracy and system of responsible government, for our federalist structure, and for the constitutional separation of powers and the rule of law.