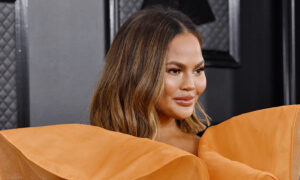 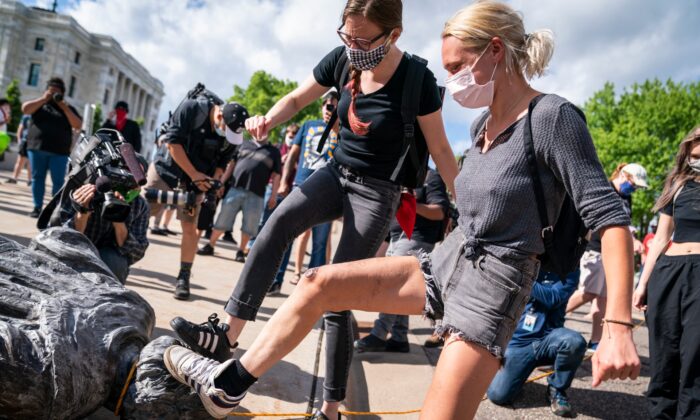 People take turns stomping the Christopher Columbus statue after it was toppled in front of the Minnesota State Capitol in St. Paul, Minn., on June 10, 2020. (Leila Navidi/Star Tribune via AP)
Northern California

Cancel Culture: A Remanifestation of Fascism 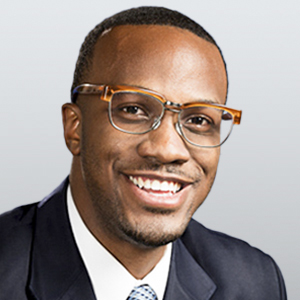 If history teaches us anything, it’s that the past is perhaps the single darkest shadow haunting humanity.

Since the dawn of human civilization, our modern world has made countless attempts to rewrite, escape, and even purge its most dreadful memories, while clinging dearly to that which is better remembered.

Let’s face it: The past can evoke indescribable pain, awaken grief, expose secrets, produce anger, and move us to vulnerable places.

Nonetheless, the past isn’t all bad. The past can inform present reason, provide reassurance for the future, reveal hidden truths, and remind us of where we’ve been, who we are, and what we can overcome.

Allow me to elaborate.

Some years ago, during what many would call the first manifestations of the “cancel culture” movement, I attended a U.S. history lecture. Spirited debate over the existence of racist, xenophobic, and white supremacist symbols in the United States consumed the large auditorium.

As an ardent proponent against racism, I was naturally inclined to agree with those who vehemently argued that such symbols should be wiped from our nation’s memory. After all, I pondered, nothing good could come from the continued existence of such symbols in our culture.

Another student then decided to take the debate one step further. The young man suggested that certain religious statues and symbols should be destroyed. In particular, he argued that all statues, paintings, stained glass, and other types of imagery depicting Jesus as a white man should be torn down.

History wasn’t lost on me. I understood that Jesus was born in a region geographically close to Egypt, which raises questions about his physical appearance.

As a Christian and as a black man, this was my first time facing the dichotomy of a challenge to symbols of my faith and, by contrast, to my strong opinions about race relations. After much reflection, I decided that my relationship with God was far too valuable to be dependent on or beholden to a certain illustration or depiction of Jesus. I took note that those symbols were reminders of how far our society and culture have come.

The goal of this debate was noble: to purge our nation of painful reminders of racial supremacy.

It’s akin to the belief that purging our nation of the Declaration of Independence would remove the painful reminders of our nation’s empty promises of equality for all in 1776. Removing symbols will never purge the wrongdoing. Purging the wrongdoing, on the other hand, could better remove the behavior causing the harm.

That led me to a more intimidating question—the question of where it all ends. That is, at what point would the destruction of symbols that represent that which offend many in our society be enough? With that, I questioned what destroying some of those symbols could cost our culture in the long run.

George Orwell undoubtedly grappled with that same question 72 years ago when he decreed, “He who controls the past controls the future.” That world-renowned author enlightened us to such an inherent truth in the aftermath of World War II and the Holocaust.

Sure, we don’t presently face the tyranny that terrorized our ancestors and stained red the moral fabric of history. Nevertheless, we bear witness to a movement with the underpinnings of revolutions that produced the same terror: namely the “cancel culture” movement.

Today, a growing number of Americans and civilians worldwide are becoming increasingly unapologetic about their distaste for their governing institutions, influencers, creeds, and ideologies. In an altruistic effort to reinvent the institutions that govern and influence our culture, many have taken it upon themselves to purge those institutions—religions, governments, and even private enterprises—of a dreadful past.

Around the world, we see statues and symbols representing various creeds and faiths come tumbling down when they reflect an image of a particular race. We witness constant public degradation and the shaming of “moral transgressors.”

We see government officials removed from office without so much as an opportunity to address accusations against them. We’ve seen classic cartoon characters such as Speedy Gonzales and those by Dr. Seuss removed from television and bookstores. In short, the conduits and characters for moral transgressions are being purged, but the behaviors causing those transgressions aren’t.

Locally, institutions throughout the nation are following suit. In early 2021, 44 San Francisco school sites had the names of authors, presidents, conquistadors, and a U.S. senator removed from their buildings in an effort to purge the school district of any “unworthy” iconic figures.

Similar tactics were employed by the Nazis less than a century ago. Some months following Hitler’s reign in 1933, the German book trade produced a blacklist with the names of more than 200 authors. Universities set the authors’ books aflame. They applied the same logic to statues and memorials. In an effort to purge Germany of wooden war memorials that they deemed offensive, the Nazis destroyed all such memorials. Those were once deemed harmless acts to cleanse Germany of its indecent past. It was rewriting history in the name of “justice.”

Soviet Union (USSR) leader Joseph Stalin used similar means by which to ethnically and religiously cleanse the USSR. Among the most controversial means, Stalin attempted to completely destroy religion and replace it with cultural and governmental dogma. Tearing down age-old religious shrines, paintings, and symbols, Stalin erected new shrines and introduced new martyrs for the worship of Russia’s revolutionist history.

Time and again, “cancel culture” has worked to discredit influencers, destroy religion, and rewrite history. Other tyrants such as Idi Amin, Saddam Hussein, and Muammar Gaddafi have employed similar tactics and have ultimately led movements resulting in mass oppression or genocide. In the past, we would have called those pioneers of “cancel culture” by their true name: fascists.

Fascism is the forcible suppression or destruction of opposition—the opposition being anything that doesn’t align with the fascists’ opinions or beliefs. The word fascism is derived from the root word “fascio,” which is the Italian word for bundle. Taken together, fascism represents “bundles of people” who suppress or destroy virtually anything that opposes their ideologies. “Cancel culture”—however well-intentioned—is a modern-day remanifestation of fascism.

As individuals and as a nation, we can’t forget our past, lest we forget ourselves in the process. Most importantly, as illustrated by the tyrannical regimes of Hitler, Stalin, Amin, and Hussein, purging difficult memories from history will only leave the next generation uninformed and vulnerable to repeating the same mistakes.

Sure, our nation’s history is rooted in seeds of hatred, greed, and human indifference, to say the least. The bitterness of 400 years of slavery endured by our black ancestors is a difficult past to face. I face it every day. Nevertheless, it reminds us to not repeat the same mistakes and of what our nation has overcome.

For 245 years, our nation has overcome unimaginable bouts with the inequality that has plagued generations of color, including the three-fifths compromise that saw the government fail to ensure equal protection for all blacks under the law and perpetuated unfathomable injustices in our criminal justice system. The Civil War also challenged the foundations upon which our nation rested and came with the bloody cost of more than half a million men, women, and children.

Beyond the brutal injustices and grave mistakes, you’ll find within the darkness of our past countless lanterns of hope.

Our nation united in the face of injustice, armed with weapons of love and courage. They marched. They fought. They bled. They wept. They made every effort possible to bring about equal protection under the law, women’s suffrage, and an end to slavery and segregation.

Beyond our beloved shores, our nation’s military fought in World War II to defend our freedom and put a stop to the genocide that killed about 6 million Jewish people. Though we’re far from it, we continue along the path to hold true to our values.

As we journey that stony path together, let’s take courage and face our nation’s history, the good and the bad. Our nation will never be perfect, but each of us can do our parts—collectively and individually—to make real the promises of this nation for ourselves and for those around us. Remember, regardless of its imperfections, the United States is still our country.

Jonathan Madison
Follow
Jonathan Madison worked as professional policy staff for the U.S. House of Representatives, Committee on Financial Services. He regularly provides opinion on Fox Business Mornings With Maria and has appeared on the following networks and television shows: Saturday Night Live, KRON 4 News, NBC Bay Area News, and KTVU Channel 2 News. As chairman of the Alameda County Bar Association Real Estate Section, Jonathan leads a team of real estate attorneys in educating the County of Alameda in simple and complex legal matters. Beyond this, he leads a prison ministry at the San Francisco County Jail. He is lead attorney at The Madison Firm and can be reached via email at Jonathan@themadisonfirm.com.
TOP NEWS