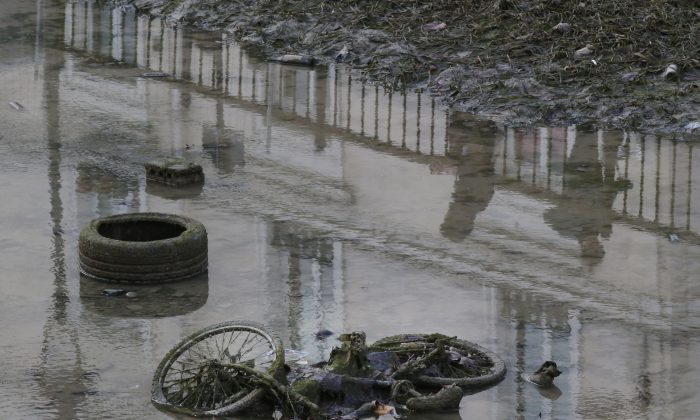 A bicycle and a tire lay on the ground of the canal Saint-Martin as the canal is drained for maintenance in Paris, Wednesday, Jan. 6, 2016. Paris Canal Saint-Martin will be drained this week for cleaning, first into a puddle then when the final underwater creatures have been moved to safety into a dry ditch. The canal, popular with Parisians and visitors alike for its arched bridges, locks and trendy surrounding neighborhood, will be emptied for the first time in 14 years. (AP Photo/Michel Euler)
Europe

Canal Saint-Martin, Paris Waterway, Emptied to Be Cleaned for 1st Time in 15 Years

The famed Canal Saint-Martin in Paris was drained for the first time in 15 years, and workers cleaning it found an array of objects—including a motorcycle and a fire extinguisher.

“The full inventory is yet to be done – the fish have been evacuated and tractors will be brought in to drag away the vast number of items at the bottom,” reported the Guardian.

“But the view from the bridges already reveals an extraordinary amount of debris that has been tipped into the canal in the past decade. There are scores of Paris’s Vélib hire bikes, lots of other bikes, myriad chairs of all descriptions, at least one motorbike, supermarket trolleys, shopping caddies, public dustbins, a fire-extinguisher, a children’s doll’s pushchair marooned in the middle of the canal, street signs, umbrellas, and wheelie suitcases.”


Previous operations have turned up two shells from World War I, multiple safes, and 56 cars. The canal was originally commissioned by Napoleon in 1804 to provide the capital with goods and fresh water, reported France24.

The site in recent years has become a favorite spot of Paris’s “Bobos,” or wealthy leftwingers who gather for drinks on its banks.

There were lots of mud-caked wine-bottles and cans turning up in the cleaning.


“That’s Paris for you, it’s filthy,” said Bernard, a public-sector worker who stopped to watch. “The last time, I don’t remember seeing so much rubbish in it. I despair. The Bobos are using it as a dustbin.”

The deputy mayor in charge of the environment, Celia Blauel, urged citizens not to throw things into the canal after the makeover is finished—dangling a potential reward.

“‘If everyone mucks in and avoids throwing anything in the water, we might be able to swim in the canal in a few years, as in numerous other European cities,” she told Le Parisien. She said the city plans on making the Villette basin upstream of the canal fit for swimming.

After the three-mile stretch of water was emptied, crews came in to clean out the rubbish. The 9.5 million euro operation will keep the water at 50 centimeters (1.6 feet) for three months as cleaning continues. The operation started with the team fishing out the 4.5 tons of trout, carp, and bream that have made their home in the canal. Then, the clean-up started.

“Thanks to the workers of Paris that cleaned the canal Saint-Martin,” said Mayor Anne Hidalgo via Facebook.

“The Canal, we love and respect it! The cleanliness should be everybody’s business.”