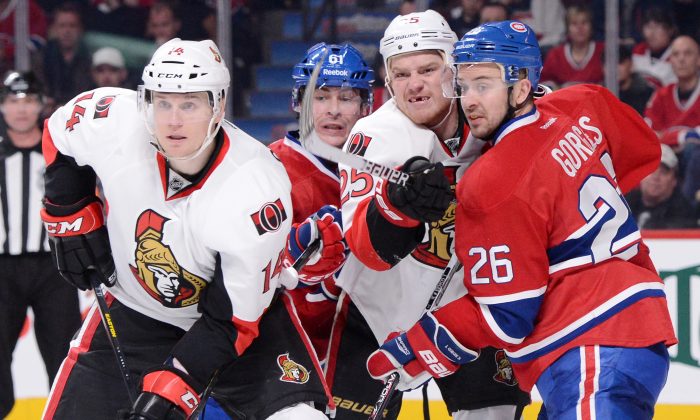 Goaltending and youthful exuberance in full display
By Joe Pack

The Ottawa Senators and Montreal Canadiens face off in an all-Canadian playoff series, the first between the two teams since Ottawa’s re-introduction to the NHL 20 years ago. Both are fast, skilled teams with great goaltending, who have seen their youngest players take on a great amount of responsibility.

And though the Canadiens finished second in the conference and the Senators seventh, there is no clear favorite here. Rivalries are made in the playoffs and with this being their first meeting, perhaps this series will create a more fierce dynamic between both clubs.

Ottawa general manager Bryan Murray has seen his team decimated by injuries in 2013. For extended periods, the Senators have lost their top forward, top defenceman, and starting goalie.

Jason Spezza has yet to return from nagging back injuries, goaltender Craig Anderson missed over a month and is only now back in form, and star defenceman Erik Karlsson made a miraculous 10-week recovery from a tear to his Achilles tendon.

Karlsson looks to factor prominently in the series. He alone wipes the underdog label off this team. Last season’s Norris Trophy winner facilitates a degree of speed and offence that cannot be replicated by many in his position.

Paul MacLean, shoe-in for a Jack Adams coach-of-the-year nomination, has to be commended for corralling a young crop of exciting rookies. While Spezza’s absence is deeply felt, MacLean has put a system in place that is being replicated by the Senators’ American Hockey League affiliate, the Binghamton Senators, and thus has created an ideal environment for rookies.  All the pressure on their rookies to make up for lost talent was diminished by the fact that they could graduate from Binghamton and slip in to the NHL lineup without changing an element of their game. Systems were in place, roles defined, and expectations were the same.

The story behind this year’s Montreal Canadiens bench boss, Michel Therrien, is also a fascinating one. Not since Leo Dandurand in 1934 has a head coach for the Canadiens had a second chance to lead this organization.

Bob Gainey coached two separate times but in both cases had the interim label. Therrien first coached Montreal through 2000-03 when he recorded a .500 winning percentage over three seasons and was called back for an encore before the start of this season.

Some believe his hard-line approach has softened slightly and his dealings with elite talent on the roster are more constructive and co-operative than in the past. Players appear to have bought-in to Therrien’s message as nine skaters on the roster scored at least 25 points. Whatever the case, the results have overwhelmingly been positive, as a team that missed the playoffs only last year has made the most out of a fairly similar roster.

Again, the youth on this squad has and will factor meaningfully in the coming weeks. Rookie Brendan Gallagher, at 5 feet 8 inches and 174 lbs, has impressed enough to put himself in the conversation for the Calder Trophy for rookie-of-the-year. And Russian center Alex Galchenyuk played in all 48 games for Montreal, scoring 27 points.

The most weight, however, will be carried by the team’s number one goaltender and top defencemen. The return of Andrei Markov, after years of injuries that banished him almost into complete obscurity, was remarkable. Markov played in all 48 games, playing an average of 24 minutes per game. He contributed 30 points of which 23 came on the power play.

Goaltender Carey Price put up good numbers this season until a late slide in the final two weeks erased much of his accomplishments in the minds of some. In advance of the playoffs, Price began wearing a new set of equipment that needed to be game-worn before the postseason commenced.

His first game with the new pads was the landslide in Toronto when he surrendered three goals on the first four shots. There should be no concern, however, with the Habs’ netminder. Price has carried the Canadiens on his back in past seasons and has one of the coolest demeanors of all NHL goalies.

Yet it is perhaps the story of defenceman P.K. Subban that will garner the most attention between these two clubs. Subban missed the start of the campaign negotiating his contract with new general manager Marc Bergevin.

In the end, he likely took less money and contract term than he deserved, and has since put up a Norris Trophy-worthy season. With another negotiation on the horizon for Subban in 2014, these playoffs could be the impetus for Bergevin to pay top-dollar for, what many would call, the face of the franchise. With a comparable superstar in Erik Karlsson on the other side of the ledger, watch for Subban to take full advantage of his opportunity.

Both sides have equal parts goaltending and youthful offense, but Ottawa has the advantage in size and toughness. Ottawa’s big defense corps and imposing forward Chris Neil will give Montreal’s small forwards a rough ride. Expect Canadiens’ tough guy Brandon Prust to provide the push back in what has been a breakout season for him.

Versatile forwards that can score, lean on other teams’ top players, and at times drive the ship, have become a premium with the fazing-out of many goon-like players in the NHL. Prust’s ability to walk the line between composure and chaos will dictate whether or not Montreal can survive physically.

The stage is set and the players are waiting backstage. This all-Canadian matchup has all the makings of a closely contested series.

While the Ottawa team has much they wish to prove to themselves with most of the pieces back in place, certain individuals on Montreal—Price, Subban, and coach Therrien—carry the weight of the hockey world.

Joe Pack has written for TheHockeyWriters.com, is a member of the Society for International Hockey Research and has his own blog at www.upperbodyinquiry.com. Follow him on Twitter @JoePack