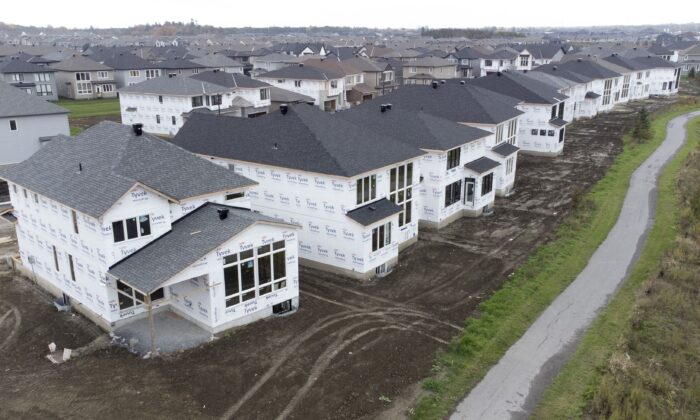 Homes under construction in a new suburb in Ottawa, on Oct. 15, 2021. (The Canadian Press/Adrian Wyld)
Viewpoints

When I was settling into the workforce in the early 1990s, the unfunded liabilities within pension plans including the CPP were the topic of the day. We were told that we would not necessarily be able to rely on pension plans to fund our retirement and the best things we could do was to take out personal RRSPs along with purchasing and paying off a house as soon as possible. That’s exactly what many of us did and now the federal government is considering taking a bite out of the home equity we worked so hard to build.

The Liberal government strenuously denies that they are considering an equity tax on the primary residences of Canadians every time the issue surfaces. We have to ask ourselves though, why does this issue keep surfacing?

The first time this issue came to a head was in July of 2020. Blacklock’s Reporter broke a story on a study commissioned by the Canadian Mortgage and Housing Corporation (CMHC) to examine ways of implementing an equity tax on the primary residences of citizens. The Liberal government vehemently denied any plans to tax home equity and Blacklock’s Reporter was accused by CMHC officials of “horrible, untrue” reporting.

During the 2021 federal election, Liberal candidate Jason Hickey called for a home equity tax. The Liberals heatedly denied any plans to tax home equity and distanced themselves from their own candidate.

In December 2021, the issue resurfaced as Carleton University Professor Steve Pomeroy released an essay calling for a home equity tax. Pomeroy is part of the Canadian Housing Evidence Collaborative which gets its funding indirectly through the CMHC. Yet again, the Liberals angrily denied they are considering an equity tax.

Now we have discovered that the CMHC funded a report from a group of University of British Columbia researchers who are calling for… you guessed it! A home equity tax!

How much smoke do we have to see before we admit there is a fire?

Home equity represents a capital pool worth trillions of dollars in Canada and it presents a plum that our cash-strapped federal government is having an increasingly hard time leaving alone. They want to take a bite out of home equity but understand Canadians would be infuriated if they did so. That could explain why the CMHC is constantly floating the idea balloon out there. They are working to desensitize us to the concept and build support for home equity taxes while shielding the government from the concept.

The language in all these reports is similar and telling. They all refer to home equity as a “windfall” and make it out as if people fell into the money. The 2020 researchers referred to it as a “lottery win,” and this latest UBC report referred to “housing wealth windfalls gained by many homeowners while they sleep and watch TV.”

What an insulting insinuation about homeowners!

It’s not easy to build equity in a home. It takes years of work for most in order to build the income, credit rating, and down payment required in order to purchase a home. It then takes more years and effort to maintain the home and pay down the mortgage in order to garner equity in that home. It doesn’t simply happen while sleeping and watching TV.

These studies are not only trying to make the case for a home equity tax, but they are trying to characterize homeowners as greedy layabouts who haven’t earned the equity gained in their homes. This isn’t research—it’s political activism using the politics of envy and division in an effort to shape public opinion.

For most Canadians, home equity is their most precious material resource. We worked hard for it and rely on it for our retirement and perhaps to hand it down to our kids. It is distressing and outrageous to think that the government feels entitled to take a part of that equity from us, yet it is clear this is where they would like to go.

Our nest eggs are at risk and we need to make it clear to the government that we won’t put up with their theft of it. They are testing the waters right now. Make sure they burn their fingers every time they try. If they can take our home equity from us, there is nothing they can’t or won’t take.