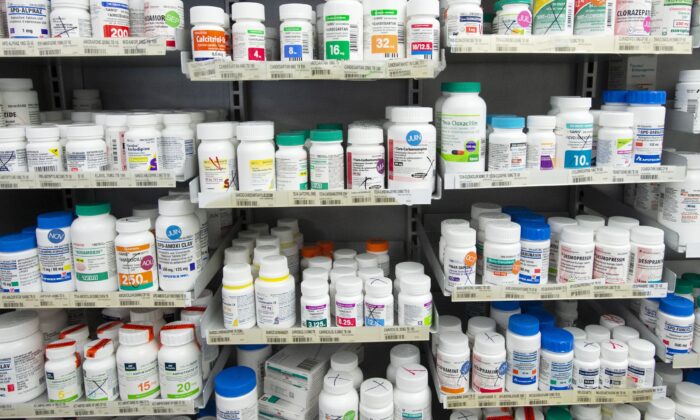 Prescription drugs are seen on shelves at a pharmacy in Montreal , Canada, on March 11, 2021. (Ryan Remiorz/The Canadian Press)
By Isaac Teo

Canadian patients are waiting on average more than 450 days longer than Americans and Europeans to have access to new medicines that can potentially improve their health or save their lives, according to a study.

The study, published by think tank Fraser Institute on May 13, found that of the 218 drugs approved in both Canada and the United States between the period of 2012/13 and 2018/19, approval was granted on average of 469 days earlier in the United States. When compared with Europe during the same period, the 205 drugs approved had been approved by Europe on average of 468 days earlier than Canada.

One reason that accounts for the delay is the efficiency of the approval process, according to Bacchus Barua, associate director of Health Policy Studies at the Fraser Institute.

“Innovative new medicines can have a profound impact on the health and wellbeing of those suffering from illness. Unfortunately, Canadians are often denied these benefits for months, if not years, waiting for government to approve drugs already deemed safe and effective by regulators in the European Union and United States,” Bacchus said in a statement released last Thursday.

The other reason is the difference in when the drug was submitted for regulatory approval in the first place, the study states.

As to why manufacturers choose to delay submitting their new drugs to Canada, the study suggests it could be due to the smaller market size, weaker intellectual property protection, regulatory controls on drug pricing by the federal government, reimbursement policies practised by insurers, and the “user fees and costs associated with creating a submission for a particular agency,” among other reasons.

One way to improve the situation, the study recommends, is for Health Canada to consider replacing their mandatory approval process with agreements that recognize the approval of new drugs by comparable international agencies such as the U.S. Food and Drug Administration (FDA) or the European Union’s European Medicines Agency (EMA), which help to remove any duplicative process.

“Under such an approach, approval by the FDA or the EMA could be considered sufficient for market access in Canada,” the authors wrote. “If Canada had such agreements with Europe and the United States (accepting approval from either body as equivalent), patients could have received access to 223 new pharmaceutical therapies (of the 224 in our sample) a median 383 (average 742) days earlier.”

Though such an agreement, Canadian patients would also likely receive access to many approved drugs currently not available in Canada—either not approved by Health Canada or not submitted by drug manufacturers for marketing approval at all, the authors added.

Moreover, the approach can still maintain Health Canada’s ability to issue safety warnings and withdraw a drug from the marketplace when necessary.

“While approvals by the FDA and EMA could be accepted as sufficient for market entry, they could also be subject to a labeling requirement stating the approval was that of the FDA and EMA and that Health Canada had not approved that particular medicine,” the study says.

“This would give Canadians and their health-care providers the opportunity to decide for themselves if they felt Health Canada’s approval process provided additional safety or protection from the risks associated with a new drug.”