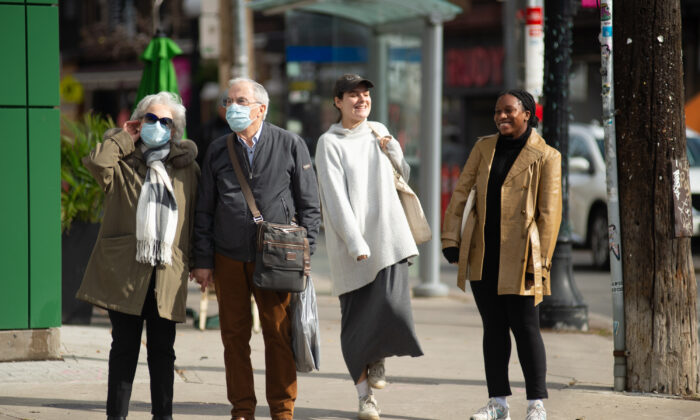 Canadians now have a much smaller appetite for COVID-19 public health measures compared to just months ago, despite warnings of a resurgence of cases fuelled by the Omicron BA.5 variant, says a recent Angus Reid poll.

The survey, published on July 20, shows just a quarter of Canadians would now support the reimplementation of a COVID-19 vaccine passport in their province, compared to when support for this measure reached its peak of 70 percent in September 2021.

Support for provincial mask mandates dropped from 86 percent in November 2021 to just 51 percent in July 2022, even though nearly three-quarters (74 percent) of Canadians say they believe masks are effective in reducing the spread of infectious viruses.

Despite holding such beliefs, few Canadians (16 percent) say they wear a mask “all the time” in indoor spaces where they are around other people, such as at a grocery store or bank. More than half (53 percent) say they do so “rarely” or “never.”

Overall, support for the public health mandates has declined significantly over time across the country, though the survey still found some differences across provinces and demographics.

In some regions, more than half of respondents would accept a mask mandate in their community, such as in British Columbia (55 percent), Ontario (55 percent), and Atlantic Canada (62 percent). This enthusiasm plummets in the provinces of Alberta (36 percent) and Saskatchewan (38 percent).

Support for vaccine passports fell even more drastically over time, the survey found.

Last September, as provinces were encouraging residents to get their first and second doses, seven-in-ten Canadians approved the idea of requiring people to show proof of vaccination to access public indoor spaces.

Less than one-in-five (17 percent) now support this policy in Alberta and Saskatchewan, while 21 percent approve in Manitoba and Atlantic Canada, followed by 26 percent in Ontario, 27 percent in Quebec, and 30 percent in B.C.

As with vaccine passports and masking mandates, Canadians have little interest in bringing back other public health measures. Just 14 percent say travel restrictions between communities in the country should return. Two-in-five (38 percent) believe the government should do nothing in the event of a new wave of COVID-19.

Men under the age of 55 were the most likely demographic to push back against public health measures, with just one-in-three supporting the reinstallation of mask mandates in their communities.

The Angus Reid survey comes as some public health officials are warning of a summer wave of COVID-19, fuelled by the Omicron BA.5 sub-variant.

With the removal of public health restrictions and the ceasing of official daily COVID-19 case reports, Canadians are left to assess their own health risks. In light of this, the survey asked respondents how they felt about the lack of data.

While half of Canadians (47 percent) said they are frustrated by a lack of COVID-19 data in their provinces, a similar number (44 percent) say they are not bothered, as “they would not get much benefit from more data,” the survey says.

Respondents were also asked about how they’d feel about the return of more regular public briefings, statistics, and increased testing and contact tracing.

About half (49 percent) say information about case numbers would help them make decisions, while two-in-five (42 percent) say that wouldn’t matter to them at all.

Fewer say they want a return of public briefings (41 percent) and increased contact tracing (36 percent). Instead, the survey found more people, around half of the respondents, saying they wouldn’t pay attention to either.