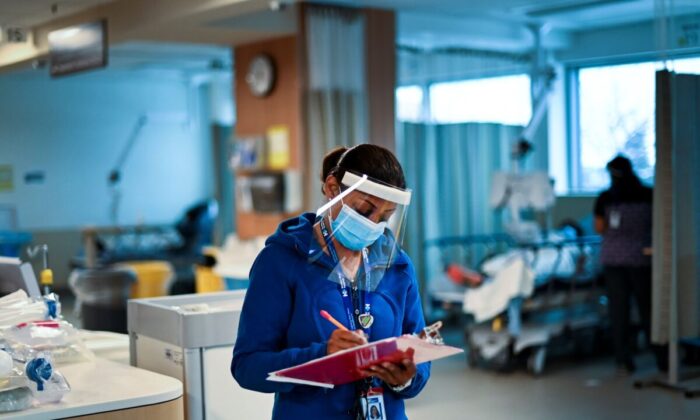 A health care worker audits a unit in a hospital in Toronto on Dec. 9, 2020. (The Canadian Press/Nathan Denette)
Canada

Many Canadians Not Aware of True Cost of Health Care System: Report

Typical Canadian family of two parents and two children estimated to pay $15,039 for public health care in 2021
By Isaac Teo

Many Canadians do not know the true cost of the country’s public health system, a new report says, noting health care in Canada is not “free” but paid for through the tax system.

This knowledge gap is partly because Canadians don’t see the bills for the medical services they use, and partly because there is no easy way for them to find out how much they pay to fund the system through taxes, according to the Fraser Institute report.

“Canadians pay a substantial amount of money for health care through a variety of taxes—even if we don’t pay directly for medical services,” said Bacchus Barua, Director of Health Policy Studies at the institute and co-author of “The Price of Public Health Care Insurance, 2021” in a press release.

The study estimates that a typical Canadian family of two parents and two children will pay $15,039 for public health care in 2021, with an average household income of $150,177. Couples with no children will pay about $13,533 while single parents with one child will pay an estimated $3,909. Single individuals will have to fork out $4,296 to finance the system.

Left on their own, most Canadians will find it difficult to work out precisely the amount they pay to the government each year as the health care insurance is being financed through “general government revenues rather than through a dedicated tax,” the report noted.

Sources of government revenues that may contribute to funding health care, according to the authors, include income tax, Employment Insurance, Canada Pension Plan premiums, property tax, profit tax, sales tax, import duties, and taxes on alcohol and tobacco, among others.

The study also observed that from 1997 to 2021, the cost of health care insurance for the average Canadian family has risen substantially by 177.6 percent, outpacing average income at 109.9 percent over the same period by 1.6 times. At the same time, it increased 3.4 times faster than the cost of clothing, 2.2 times the cost of food, and 1.7 times the cost of shelter.

Barua said showing taxpayers how much they pay for health care and how the amount has increased over time will help them to “assess the value and performance of the health-care system, and whether it’s financially sustainable.”

“When people speak of ‘free’ health care in Canada, they are entirely ignoring the substantial taxpayer-funded cost of the system,” the study concluded.